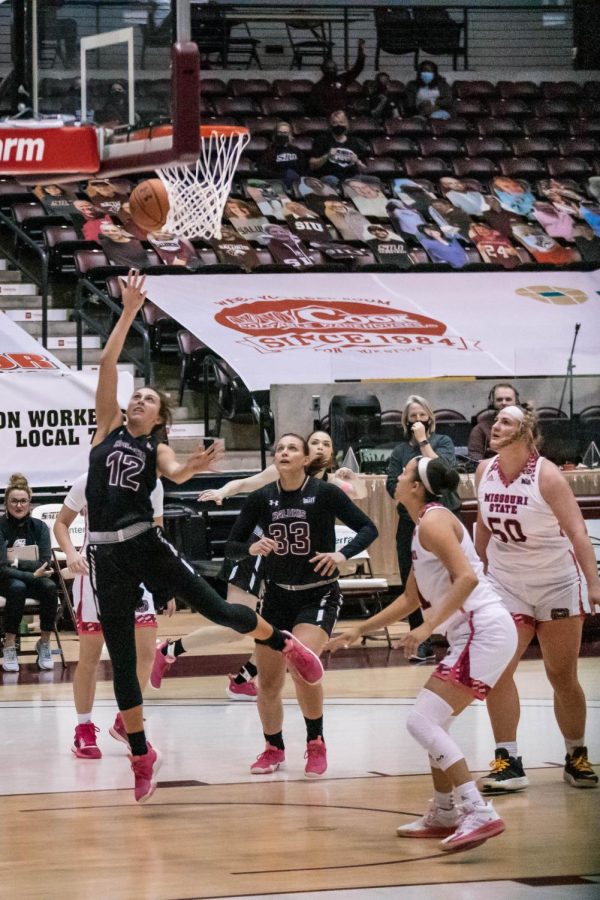 Mackenzie Silvey (12) rushes in for a layup in a game against Missouri State University Wednesday, Feb. 24, 2021, at the SIU Banterra Center.

Head coach Cindy Stein spoke on the season ender and said the team made too many crucial mistakes to beat Missouri State.

“I felt like we were close to Missouri State to be able to battle with them,” Stein said. “Missouri State is a team you can’t make mistakes against and we made too many mistakes, especially at peak times. It was a hard fought game for us, our kids battled and never gave up,”

The Salukis had the game as close as one point with three minutes left in the third quarter but the Lady Bears were able to go on a 8-0 run and get that lead to 49-40 going into the final ten minutes.

Stein spoke on why the game got away from the Salukis in the third quarter.

“There were times where we needed to get a good stop or close it in, they made great shots and got some key offensive boards. Those were things, like I said, you’ve almost got to play mistake free to beat them and we didn’t do that,” Stein said.

In the first quarter both teams saw the lead and a basket by Walker evened the score up at 17 after one quarter.

In the lower scoring second quarter Missouri State scored the final points with almost three minutes left in the half and led 28-25.

Three pointers kept the Salukis close in the early third quarter as Brockmeyer made two threes and senior forward Rachel Pudlowski alose made one to get the deficit to 41-40.

However, an 9-0 run to end the third quarter gave the Lady Bears a lead the Salukis couldn’t cut into. Missouri State led the entire fourth quarter by eight or more points and closed out the win to stay undefeated against MVC opponents this season.