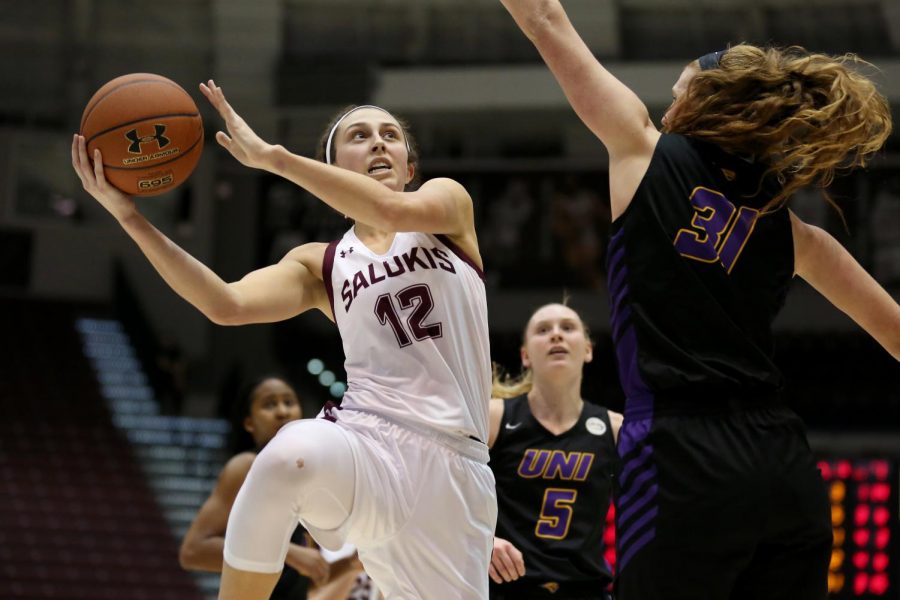 Saluki guard Mackenzie Silvey goes up for two on Friday, January 10, 2020, during the Salukis' 60-57 loss to the Northern Iowa Panthers inside the Banterra Center.

The Saluki women’s basketball program trailed Indiana State 68-59 with seven minutes remaining in the fourth quarter of their first MVC tournament game, but five consecutive field goals made by SIU over the next 3:20 gave them what they needed to retake the lead.

Indiana State was able to force overtime after ending the fourth quarter at 75-all but couldn’t carry that momentum over into the overtime as the Salukis were able to extend the lead to as much as eight. The Sycamores cut the lead down to four before a buzzer beater three to give the Salukis the 90-89 win.

Senior guard Makenzie Silvey spoke on what went right for the Salukis to go on the run in the fourth quarter and to win the game in overtime.

“We were able to get momentum by making big plays and just getting stops on defense, obviously it wasn’t much of a defensive battle tonight because it was 90-89. They had some players get hot on us and we were just able to make adjustments and were able to rebound a lot better down the stretch which was able to lead to transition for us,” Silvey said.

“I don’t think anyone was excited about our defense today but we survived it, we outscored them. Our ball movement was better, we had 24 assists, those are things we look for. Obviously we let them have too many offensive boards, when we held them to one shot possessions we played a lot better defense,” Stein said.

The Salukis were led in the game by Silvey with 23 points. Redshirt senior Gabby Walker also added 19 and five Salukis scored in the double digits. Sophomore guard Jasmine Elder led the Sycamores with 31 points.

The first quarter was back-and-forth as both teams had the lead on multiple occasions. Indiana State was able to get a two point lead out of the quarter at 23-21 after getting points from redshirt freshman guard Mya Glanton on their last two possessions of the first.

In the second quarter SIU took over in the last seven minutes going on a 16-4 to take a 42-34 lead into the half.

Indiana State turned the game around in the third quarter as they clawed back all four quarters before taking a three point lead on a late three pointer from Elder.

After the Sycamores extended the lead to eight in the fourth SIU fought back and junior guard Caitlin Link just missed a game winning attempt at the end of regulation with overtime at 75.

In the overtime SIU was able to take over, though the Sycamores were able to make it 90-89 on a three as the final buzzer sounded.

SIU will play in the second round tomorrow against the MVC regular season champion and 21st ranked in the country Missouri State Bears. The game will tip-off at 11 a.m. at the TaxSlayer Center in Moline, Ill.

Silvey spoke on the team getting another chance to play Missouri State (22-2,16-0 MVC) and said the team needs to get ready tonight for the game early tomorrow.

“We’re just going to have to really recover tonight and get our minds ready to go. Obviously that’s a really good team; they were undefeated in conference but we know we’re a really talented team as well and we finally have our entire team back healthy for the first time all year,” Silvey said.