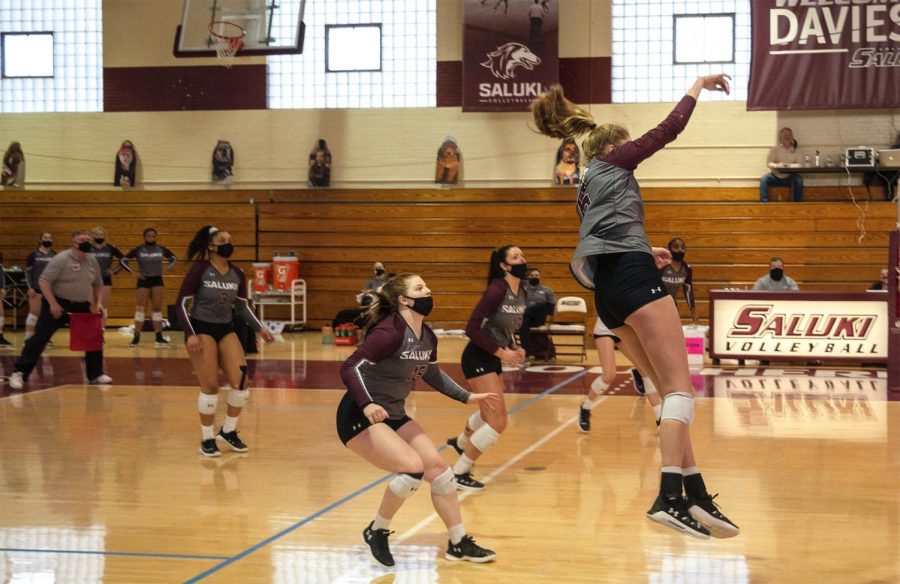 Opposite hitter, Emma Baalman (6), completes a spike just as teammates Imani Hartfield (3), Ryan Rednour (15), and Rachel Maguire (13) rush to support her Monday, March 8, 2021, at the Davies Gym, in Carbondale, Ill.

Southern Illinois volleyball (2-12,1-11 MVC) fell in four sets to Indiana State (6-7,5-5 MVC) as the Sycamores finished off the sweep of the Salukis.

Indiana State was led by junior middle blocker Madeline Williams, who had 10 kills.

Southern’s errors hindered their ability to find the win against the Sycamores: SIU had 25 errors to Indiana State’s 15. Indiana State also aced the Salukis 12 times to Southern’s six aces.

After a back and forth start between the two programs, a 6-1 run capped off by a kill from freshman outside hitter Tatum Tornatta helped the Salukis take a lead in the first set

Later in the set, Indiana State earned three-straight points but still trailed 23-18. A kill by redshirt senior opposite hitter Emma Baalman set up SIU to have set point, and an attack error from the Sycamores gave SIU the first set win.

In the second set, Indiana State got out to a 23-14 lead and the Salukis responded by going on a 7-1 run to cut the deficit to 24-21. After three-straight failed set points, the Sycamores closed out the second set on a kill by freshman middle blocker Karinna Gall.

The third and fourth sets were a struggle for SIU as they dropped both sets while not getting to 15 points in either.

The third set was closed by an attacking error for a 25-12 set win to the Sycamores.

The fourth set was closed by a final of 25-13 on a kill from Sycamores freshman outside hitter Mallory Keller.

The Salukis next match will be against Evansville in Indiana on March 14 at 6 p.m.