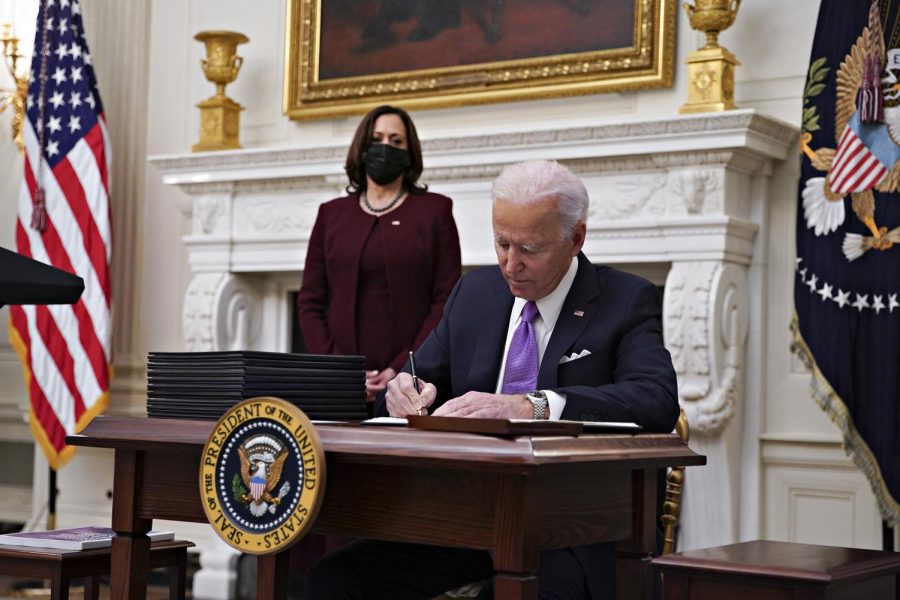 President Joe Biden signs an executive order after speaking during an event on his administration's COVID-19 response with Vice President Kamala Harris, left, in the State Dining Room of the White House in Washington, D.C., on Thursday, Jan. 21, 2021. (Al Drago/Pool/Abaca Press/TNS)

Biden is expected to name Jennifer Klein and Julissa Reynoso, chief of staff to First Lady Jill Biden, to lead the council, which will focus on creating “government-wide” proposals to help women and particularly women of color. The planned council will address a range of problems, including fighting discrimination, gender-based violence, and improving economic conditions for women, especially during the pandemic.

It marks a return to the focus on a specific focus on women’s rights after former President Trump put little emphasis on the issues. President Obama established a similar panel called White House Council on Women and Girls.

But the Biden White House stressed that the new panel would focus on issues faced by all genders. Biden will also order the Department of Education to begin a sweeping review of Trump-era changes in rules governing sex harassment and assault on college campuses.

The shifts in so-called Title IX rules bolstered the rights of those accused of misconduct and makes it dramatically more difficult for victims to prove their cases.

Biden’s move on Title IX would fulfill a campaign trail promise to roll back the Trump actions, which were spearheaded by Trump Education Secretary Betsy DeVos.

The president is expected to announce the moves at an afternoon press conference along with Vice President Kamala Harris, the first woman to serve in that office. It marks International Women’s Day, which was first celebrated more than a century and was adopted by the United Nations in 1977.