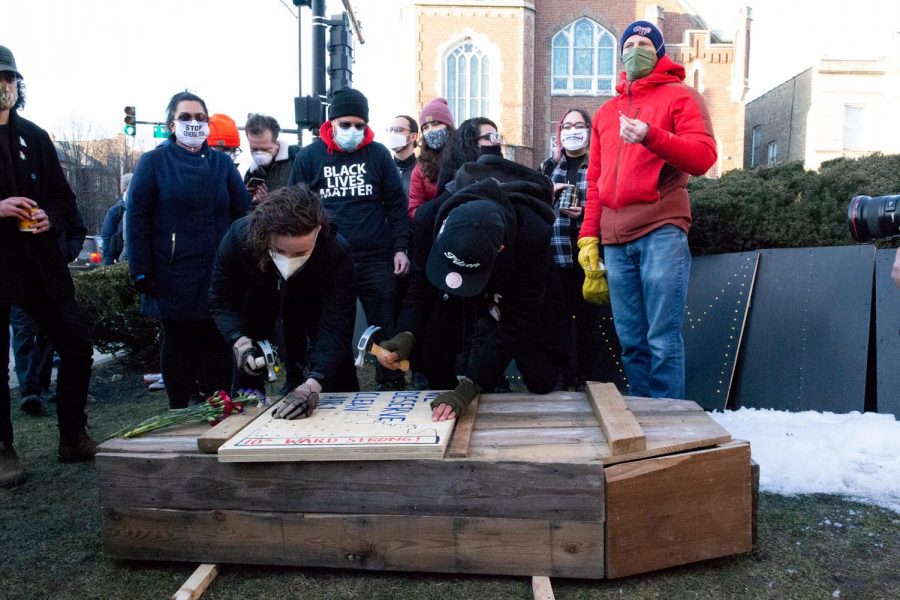 Breanna Bertacchi (left) and William Guerrero, aka “The Kid from Pilsen,” (right) hammer nails into a board that reads “WE DESERVE CLEAN AIR!” next to a map of Chicago’s 10th Ward outside Grace United Methodist Church on Mach 4, 2021. Bertacchi and Guerrero, along with other participants, hammered in a nail for every day they participated in the hunger strike against Reserve Management Group’s relocation of the General Iron scrap facility to the neighborhood of South Deering.

A Chicago hunger strike in opposition to Reserve Management Group’s (RMG) relocation of the General Iron recycling facility from the neighborhood of Lincoln Park to the neighborhood of South Deering, came to an end March 8 after a night of speeches and marching near Mayor Lori Lightfoot’s house.

During the press conference the participants and organizational supporters shared stories of their experiences with respiratory problems which they said are the result of already high levels of pollution in the area.

“I have memories of me being eight years old, hooked up to a machine holding a mask to my face just so I could breathe the next day at school,” George Washington High School student Trinity Colon said. “So this pollution and these high rates of asthma have affected southeast residents of all ages.”

The hunger strikers were joined a few days later by Yesenia Chavez of United Neighbors of the 10th Ward, Jade Mazon of Rebel Bells Collective and Kate Koval of Southeast Side Coalition to Ban Petcoke.

“Throughout the process I kept feeling energy come from places that I didn’t know I had, and it’s because of this,” Stark said.

Hunger strikes have been a tactic for southside residents, especially in cases related to schools and child welfare, for the last 30 years.

In 1995 hunger strikers, including current U.S. Representative Jesus “Chuy” Garcia, pressured the city to adjust a school bussing plan to keep kids from having to cross gang lines on the way to school, according to Chicago Magazine.

A 2001 hunger strike, organized by many of the same groups involved in the ‘95 strike, pressured the city to build Little Village Lawndale High School.

Most recently in 2015, residents of the Washington Park neighborhood staged a hunger strike to pressure the city to reopen Dyett High School.

Over 200 people gathered for the March 4 event outside Grace United Methodist Church to listen to statements by the hunger strikers and their organizational supporters who outlined their issues with the facility relocation, the mayor’s lack of communication and Chicago’s history of industrial pollution on the south side.

“In record time and quickly, a facility was relocated from an affluent community from Lincoln Park when Sterling Bay, a developer, a developer who got $1.3 billion in [Tax Increment Financing] funding to build luxury housing, have received the green light from an administration that one, campaigned against giving those subsidies to developers, and two, promised to reopen the Department of Environment and stop these kind of practices,” 25th Ward Alderman Byron Sigcho-Lopez said.

The crowd, which grew and overflowed into the street during the organizers’ speeches, eventually marched through the Logan Square neighborhood led by the band Chicago Soundbox, light-up signs and a coffin lending the ambiance of a New Orleans second line funeral celebration.

Some onlookers, like Hilton Robles and Luis Rivera, said they were also angry about the RMG facility being relocated to the southside to make room for condos.

“Why you gotta bring all that shit to me,” Rivera said. “We are humans too, right? We need fresh air.”

The march stopped to block off the six-points intersection of Belmont, Milwaukee and Diversey to give students from George Washington High School, which is a short distance from the RMG’s proposed facility site, a chance to make speeches.

Staff reporter Jason Flynn can be reached at jflynn@dailyegyptian.com, by phone at 872-222-7821 or on Twitter at @dejasonflynn.