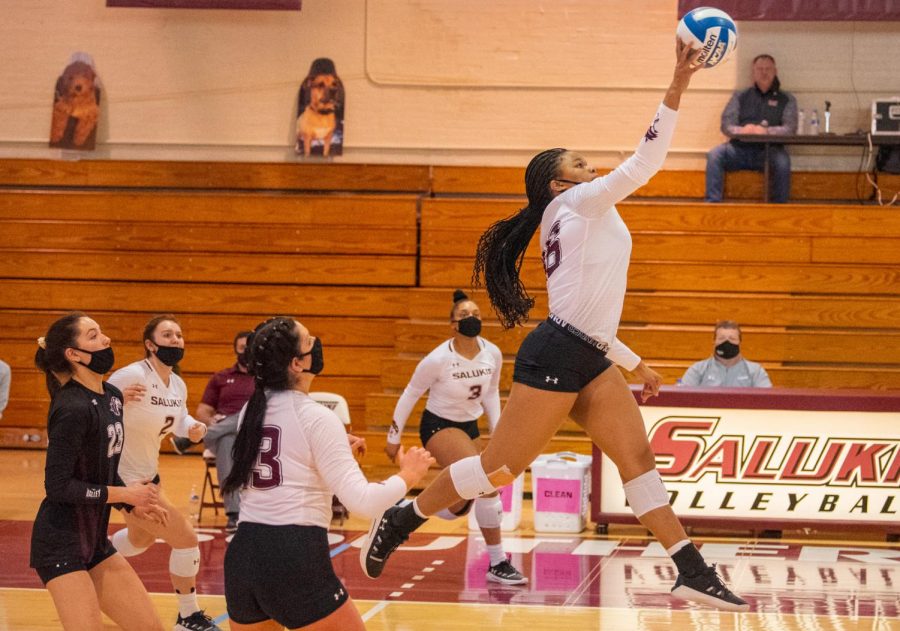 SIU's Imani Hartfield goes up to spike the ball over during the game verse Indiana State on Sunday, March 7, 2021 in Davies Gym at SIU. The Salukis' would go on to lose 3-0 to the Sycamores.

The Salukis were led in kills by redshirt freshman outside hitter, Alex Washington, with nine, while the Sycamores got 10 kills from sophomore outside hitter Taylor Shelton.

At the start of the first set, SIU got out to a 4-2 start after a kill from redshirt senior outside hitter Emma Ballman. But the Sycamores responded with a six-point run to take an 8-4 lead.

A kill by Washington helped the Salukis cut the deficit to 10-9 but Indiana State was able to hold the lead through the rest of the set. They closed out the first set at 25-19 with an ace from sophomore setter Chloe Mason.

In the second set ISU got out to a quick start taking an 8-1 lead. The Salukis never caught back up and dropped the set 25-11.

The third and final set was a close one as SIU trailed 15-10, but responded with a 10-5 run that was capped off by a kill by freshman outside hitter Tatum Tornatta to tie it all up at 20.

The Sycamores came back to take a 23-21 lead, but SIU responded with two-straight points to tie it all up at 23.

A service error by the Salukis gave ISU the 24-23 lead and set up the match point. On their first chance the Sycamores got the win on an attacking error to close out the third set.

SIU will look to bounce back tomorrow, March 8, when they host Indiana State again at 3 p.m. at Davies Gymnasium.