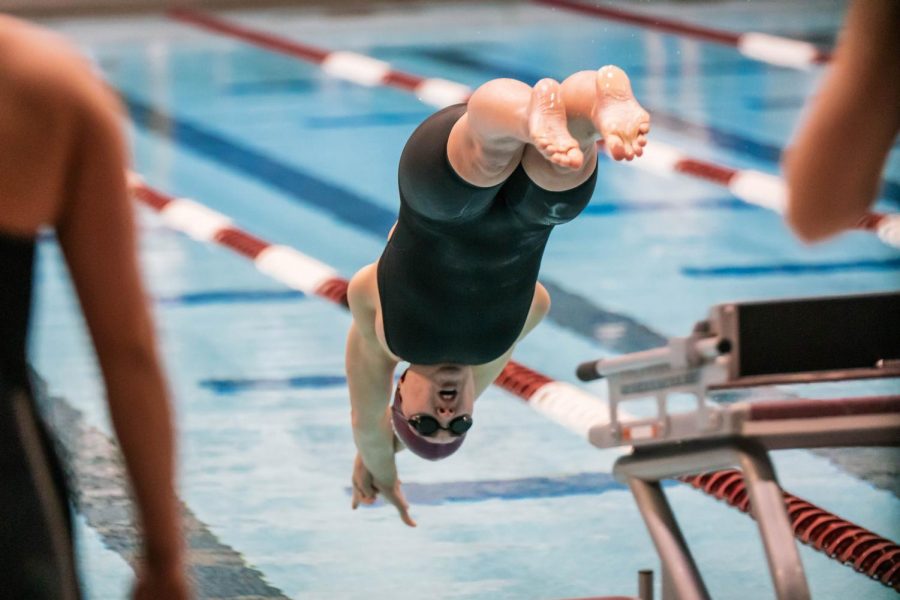 SIU junior, Anna Stephan, dives into the water in a meet against Missouri State University Saturday, Mar. 6, 2021 at the SIU Student Recreation Center.

The Saluki swim team faced Missouri State on Mar. 5-6 at the Shea Natatorium. The Saluki men’s swimming and diving program found victory for the first team since 2006, but the women’s team was defeated.

Freshman Gustav Persson made his personal best and won first place  in the 100-breaststroke with 56.86.

Sophomore Terry Yang took home third place in the 500-freestyle with 4:41.02, which is also his personal best.

Finishing second on the three meter dive was junior diver Kyle Campbell, with a score of 280.95.

Freshman Marc Avery earned the first place spot in the 100-freestyle with a time of 44.58.

The women’s team was defeated by the Bears on the last day of competition, losing 153-195.

The Salukis fought for points in the 50-freestyle, taking home second, third and fourth place. Freshman Gaby Jenkins took second with a time of 24.13, while junior Abbey Desmet and freshman Madi Jager came in third and fourth.

Brown made her best score of the season on the three-meter and won second place with a score 255.45.

The 200-medley relay team of Romero, Zaborska, senior Imogen Watson and senior Sierra Forbod made a new school record and took home second with a time of 1:41.06.

Romero earned the first spot in the 100-backstroke with 55.75, while Watson took home second place with a time of 56.47.

The men’s team nearly beat out the MAC Champions, 176-173, on the second day of competition.

Cernek secured first place in the 100-backstroke with a time of 49.03, while freshman John Cameron finished in third and earned his personal best with 52.06.

The Salukis finished second, third and fourth in the 400-IM, with Cernek finishing in second with 3:57.98, while freshman Sam Flessner finishing third (4:07.53) and junior Drake Manuello finishing fourth (4:14.11).

The Salukis will host a tri-meet against Vapariso and Arkansas, Little Rock on Mar. 12 in Carbondale.