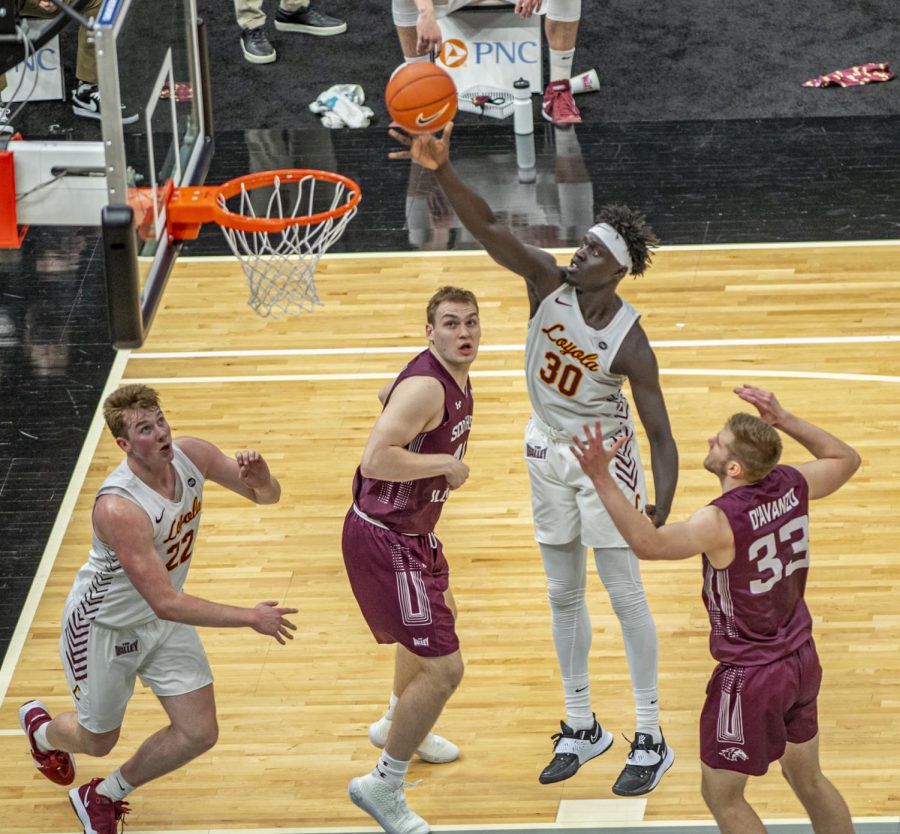 Both Kyler Filewich and Anthony D'Avanzo watch as Loyola's Aher Uguak goes up for the score during the Salukis' 49-73 loss against Loyola in the Arch Madness tournament on Friday, March 5, 2021 at the Enterprise Center in St. Louis, MO.

With both sophomore forward Marcus Domask and sophomore guard Lance Jones out due to injury the short handed Salukis fell to Loyola 73-49.

“For them to come in here losing Lance and to play so hard, they just ran out of gas,” Loyola head coach Porter Moser said.

Sophomore guard Lance Jones went out with an ankle injury and was unable to play in today’s game.

“They were really strapped with their depth with the injuries,” Moser said.

Southern struggled to get a score in the opening four minutes of the game, getting six attempts but none of them falling as the Ramblers pushed out to a 10-0 lead.

After over four minutes of no scoring senior forward Anthony D’Avanzo got the Salukis on the board with a jumper and a three-pointer cutting the Loyola lead down to nine in the first half.

“They stuck to what they did best. They’re a great team, a great defensive team,”sophomore guard Trent Brown said. “We didn’t hit timely shots at certain times, especially at the beginning when we had some pretty good looks.”

D’Avanzo hit his second three-pointer of the half,which cut the Loyola lead down to seven but the Ramblers answered with a layup by senior forward Cameron Krutwig to make it 19-10 in favor of Loyola.

A 6-2 run by the Salukis, with four points from freshman guard Dalton Banks brought the Loyola lead down to 21-14 at the 8:52 mark.

“There is no quit in any person on our team,” Brown said. “It’s something we grew through the entire season, just setbacks, injuries, and COVID, we always found a way to bounce back.”

The Salukis were down eight after a jumper by sophomore guard Steven Verplancken Jr., but a 11-0 run by Loyola doubled the SIU score at 32-16 with 3:37 left in the first half.

“ We didn’t play our best today obviously, give a ton of credit to Loyola, a top 20 team,” Bryan Mullins Saluki head coach said. “Our guys have done an incredible job this year, we’ve responded every time there’s been some adversity to our team.”

In the last three minutes of the first half, SIU went into the paint more with buckets from freshman center Kyler Filewich and D’Avanzo the Salukis found themselves down 11.

Krutwig was the last player to touch the ball in the first half and he backed Filewich down for a layup which did not fall as Loyola went to the locker room up 35-22.

Southern struggled to get a basket to open the second half, with Verplancken accounting for the only shot in three minutes while Loyola scored eight points to lead 43-24.

A scoring drought of over four minutes helped the Ramblers extend their lead out to 29 by the 13:53 mark of the second half.

The Salukis attempted to cut into the Loyola lead multiple times in the second half cutting the lead down to as low as 22 at the 4:25 mark after a layup by  Brown.

“They’re one of the best defensive teams in the country, so give them a ton of credit,” Mullins said. “Last two and a half weeks they’ve only played three games and all three of them have been against us.”

SIU could not overcome the deficit and fell 73-49, ending their season in the quarterfinals of the Missouri Valley Conference tournament.

“I just think the way the guys have always responded this year shows that their winners,” Mullins said. “I think with young teams they don’t always how to do what it takes but they’re learning.”

The loss marks the end of the season for the Salukis, but despite finishing the season with a 12-14 record, Southern did claim some awards.

Jones was named to All- MVC third team after averaging 13.4 points per game and getting 35 steals this season.

In a year where JD Muila was originally slotted to be the starting center for Southern, Filewich filled in nicely for the injured Muila with his efforts this season he was named to the MVC all-freshman team.

Even though they lost in the quarterfinals this year, the goal is to make it to Sunday and win the MVC championship, and the Salukis look forward to one day doing that.

“You get the first taste of victory here in this arena,” Brown said. “All you wanna do is get more, you crave more. I know our team is extremely confident no matter what. All we wanna do is get to that Sunday and we will be there.”