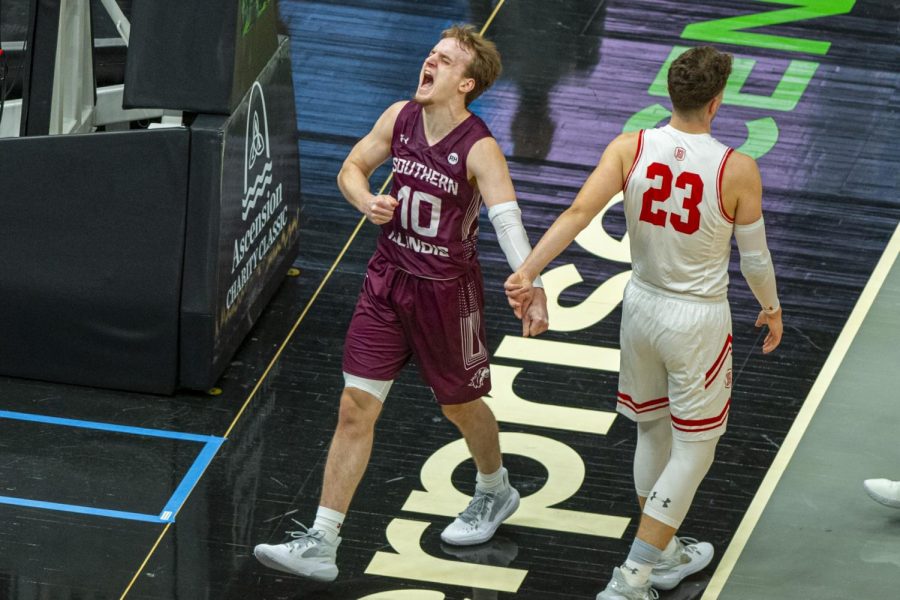 SIU guard Ben Harvey gets hyped after a foul was called on against Bradley during the Salukis' 73-63 win over the Braves on Thursday, March 4, 2021 in St. Louis at the Arch Madness Tournament.

Southern Illinois men’s basketball advanced in the Missouri Valley Conference Arch Madness tournament on Thursday night in St. Louis, taking down the ninth-seeded Bradley Braves by a score of 73-63.

Despite an early injury to sophomore guard and the Salukis’ top scorer this year Lance Jones, the Salukis found a way to earn the win and advance in the tournament. Head coach Bryan Mullins spoke on that and said he’s proud of the team for finding a way to win.

“I’m proud of our guys. It’s been next man up throughout this year and everyone contributed,” Mullins said.

Harvey spoke on his performance and said the team has a “next man up” mentality and the team worked together very well.

“One of our best players goes down and it’s the next man up, we all believe in each other day in and day out… the next man stepped up, we all stepped up and got good shots and played good defense,” Harvey said.

Mullins discussed the performance by Harvey: “Ben was aggressive you know when he’s aggressive and playing downhill like that with really good pace on both sides of the ball is when he’s had his best games for us this season.”

Freshman guard Dalton Banks spoke on the Salukis’ performance today and said the team wants to be playing their best basketball in March.

“The goal is to be playing your best basketball in March and obviously we took Loyola down to the wire a couple times late in the season. It’s huge for us, but I don’t feel like we’re done,” Banks said.

The Braves were led tonight by Redshirt freshman forward Rienk Mast with 24 points and ten rebounds.

The Salukis got off to a good start with Jones scoring the teams’ first six points on two three-pointers to get the Salukis a 6-2 lead.

Mast scored five quick points to even up the score at 11 with 15:03 left in the first half.

A couple possessions later, Jones went down with an injury to his leg and didn’t return to the game at all.

Harvey took over for the Salukis down the stretch in the first half, scoring nine of the team’s final 12 points and getting SIU out to a 38-32 halftime lead.

The second half started very back and forth with neither team really outsourcing the other, as SIU led by seven with 12:27 remaining.

An 8-2 run by the Salukis had their lead to a game-high 13 points on a layup by senior forward Anthony D’Avanzo.

Bradley tried to cut into the lead, cutting it down to five with under two minutes remaining, but Harvey was able to seal it for the Salukis with an and-one play.

Harvey spoke on that play and said the defense committed too much to the three and that’s why he decided to drive in.

The Braves weren’t able to make it a game at that point and fouled multiple times late to get to a final score of 73-63.

The Salukis will look to move on tomorrow when they play the one seed and nationally-ranked Loyola University Chicago Ramblers at 11:00 a.m. at the Enterprise Center.