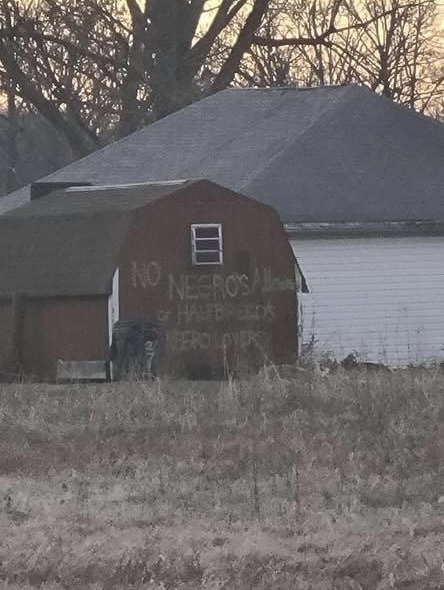 By Sophie Whitten and James Allen

*Editor’s Note and content warning: While it is the Daily Egyptian’s policy not to print uncensored racial slurs as they appear in quotes or written statements/paraphrases, we do not blur or censor photographs. Two of the photos in this story contain racial slurs.

On Tuesday, March 2  Gavin Topp, a mixed-race American, posted on Facebook that his neighbor painted a racist statement on the side of his shed. In the previous post, Topp said, “I’m in need of some help. I have a dangerous neighbor who keeps harassing, stalking, and making threats on the lives of everyone who lives with me. He’s even gone as far as to say he’ll kill the unborn child of my brother’s.”

The message on the shed read: “No negr**s allowed or half breed’s n*gro lovers” (uncensored).

Topp, 19, of Murphysboro said the issues he and his three roommates have had with his neighbor, Michael Etherton, began over a year ago and have continued to increase in severity. He said the first official complaint they made against him to the police was for disturbing the peace by loudly driving his four-wheeler near their house late at night.

“When we first moved in, he actually seemed like a really good guy […] Right after we moved in, he started bringing his four-wheeler down here and just causing lots of problems like in the middle of the night, three, four o’clock in the morning, riding that four-wheeler in front of your house, waking all of us up. It’s just impossible to sleep with that,” Topp said.

Topp said yesterday afternoon, the tensions between them escalated enough that Etherton brought his shotgun outside and fired it three times into the air.

Both Topp and his roommates have complained to the local police and sheriff’s departments about the issue, but have not made much progress.

“We went up to the courthouse the first time and I went there by myself and the ladies there, they just tried to downplay the situation and it was met with a whole lot of attitude, which I couldn’t understand why. I’m sitting there, telling them that I’m fearing for my life, and they just didn’t take the situation seriously at all,” Topp said.

Topp said that he first contacted the police last summer and has recontacted them around five times since then.

He said the best help and advice they were given was to install cameras around their house as well as receive an order of protection against Etherton.

When asked about the problem, Lieutenant Carson Bunton of the Jackson County Sheriff’s Department said they can not release any information about past complaints against the neighbor and only received their latest complaint yesterday.

Etherton denied harassing Topp and said he isn’t a racist. He denies owning a gun.

The Daily Egyptian News Desk can be reached at [email protected]