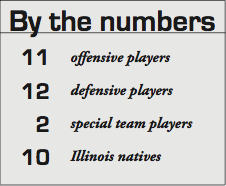 On a day when thousands of high school football players, junior college transfers and walk-on students signed their letters of intent to play Division I football, SIU signed some of their own.

The Salukis signed 25 football players Wednesday on National Signing Day. Thirteen players were from high school, five were walk-on recruits and seven were Division I transfers.

Coach Dale Lennon said recruitment has changed over the past five years and is now a 365-day process. He said he is proud of the work his staff put into recruiting players.

“It used to be when you got a verbal commitment, you could kind of relax and move on to the next man up,” Lennon said. “But nowadays when you get a verbal, you really have to work hard on maintaining that player.”

The Salukis maintained many of their commitments, especially out of Illinois.

Of the 25 recruits the Salukis signed, 10 came from Illinois, and another five came from Georgia.

Most of this year’s recruits will redshirt their freshman season, but two recruits that could see playing time for the Salukis are freshman walk-on Josh Jahnke and junior college transfer Ken Malcome.

The Salukis lack depth at the long-snapper position, and Lennon said Jahnke will compete right away to be the starter.

“Jahnke puts up extremely impressive numbers snapping the long snap and the short snap and we think Josh has a chance to potentially play for us next fall,” Lennon said.

Malcome, a transfer running back from the University of Georgia, could see minutes for the Salukis next year in the backfield.

Malcome started the first game of the season last fall for the Bulldogs and Lennon said the program’s reputation with running backs helped in Malcome’s recruitment.

“He was aware of some of the guys that have played here before and he wanted to go someplace where he had an opportunity to play,” he said. “We’re excited to have him in the program and we’re looking forward to seeing where his level is at this spring.”

The Salukis have failed to make the postseason for the past three seasons. Hopefully, with their new batch of players coming to the program they can reverse that trend.