The Equality Act passed the House again, but is likely to die in the Senate 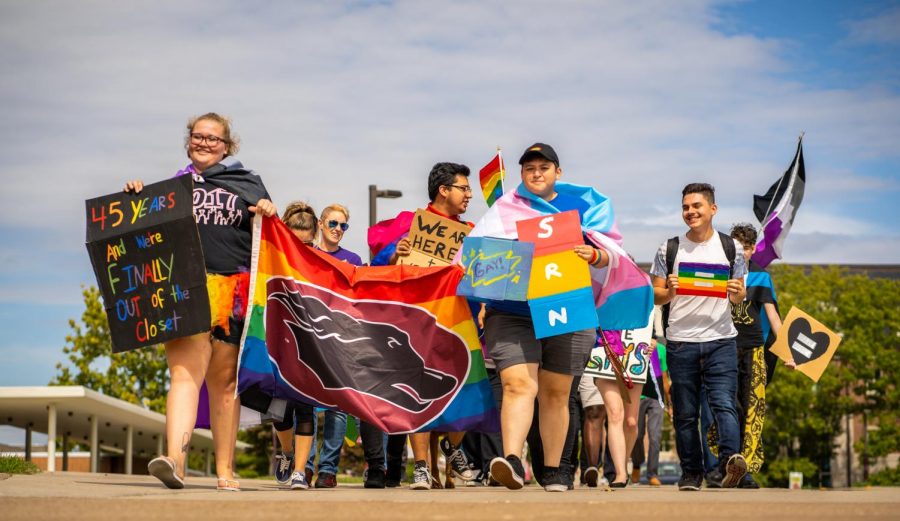 Members of the Saluki Rainbow Network walk around campus Monday, Oct. 1, 2018. The RSO put on the LGBTQ+ Pride Walk to spread love and acceptance across the campus community. (Dillon Gilliland | Daily Egyptian)

For the second time in two years H.R.5, popularly known as the “Equality Act,” has passed through the House of Representatives, but is predicted to lose in the upcoming Senate vote.

If passed, the bill would amend the Civil Rights Act of 1964 to include protection under the basis of sexual orientation and gender identity.

In 2019 the Equality Act passed through the House of Representative with a 236-173 vote, divided largely across party lines, but still garnering some bipartisan support.

The latest vote count of 224-206 showed a far greater partisan divide and only three Republicans joined a united Democratic party in support of the bill.

Supporters of the bill stress the importance of adding the new wording to the Civil Rights Act as a means of solidifying the protections it would afford.

Those Those who oppose the Equality Act say it would harm religious freedoms and endanger sex-based rights afforded to women.

“Without question, we need to provide for protections for LGBTQ Americans, and at the same time, defend religious liberties,” Adam Kinzinger, a Republican Rep. from Illinois, said in a press release.

Prior to the House vote on H.R.5, Rep. Marie Newman (IL-3) and Rep. Marjorie Taylor Greene (GA-14), whose offices are across from one another, had a dispute over Twitter.

Newman posted a video of herself placing a Trans flag outside her door, in response Greene put up a sign reading “There Are Two Genders: MALE & FEMALE,” leading to criticism from within her own party.

“The right time to pass this act was decades ago, the second best time is right now,” Newman said.

All of Illinois Representatives vote along party lines in both 2019 and 2021.

Illinois’s Democratic Senators Richard Durbin and Tammy Duckworth cosigned the bill and are unlikely to change their position.

Despite all the publicity and a Senate now controlled by Democrats, the Equality Act will likely see the same result as 2019.

Even GOP moderates Susan Collins, who cosponsored the bill in 2019, and Mitt Romney are unlikely to cross party lines for the upcoming vote.

With the filibuster available and Republicans holding more than forty seats in the Senate, there is little chance H.R.5 will reach President Biden’s desk where he promised, should it pass, he would sign it into law.