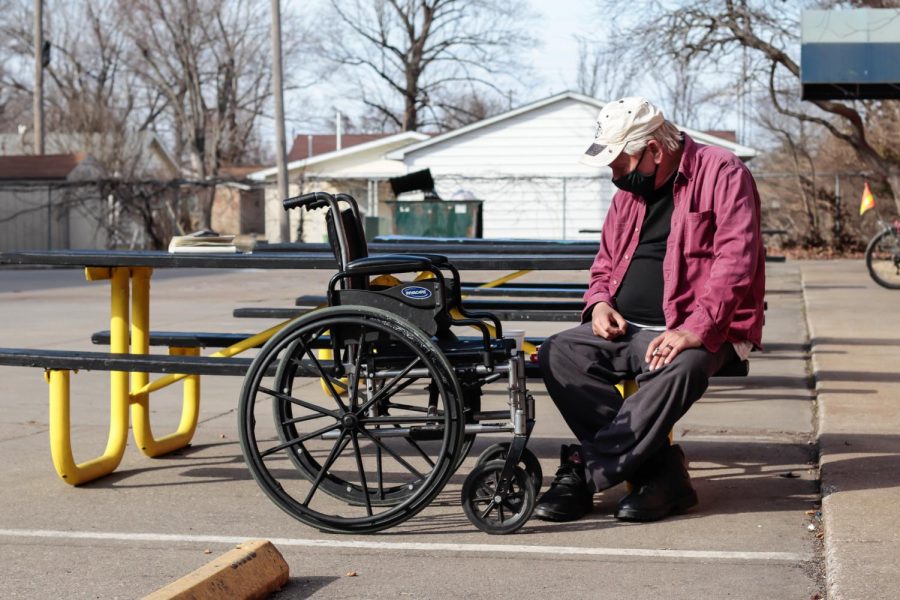 A Homeless military veteran, who did not wish to give his name, sits outside of the Carbondale Warming Center Feb. 25, 2021, in Carbondale, Ill. “Most people here have got some kind of story,” he said. Sophie Whitten | @swhittenphotography

Carbondale city officials discussed investing in programs for the homeless community if the city receives additional funding from the state and federal government.

Carolin Harvey, a city councilwoman of Carbondale, said the city has made contributions to the homeless community, but there’s currently no long-term plan to end homelessness since local organizations assist the homeless population.

Harvey said investing in more programs is limited due to funding, but the Warming Center could seek additional funding from the state and federal government.

“If that’s what the funding was designated for, you can get funding for housing and job programs. A better scenario would be the Warming Center applies for those funds on their own so it doesn’t have to be funneled through the city, so they have full control of those funds,” Harvey said.

Carmalita Cahill, the executive director of the Carbondale Warming Center, said the center is a place where guests can find shelter and additional resources during the winter season.

“We started as a warm and safe place for people to sleep and get connected to resources from  8 p.m. to 8 a.m. throughout the winter months. When COVID-19 hit, we went to 24 hours,” Cahill said.

Cahill said her job as the executive director includes finding funding for the center since the center relies on donations from the community.

“As the executive director, I work on trying to find funding to keep us going and I work day-to-day. […] One of the ways to make donations is going to our website, cwcentered.org,” Cahill said. “Community members that would like to donate can use the donate now button, we’re always in need of the things we go through often like, disposable plates, silverware, cups.”

The Warming Center also offers groups for men and women and there’s a program for employment opportunities.

Lee Fronabarger, a city councilman of Carbondale, said if the city receives additional funding from the state and federal government, there can be more investments in homeless programs.

Fronabarger said homelessness is an issue the community must tackle together, but the city did make an effort to tackle the problem by opening the Warming Center two years ago.

Diana Brawley Sussman, the director of the Carbondale Public Library, said the Warming Center was created to assist the homeless population during the winter.

“The city has done a lot for the Warming Center, we’re in a city-owned building which they brought up to code for free and they don’t charge us rent,” Sussman said. “The Warming Center currently doesn’t have any on-going annual grant funding the way the other shelters do. We’re entirely dependent on donations so we can’t afford to be open 365 days a year with our current funding sources.”

The center relies on donations from the community.

“The community has been outstanding in its support of the Warming Center, when we get to the end of the season, we’ll have to decide to what extent we can continue to provide services before next winter,” Sussman said. “We don’t know for sure what that looks like, we have a meeting planned within the next couple of weeks to determine what we’ll do.”