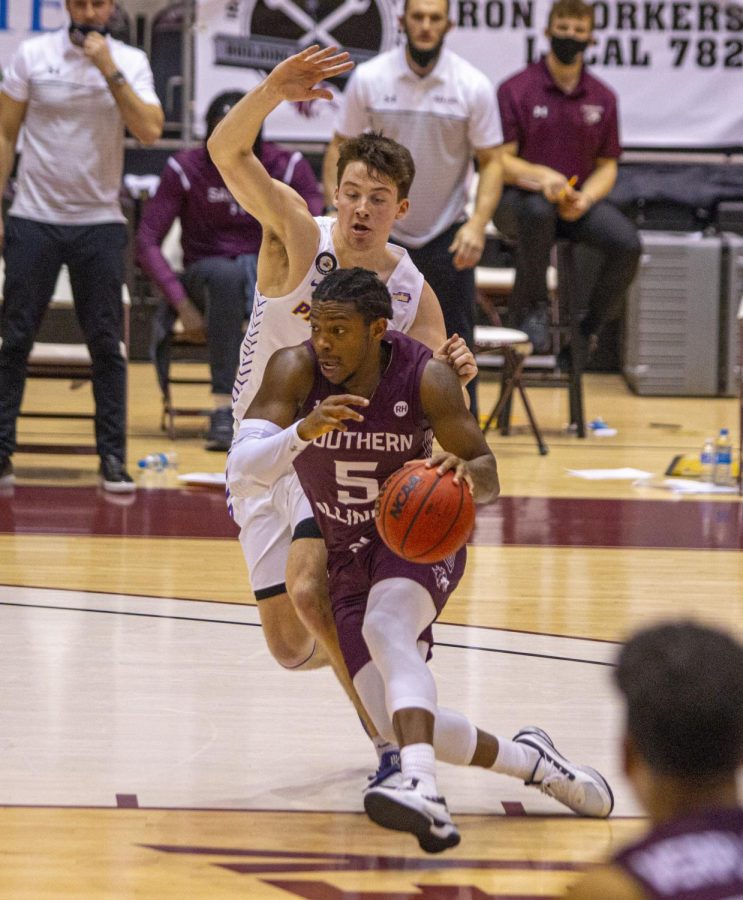 SIU guard Lance Jones drives hard into the lane vs. Northern Iowa on Sunday, Jan. 31, 2021 in the Banterra Center at SIU. Jones score 27 points in the Salukis' 71-68 win over the Panthers.

Despite 19 second-half points from sophomore guard Lance Jones, SIU fell to Loyola in overtime with a final score of 65-58.

“It felt good, the rhythm, everything was just felt like it was going our way,” Jones said. “We were getting stops on the defensive end.”

Jones would finish the game with a career-high in points with 30, including five three-pointers.

“I just basically got into a rhythm, started off by going downhill,” Jones said. “That led to a couple wide open threes.”

Jones put in 19 points in the second half tying the game with two free throws with 21 seconds left, but a 8-0 run in overtime led to the win for the Ramblers

“It hurts. I felt like we played extremely hard to the No. 21 team in the nation,” Jones said.

Loyola (21-4, 16-2 MVC) jumped out to a quick 4-0 lead, but a jumper by Jones and a layup by senior forward Anthony D’Avanzo brought the Salukis into a four-all tie.

After being down by four, Jones made a three-pointer to pull Southern within one, but the Ramblers answered with a three-pointer of their own to push back out to a 13-9 score at the 12:23 mark of the first half.

With SIU down one point nine minutes into the first half, sophomore guard Trent Brown got a steal and pushed the ball up to sophomore guard Ben Harvey. Harvey was called for a travel violation, however,  marking the eighth turnover of the game for Southern.

Turnovers plagued the Salukis in the first half against Loyola;the Ramblers forced 13 turnovers which they turned into 12 points.

“We’ve gotta take care of the ball that’s one of our biggest things this year,” head coach Bryan Mullins said. “When we have less than 10 turnovers you see we’re a really hard team to beat.”

Southern found themselves down 17-16 with nine minutes on the clock in the first half, and a scoring drought of over five minutes pushed the Ramblers out to a 29-16 lead with three minutes left in the half.

SIU ended their scoring drought with a drive to the bucket by D’Avanzo,  but the Salukis trailed 31-18 with under three minutes left in the first half.

The Salukis offense picked up the last three minutes of the half trading buckets with Loyola, as a last second three-pointer by sophomore guard Steven Verplancken Jr. had Southern down 38-25.

SIU pulled to within seven in the opening five minutes of the second half with a 10-4 run led by two three-pointers, one from D’Avanzo and one from Jones.

The Saluki defense held the Ramblers to no field goals for over three minutes, but two free throws by Loyola had them leading 44-36 at the 13:34 mark.

With under nine minutes remaining in the game, SIU had outscored the Ramblers by eight in the second half, with Jones leading the way for the Salukis with 10 points in the half with Southern trailing 50-45.

Jones with two more three-pointers gave Southern their first lead of the game with a 10-0 run as SIU led Loyola 51-50 with 4:50 left in the game.

Jones went to the free throw line with Loyola up one, and he made one of his two attempts to tie the game, but Loyola was able to get a shot off with two seconds left on the shot clock to take a 56-54 lead with 1:48 left in the game.

Jones was fouled on a three point attempt with 21 seconds left in the second half; he made two of the three free throw attempts to tie the game.

Loyola took a last second three-pointer to end the second half that did not go in as SIU forced overtime at Gentile Arena.

“At the end of the day we had a chance in overtime,” Jones said. “We got them right where we wanted them.”

After a layup by Jones the Salukis led by one in overtime, but eight-straight points by the Ramblers closed the game with a win for Loyola 65-58.

“We feel really confident we played against a good Loyola team, we did really good,” Jones said. “I like where we are and I like where we’re going. We have confidence built up, we’re going to take that mentality to the tournament.”

The loss pushed SIU into the Thursday night games on Mar. 4 in the Missouri Valley Conference Arch Madness championship tournament with the ninth seed the Salukis will match up against Bradley with tipoff set for 5pm.

“I think we’re continuing to get better. First time we’ve had three or four weeks of continuity together really all year,” Mullins said. “I think we’re going to continue to get better, our defense we’re being more connected, offensively when the ball moves I think we’ve got a pretty efficient offense.”