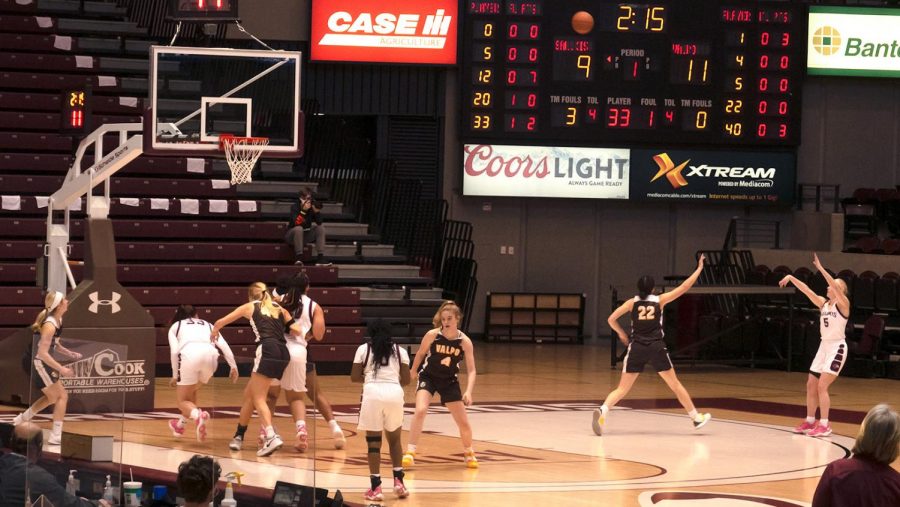 SIU guard, Caitlin Link (5), shoots the ball from a distance attempting to catch the team’s score back up to the Valparaiso Crusaders Saturday, February 27, 2021, in Carbondale, Ill.

“I didn’t feel like we executed the game plan [and] we didn’t take care of the ball. The only thing we did well was we rebounded well,” Stein said.

The Salukis tied the score, 5-5, after a three-point basket from Silvey and a layup from junior guard Caitlin Link.

Southern took a three-point lead with a layup and basket from Silvey.

Valpo regained the lead 11-9, after a layup from senior guard Grace White and a three-pointer from redshirt senior forward Caitlin Morrison.

SIU tied the score again with just under two minutes left in the first quarter with a layup from senior forward Rachel Pudlowski.

Valpo decreased SIU’s lead to one point after a three-point basket from White and layup from Weinman.

Scoring went back-and-forth between the two teams, but the Salukis managed to stay ahead 24-21.

The score was tied once again at 24-24 from a three-point basket by Valpo’s Frederick.

“We absolutely did not want them to have a three-ball,” Stein said.

Valpo and SIU started the second half early with a layup and three-pointer from Morrison and a layup from McCallister.

After a layup from Weinman, Valpo led 40-35 halfway through the third quarter.

Valpo held their largest lead of the game at nine points after a three-point shot from Morrison.

An eight-point run from Valpo increased their lead to 51-37, with scoring from Morrison, freshman guard Lauren Gunn and Frederick.

Both teams continued scoring at the end of the third quarter, but Valpo kept the 15-point lead 59-44.

The Salukis continued fighting to decrease Valpo’s lead with layups from Silvey, Link and Walker, making the score 62-50.

Three-point baskets from Morrison and Frederick brought Valpo’s lead back up to 13 points near the end of the fourth quarter.

Although the Salukis continued to score at the end of the quarter with a three-pointer from McCallister and layup from Walker, it was not enough to gain the lead, and Valpo won 75-64.

The Salukis will take on Valpo again on Feb. 28 at the Banterra Center at 4 p.m.