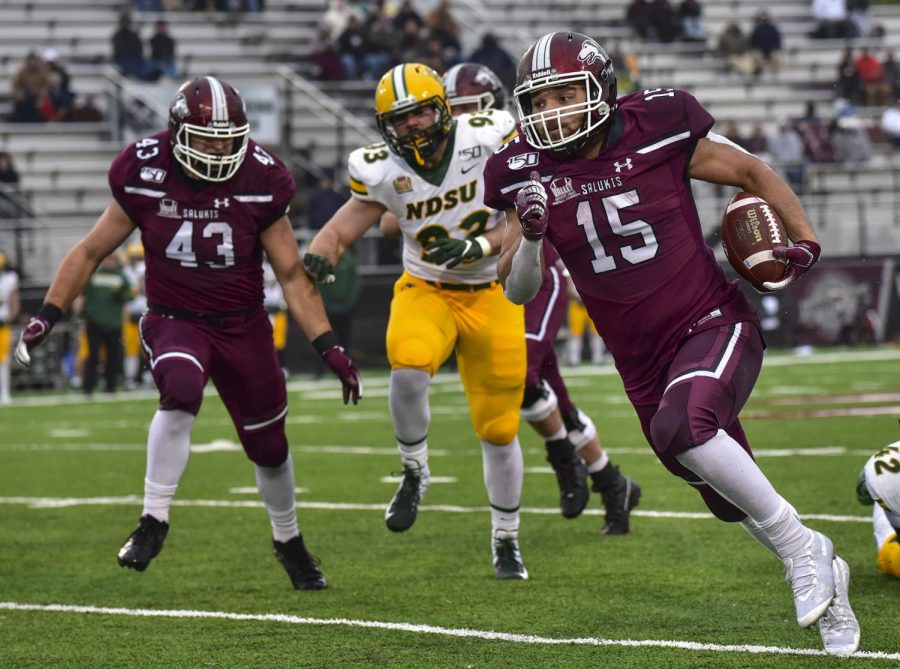 Javon Williams Jr., of Centralia, runs past a defender on Saturday, Nov. 23, 2019, at the SIU vs. North Dakota State Football game in Carbondale.

North Dakota State’s 39-game winning streak has been ended by the Southern Illinois University Salukis (2-1,1-1 MVFC), who pulled off the 38-14 upset victory against the winners of eight of the last nine FCS championships.

The Saluki defense allowed only 14 points over the course of four quarters of play to the Missouri Valley No. 1-ranked Bisons (2-1,1-1 MVFC).

A dominant defensive start along with a few big plays by Avante Cox got the Salukis out to a 17-point lead, which they maintained throughout the entire game.

SIU Head coach Nick Hill said the turnover margin was the biggest difference in the game.

Hill discussed the defense as well and said not many teams have done what they did to the Bison.

“There’s not a lot of teams that dominate the line of scrimmage against North Dakota State in the last, I don’t know how many years. I felt like they had the right mindset and had a great plan moving around a lot and guys made plays and put them in more predictable down and distances,” Hill said.

SIU opened the game with the ball and drove past midfield, but weren’t able to put points on the board. The Bison then punted after getting one first down on their opening possession.

The Salukis went on an over seven-minute drive that was capped off by a 39-yard field goal by senior kicker Nico Gualdoni to open the scoring. The Salukis would take that 3-0 lead through the end of the first quarter.

NDSU would go three and out at the beginning of the second quarter and the Salukis were able to score once again after a 93-yard drive with a 3-yard touchdown run by sophomore running back Romeir Elliot putting the Salukis up 10-0.

NDSU was able to force SIU to a fourth down and goal play, but the Salukis were able to find the endzone after a one yard run from Javon Williams Jr.  moving ahead 17-0 with 55 seconds left in the first half.

The first touchdown for NDSU came off a 37-yard pass from senior quarterback Zeb Noland, which was caught by redshirt freshman wide receiver Jake Lippe on the last play of the first half, cutting into SIU’s lead at 17-7.

The late touchdown by the Bisons left SIU discussing in the locker room at the half how to maintain their momentum.

“We’ve been in this position many times in the past going into the half with a lead and came out of the half and ended up losing the game. So the focus right there was to make sure that everyone stayed focused, never too high, never too low,” senior linebacker Bryce Notree said.

A critical moment in the game came with just over a minute left in the third quarter, with the Salukis up 17-7, when sophomore safety Clayton Bush got a strip sack that was recovered by the Salukis.

Notree also spoke of the importance of that play and the offense scoring right after, and said it was huge for the win.

In the fourth, the Salukis were able to go up 24-7 after a scoreless third quarter and on a pass where Baker connected with senior wide receiver Landon Lenoir for a touchdown.

After the game, Baker said it’s huge having playmakers like Avante Cox and Lenoir.

An interception by senior safety Roderick Campbell set up yet another Saluki touchdown and a three-yard Williams Jr. touchdown run put the Salukis up 31-7 putting the Bison in an insurmountable hole.

Late in the game the Salukis added another touchdown, giving themselves the 38-7 advantage, but the Bison would score for their second and final time with 2:16 left in the fourth quarter.

After the game, Hill spoke on the huge win and said the team should be excited but needs to prepare for next week.

“Really, in the locker room after the game, I told them this is a week 2 win; we’re 1-1 in the Missouri Valley so [we’re] never taking winning for granted,” Hill said.

The Salukis will look to carry over the momentum from this huge win next week as they faceoff against Youngstown State in Ohio. Kickoff is at 11 a.m.