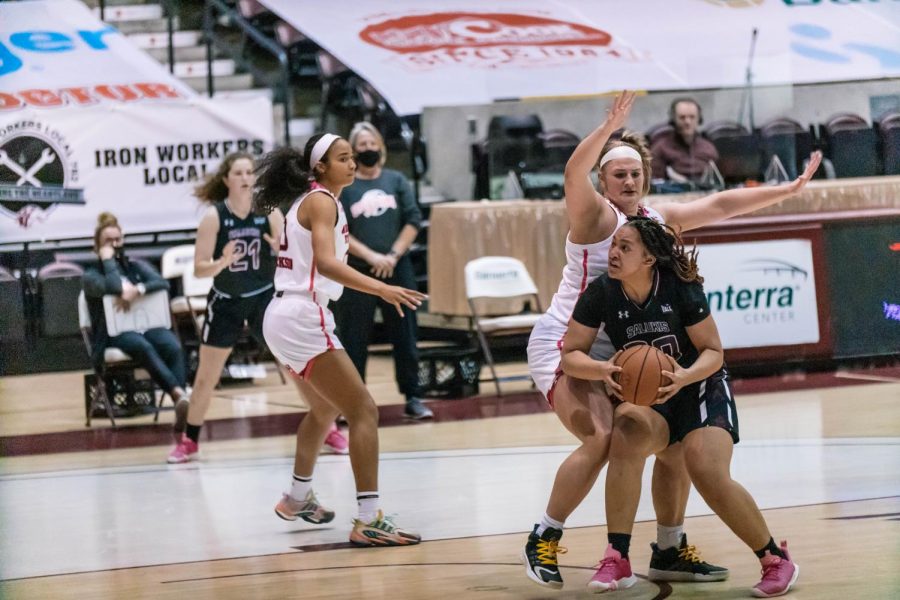 “Gabby and Makenzie did everything they could. I thought we had some really good looks but shots just didn’t go down. I’m proud of our effort, but disappointed in the loss,” head coach Cindy Stein said.

Missouri State took the lead early in the first quarter, 8-4, after two three-point baskets from senior guard Brice Calip and a layup from Franklin.

“They got some open threes because of our lack of defensive assignment. We had some missed ques on defense,” Stein said.

The Bears expanded their lead, 16-6, after two free throws from senior forward Abby Hipp and a three-pointer from Calip.

Southern fought to catch up to the Bears with a layup from senior forward Rachel Pudlowski, but Missouri State remained in the lead, 17-10.

The Salukis started the second quarter with a layup from Walker, decreasing the Bears’ lead to five.

Missouri State continued to lengthen the lead with a layup by Franklin and a three-pointer by Calip, making the score 22-12.

Scoring went back-and-forth between both teams halfway through the second quarter, but Missouri State stayed ahead 24-19.

A 10-point run by the Bears brought the lead back up to 15 points, which was the largest lead of the night, which gave Missouri State the lead at halftime, 36-21.

“I felt like in the second half we settled down and understood what we needed to do a little bit better,” Stein said.

Missouri State continued lengthening their lead in the third quarter with layups from Hipp and Franklin, making the score 40-24.

The Salukis fought to decrease the lead with two baskets from senior guard Makenzie Silvey, but a three-point basket from the Bears’ senior guard Elle Ruffridge increased Missouri State’s lead to 17 points.

Layups from Silvey and Pudlowski and three-point basket from junior guard Caitlin Link and Silvey brought the Bears’ lead down to 12 points at the end of the third quarter.

“I felt like we did a lot of good things to put ourselves in a position to win, we just could not knock down that 10-point, 12-point lead that they had,” Stein said.

Missouri State began the last quarter with two free throws from Franklin and a layup from Hipp, making the score 52-37.

Both teams scored back-and-forth in the middle of the fourth quarter with SIU going on a 9-5 run, bringing the score to 57-45.

Two free throws from Wilson and a basket from senior forward Abigayle Jackson helped Missouri State keep their lead near the end of the game.

Despite scoring from the Salukis at the end of the fourth quarter, the Bears secured the 12-point victory, 67-55.

The Salukis will take the court again on Feb. 27, when they take on Valparaiso at the Banterra Center at 4 p.m.