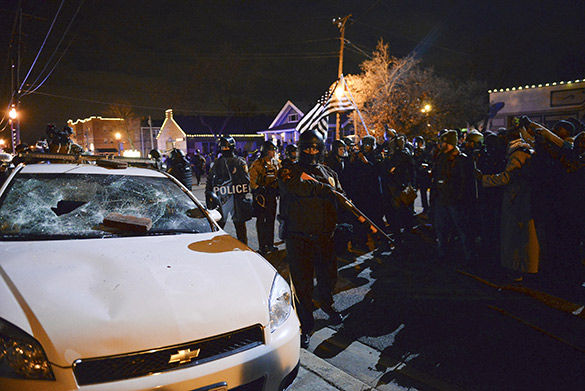 Angela Aguayo grew up in Los Angeles, the child of a white mother and a Mexican immigrant father who, Aguayo said, taught her early on that the history she would hear in schools and sanctioned history books was not the “only history.”

“I kind of grew up with this perspective that the history that gets told is not all the complete story,” Aguayo said. “There’s important, critical, essential perspectives that need to be recovered from history.”

Aguayo is now an Associate Professor of Media and Cinema Studies at the University of Illinois at Urbana-Champaign and recently published a book, Documentary Resistance: Social Change and Participatory Media.

Before moving on to the state’s flagship university, Aguayo spent 12 years in Carbondale making documentaries and working as an Associate Professor of Cinema and Digital Culture at Southern Illinois University.

Aguayo said one of her first experiences at SIU was during faculty orientation when the school was putting up a picture of the first graduating class, which had an African American person, to promote its history of diversity.

“That didn’t totally square with my understanding of history,” Aguayo said.

She grew up in the aftermath of the Rodney King riot, and knew issues like diversity and inclusion were more complicated than they might at first seem.

The moment at faculty training led her down a path to find out how racial and civil rights struggles manifest differently in rural environments removed from the urban landscape people often see depicted as more confrontational or violent.

On the path, Aguayo uncovered stories of segregated cemetery plots, a segregated cafe on SIU campus, the student activism of comedian Dick Gregory, Carbondale’s history of redlining, the rail station that served as a connection point to segregate railroad cars and Black parents challenging school segregation.

Her most prominent work from that time was, arguably, the documentary 778 Bullets, which detailed the coordinated police shoot-up of a Black Panther Party chapter office in Carbondale.

Before she set out to make the documentary, Aguayo said she’d only heard of the incident in whispers.

“I could not find grounding in it anywhere,” Aguayo said. “For whatever reason, the microfiche in the library for that month was gone and no one was willing to talk about it. There was no one that had written about it.”

Eventually, a grad student who had grown up in the area offered to help by pulling up records from the courthouse.

“She came back with a giant box full of all of the depositions, the court cases, the media files, everything,” Aguayo said.

What was most important to Aguayo, however, wasn’t the box full of documents, the official story, but the interviews with community members that had been left out and forgotten for decades.

“What is so like in everyone’s craw 30 or 40 years later is that no one in the community makes it into those [official] stories,” Aguayo said.  “No one’s quoted. No one talked to any of the moms or other families who, bullets went careening through their homes in the wee hours of the morning, who were on the other end of the police.”

Presenting that reflective narrative is what Aguayo sees as a major part of the power of documentary storytelling.

“I choose documentary work because I’m not interested in reifying the official story of history,” Aguayo said.  “I know within the journalism framework, there’s these rich, amazing investigative traditions that I’m all about, right, but I think that those are less so because:  A) it takes a lot of long time for professionals to get the freedom to do that kind of critical reporting, and B) the news cycle moves so damn fast, there is just a problem with being able to take some time with something.”

The disposition toward capturing stories people can learn from in the future is something Aguayo said she values from historic recording projects from people like Booker T. Washington, Lester Balog and Barbara Kopple.

“Barbara Kopple goes to coal miners in the 70’s in Appalachia, and she’s shot at by the police with her crew,” Aguayo said.  “They’re the people who kind of realize that these images are essential and threatening.”

Despite cutbacks to funding of community produced documentaries, Aguayo said she sees a resurgence of interest among young people in documenting life and watching things created by their peers who are more interested in YouTube and TikTok than traditional television and movies.

The kind of ingenuity and resilience among young people is already on display, Aguayo said, in in-the-thick-of-it live streams that became a primary source of news for many people during uprisings in support of the Black Lives Matter movement.

One example she likes is a scene in the documentary Whose Streets, about the Ferguson, Mo. uprising in 2014, in which a professional camera crew is scared away by gunfire and chaos so fast they leave their equipment while local internet streamers stick around to keep their cameras rolling.

“That was like such a fucking poignant metaphor for the situation,” Aguayo said.  “The folks on the ground who are committed far beyond professional commitment […] they’re going to get the more embedded footage that is of interest to people.”

Staff reporter Jason Flynn can be reached at jflynn@dailyegyptian.com or on Twitter at @dejasonflynn.