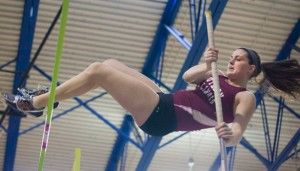 The men’s and women’s Saluki track and field teams breezed through the weekend’s competition as the men and women won a combined 15 events in front of their home crowd Friday and Saturday at the SIU Invitational.

The invitational also saw a handful of personal bests, which included sophomore Krista Menghini’s win in the 3,000 meter race. Menghini finished at 10.13.59, which is more than 13 seconds better than her previous best.

Menghini said she wasn’t nervous before the race, which was different than normal.

“Usually I’m pretty nervous before my races, and I just thought that was kind of weird,” Menghini said.

Senior Lucas Cherry overcame multiple injuries to win his first career mile run at 4:20.03. Sophomore Juan Carrera and juniors Nick Schrader and Brian Dixon all notched personal bests and finished in the top 10. This was Cherry’s second meet of the season after returning from rehab for an injured hip and shins as well as stress fractures from the cross-country season.

Cherry said he is happy to get back on the track after such extensive rehab.

“It’s my senior year, so it’s my last time to race here indoor,” he said. “I was happy to get the win, but I would have liked to be a little faster.”

Senior Kim Fortney grabbed the women’s weight-throw title with 20.04 meter final toss. Sophomore Sophia Lozano took second in the women’s weight throw with a final heave of 19.44 meters. Fortney also won the women’s shot put with a throw of 16.25 meters, which was within two inches of her personal best.

Sophomore DeAnna Price rounded out the top five with her fourth-place 18.64 meter toss.

Freshman Josh Freeman won for the second consecutive week in the men’s shot put final with his 16.98 meter toss, which measures to more than 52 feet.

Sauer’s throw propelled him to third in the nation among active NCAA division one throwers; he was previously ranked eighth at 20.35 meters. Sauer also moved ranks in the SIU record book, as his performance moved him from sixth to fourth in SIU history for the men’s weight throw.

SIU throws coach John Smith said he is excited about how well the team has performed at this year’s meets.

“You’ve got competition within your own team, which always creates better throwing,” he said. “I’ve got three young girls who are all throwing far, and you never know who is going to be on. I wanted to see what they could do and they preformed well.”

Coach Connie Price-Smith said she was happy with SIU’s performance, and predicted a strong finish in future conference meets if the team can perform like the two-day weekend invitational.

“Having a scored meet helps the athletes focus on contributing to the team’s total points,” Price-Smith said. “That’s the attitude that we will need going into the conference meet.”

The Salukis will travel to Allendale, Mich., on Friday and Saturday for the GVSU Big Meet at Grand Valley State University.