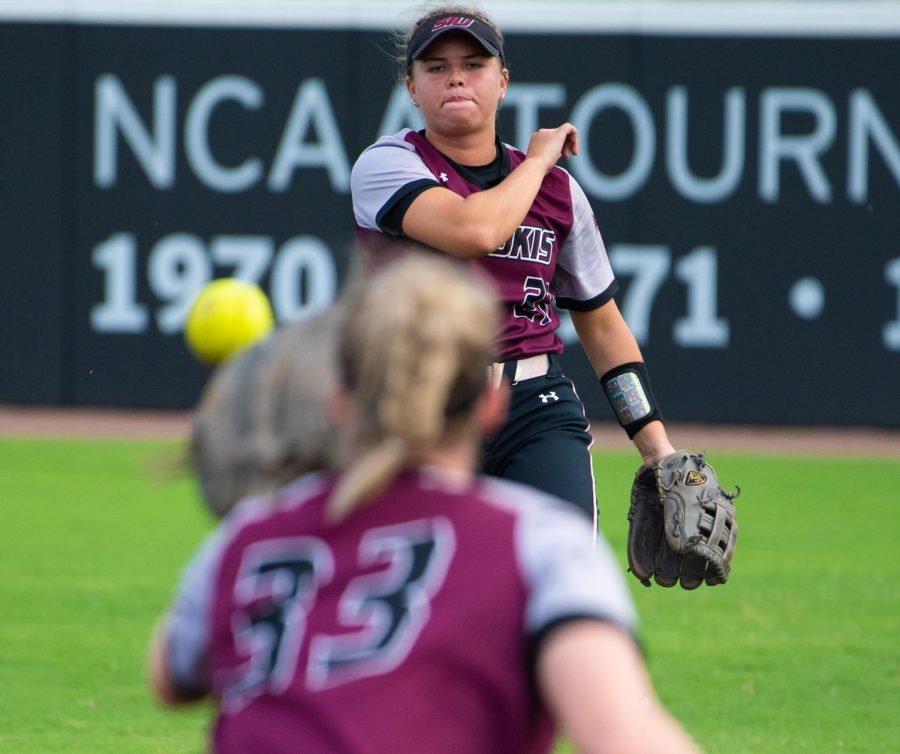 Saluki Infielder Maddy Vermejan passes the ball on Saturday, Sept. 21, 2019 during the Salukis' 4-0 win against the Murray State Racers at Charlotte West Stadium.

Sophomore pitcher Sarah Harness pitched five and two-thirds innings for the Salukis in their opener of the tournament against Mississippi State.

In the win, the Salukis jumped out to a four-run lead by the third inning, but the Bulldogs managed to push across five runs in the sixth inning to take the lead.

SIU answered in their half of the seventh inning. Graduate student infielder Maddy Vermejan drew a walk on six pitches and advanced to second on a ground out.

A single by senior infielder Jenny Jansen brought Vermejan home to knot the score at five heading into Mississippi State’s half of the seventh inning.

Freshman pitcher Madi Eberle came in to relieve Harness in the sixth and in the seventh, she held the Bulldogs at bay, facing only three batters and striking one out.

The game then went into extra innings, and junior infielder Ashley Wood was placed on second as part of the extra innings rules, and she came around to score off an error by the Mississippi State pitcher.

Eberle came in the eighth and finished the Bulldogs off with eight pitches, earning the win for her, throwing two and two thirds innings while allowing only one run.

In the nightcap of the day Southern faced off against Mississippi Valley State, winning 5-0 over the Devilettes.

With two outs on the board junior infielder Sydney Sikes led off with a double, freshman infielder Elisabeth Huckleberry reached on an error which moved Sikes to third base.

Freshman infielder Jenna Christeson brought both of them home to give the Salukis a two to nothing lead over Mississippi Valley State.

Wood would help add on to the SIU lead with a triple to lead off the fourth inning, Wood then came home following a single by sophomore outfielder Tori Schullian.

SIU would add two more runs in the fifth when Vermejan reached third base on an error by the Devilettes right fielder.

Massa was pinch hitting for freshman outfielder Bailey Caylor who came in and stole second, Caylor was then brought home on a double to right field from Wood.

Sophomore pitcher Carlee Jo Clark did not allow a runner to reach base until the fourth inning, giving up five hits while pitching all seven innings.

In the third and final game of the tournament the Salukis defeated Stephen F. Austin 5-4.

Eberle started the third game for SIU, and in the first inning she gave up a double and a single to the Ladyjacks to give them a 1-0 lead in their half of the first inning.

Southern answered back with two runs of their own in their half of the first inning.

Caylor doubled to left center followed by a single by Jansen, Wood then walked to load the bases.

Three more walks coming from Schullian Massa and Huckleberry , allowed both  Caylor Jansen and Wood to score giving SIU the 3-1 lead after one inning.

Schullian singled in the third inning and was pinch run for by sophomore outfielder Aubree DePron.

DePron stole second and third base, and Sikes was hit by a pitch and stole second. DePron scored on the throw to second to give Southern a three-run advantage.

The Salukis would not score again until the sixth inning senior outfielder Maris Boelens doubled down the left field line then scored on a single from Vermejan to go up 5-1.

After Eberle pitched only the first inning Clark replaced her allowing only three hits across five innings and no runs.

Harness came on to relieve Clark in the seventh, and with two runners on with walks SF Austin scored with a double to left field pulling them within three.

A single up the middle then scored two more runners for the Ladyjacks to pull them within one, but Harness was able to strike out the batter to end the inning and win the game for SIU.

The Salukis will be back in action on February 26 facing off against Austin Peay with first pitch set for 2:30pm  where  they will open the Coach B Classic here in Carbondale.