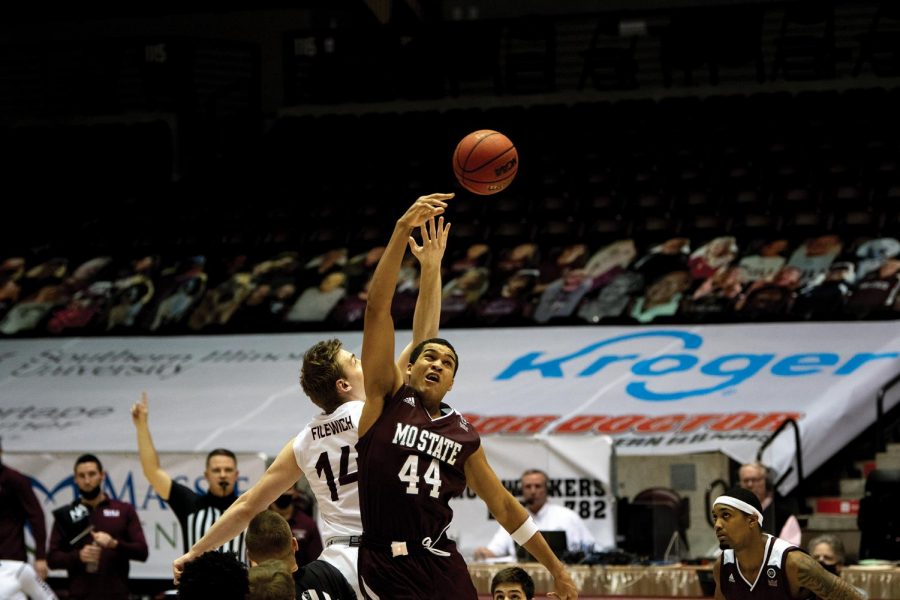 Kyler Filewich (14) battles during the tip-off in the game against Missouri State University on Wednesday, Feb. 17, 2021, in the Banterra Center at SIU. The Salukis lost the game by 15 points with a final score of 53-68.

Prim finished the game with 29 points and 21 rebounds, both career highs for him.

In the first four minutes of the game the Salukis (10-10, 4-10 MVC) struggled to score, while  Prim dunked the ball continuing an 11-0 run by Missouri State.

“Give credit to Missouri State, they played a complete game tonight,” Saluki head coach Bryan Mullins said. “We didn’t get a couple shots to drop for us. They obviously were able to make a couple and get in transition a little bit that first four to five minutes.”

Southern only made one of their 10 shot attempts at the 13 minute mark of the half with a three-pointer from senior forward Anthony D’Avanzo, as the Salukis were down 17.

“We didn’t start off well at all,” sophomore forward Ben Harvey said. “We didn’t follow through with the game plan like we should have.”

“They were just giving driving lanes,” Harvey said. “They do a good job defensively. They play a lot of one on one defense which opens up driving lanes.”

Harvey made a three-pointer to cut the Missouri State lead down to nine, but Prim was able to answer the basket with a layup with four Salukis in his face to give the Bears an 11 point lead.

Southern struggled to shoot the ball in the first half, shooting 28 percent from the field, with the Salukis down 36-22 at halftime.

Harvey lead the way for the Salukis with 10 points at halftime.

Prim led the way for the Bears at halftime with 16 points to go along with 12 rebounds, shooting 70 percent from the field.

After getting injured late in the first half, sophomore guard Lance Jones came out of the locker room with two of his fingers on his left hand taped up to score four points for the Salukis to start the second half. Jones kept the MSU lead at 15 points.

The Salukis shooting struggles from the first half followed them into the 13:43 mark of the second half, where they continued shooting 25 percent from the field.

“We didn’t shoot the ball well tonight,” Mullins said. “I thought we had pretty good looks throughout the night.”

Southern’s sophomore forward Sekou Dembele made both of his free throws off the Prim foul to give the Salukis a 18-point deficit.

“I don’t think our guys quit. I don’t think there was a lack of effort,” Mullins said. “Give Missouri State credit; they played better than us on both sides of the ball.”

The Bears went on a 5-0 run with a layup by Prim and a three-pointer by sophomore guard Ja’Monta Black which gave them their biggest lead of the night at 60-39.

Filewich was able to back down Prim at the basket and was fouled, while Prim limped off of the court at the 2:38 mark with the Bears up 66-46.

The Salukis struggled to rebound the ball well in tonight’s game, losing the rebound battle 43-27.

Jones scored six straight points to end the game, but it was not enough as the Salukis fell 68-53.

“I think the only way to go from here is up,” Harvey said. “We have four more games left in the regular season. We’ve got good matchups coming up we feel confident about.”

Up next for the Salukis will be Valparaiso on Sunday with tip off set in the Banterra Center for 4pm.