University students discuss their experience in the Moderna vaccine trial 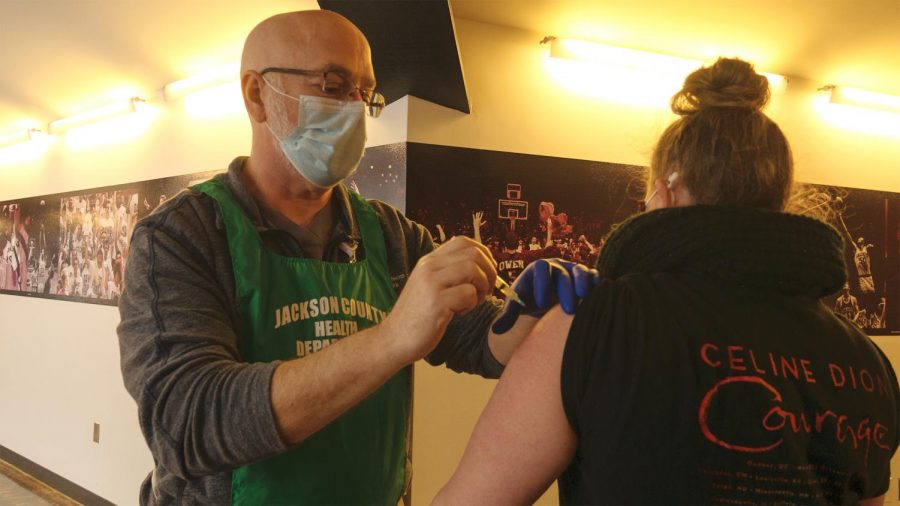 Jackson County Health Department worker, Frank Saunders, administers the Pfizer-Moderna COVID-19 vaccination to Abigail Moberly, a Carbondale local, Thursday, Feb. 11, 2021, in Carbondale, Ill. “They said it’s not bad. They said it doesn’t even feel like you get a shot, ya know? That your arm is sore and that’s about it,” Moberly said.

In human history, no vaccine has been developed, tried, and tested faster than the Pfizer, Moderna and Astrazeneca COVID-19 vaccines.

However, the speed at which the development went led to concern over the safety and effectiveness of the vaccines.

In a poll conducted by the Associated Press’ Center for Public Affairs Research, nearly a third of Americans said they would “definitely or probably” not get the COVID-19 vaccine shots.

But for many, the word of their peers means more than politicians or celebrities.

In the race to develop a vaccine for the coronavirus thousands of individuals in the U.S. and overseas took part in early trials.

Vanderbilt University, in collaboration with the Vaccine Research Center of the National Institute of Allergy and Infectious Diseases (NIAID), recruited 500 participants for Phase 3 of the Moderna trials.

Seth Reasoner, a PhD student at Vanderbilt, took part in the double blind trial receiving the placebo and later the actual vaccine.

“Participating in the trial gave me the ability to talk to my patients and family about the vaccine development process and gave credence to what I was saying,” Reasoner said.

One of the major concerns surrounding the speedy trials were side effects.

“I had minor arm soreness following my vaccinations,” Reasoner said, “Having predictable side effects–soreness, fatigue, aches, even fever–should be reassuring to us because it indicates that the vaccine is working.”

Another participant of the Moderna trial, Grace Morales, a PhD candidate at Vanderbilt, received the actual vaccine during the testing.

“For the second […] I mostly had muscle pain, I was really tired and had a little bit of a headache, but nothing too bad, no fever,” Morales said.

Dr. Mark Denison, director of the Division of Pediatric Infectious Diseases at Vanderbilt, shared his thoughts and research on the COVID-19 vaccine during a webinar in December.

“We have effective antivirals and treatments within six months, and we have vaccines within nine months, this is unbelievable, and yes, we should take them if we can,” Denison said.

The two trial candidates similarly urged individuals to receive the vaccine if and when they are able.

For individuals who are skeptical of the vaccine, Reasoner recommended talking to a physician about worries and concerns as the medical field has been supportive of the vaccine.

“Trust the science and trust the professionals because they too want to get back to normal,” Morales said.