Saluki softball off to best start since 2009 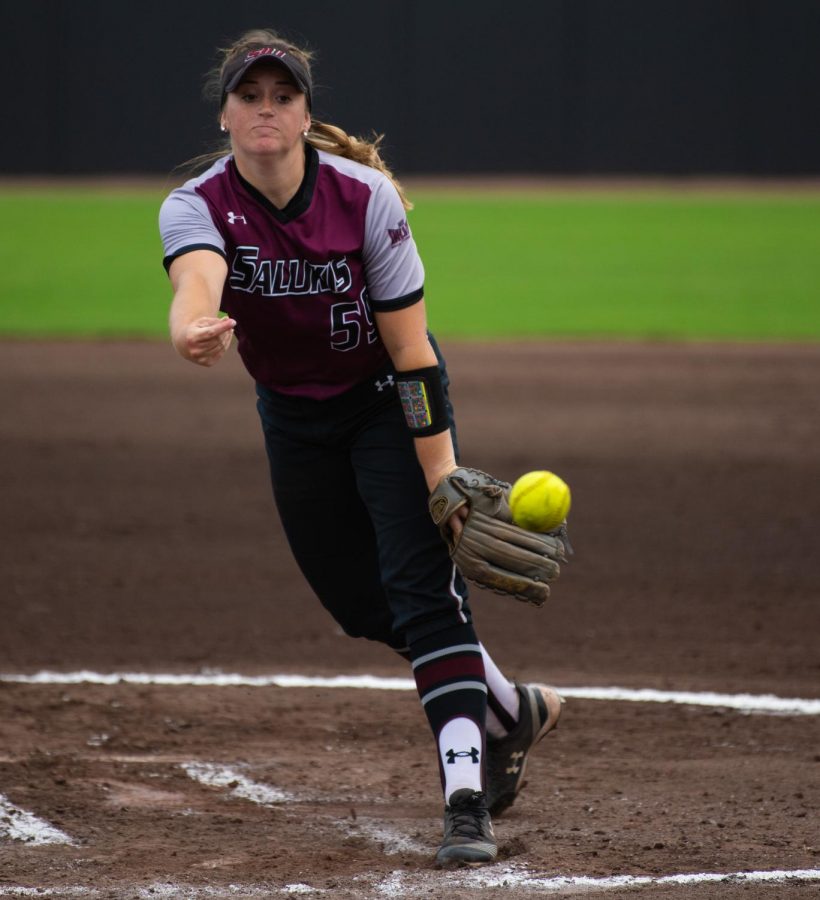 Saluki pitcher Claire Miller pitches the ball on Saturday, Sept. 21, 2019 during the Salukis' 4-0 win against the Murray State Racers at Charlotte West Stadium.

In their opening weekend of play Saluki softball opened their season 3-0, marking the best start to a season since 2009.

SIU opened the weekend up with two wins on Saturday at the Black and Gold Invitational in Hattiesburg, Miss.

In game one against Murray State sophomore pitcher Sarah Harness allowed only three hits and struck out eight batters.

Freshman outfielder Bailey Caylor got the scoring started for the Salukis in game one, after reaching base on an error.

All three runs the Salukis scored in game one on Saturday were scored in the fifth and sixth innings.

Graduate senior infielder Maddy Vermejan was hit by a pitch and then stole second and she advanced home to score when Caylor reached base on an error.

Senior infielder Jenny Jansen then scored Caylor with a double to push the Salukis ahead 2-0 in the fifth inning.

Harness had some issues in the sixth inning after an error. Freshman catcher Taylor Jackson singled scoring senior outfielder Jensen Striegel from third to cut the Southern lead to 2-1.

Senior outfielder Maris Boelens reached base on an error and Vermejan hit a single to bring her in and give SIU the 3-1 lead.

Harness worked around one walk to ground out and fly out the other batters to secure the complete game victory.

The scoring for the Salukis got started in the second inning. Freshman infielder Elisabeth Huckleberry singled into left center to be followed by a single from sophomore catcher Kerrigan Gamm.

SIU would record their second run in the fifth inning. Gamm reached base on a walk and junior infielder Sydney Sikes was hit by a pitch putting runners on first and second base.

North Dakota threatened in the seventh inning with junior infielder Jocelyn Kirk advancing to third on a wild pitch, but freshman pitcher Madi Eberle struck out the last two batters she faced to secure a 2-0 win.

The Salukis closed out the weekend with a 6-0 win over Murray State on Sunday, with sophomore infielder Tori Schullian leading the way with three hits.

In the second inning Sikes singled through the left side of the field, DePron then came in to pinch run for her.

Schullian then doubled into left field scoring DePron to give SIU a 1-0 lead in the second inning.

The Salukis got back on the board in the fifth inning after Vermejan was hit by a pitch, she stole second. Warwick then singled to left field scoring Vermejan to give SIU a 2-0 lead.

Southern added three runs in the fifth inning with Schullian recording another RBI double to make it 3-0, a sacrifice bunt and sacrifice fly scored the other two runs in the inning.

In the top of the seventh inning graduate senior Katelyn Massa was walked and then advanced to second on a wild pitch.

Schullian then singled to center field scoring Massa to make the game 6-0.

Eberle, who earned the save in game two the day before, started game three and finished the game with only three hits allowed walking one batter while striking out five.

The Salukis are scheduled to play again in The Snowman: Alex Wilcox Memorial Tournament hosted by Mississippi State University in Starksville, opening the tournament against Stephen F. Austin University.