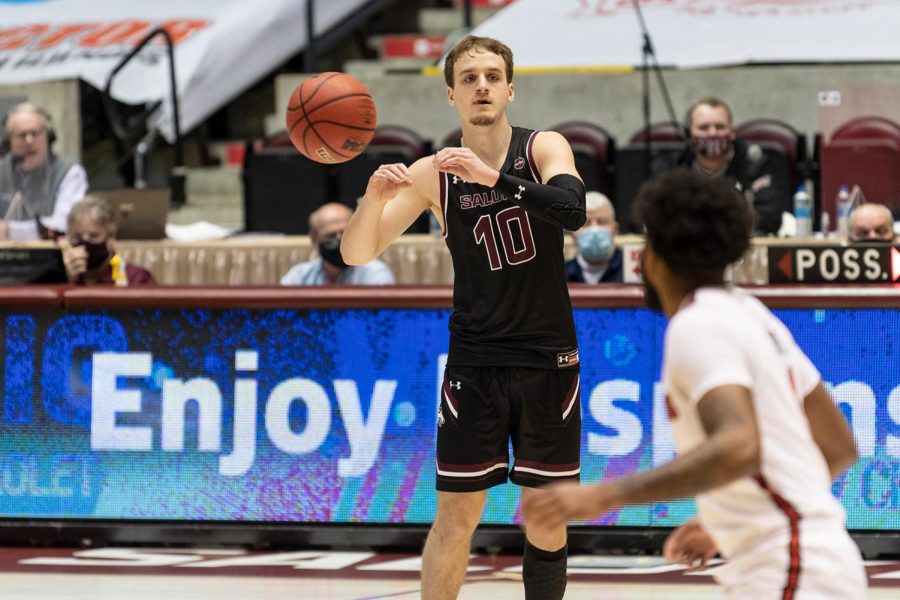 Ben Harvey (10) gives a no-look pass to his teammate staying at the edge of the opponents’ court in a game against the Illinois State University Redbirds on Saturday, Feb. 13, 2021, at the SIU Banterra Center.

The Salukis fell to Illinois State 80-55 as the Redbirds turned 13 turnovers by SIU into 23 points.

SIU (9-9,3-9) knotted the score at four after a layup by sophomore guard Steven Verplancken Jr.

“Making sure our guys are ready to start that first four minutes of the game,” SIU head coach Bryan Mullins said. “Illinois State came out with more energy, they executed better on both sides of the ball.”

After a layup by sophomore forward Sekou Dembele, the Salukis cut the Illinois State lead down to three.

The Redbirds then went on a 8-0 run to push their lead out to 24-13 with five points leading the way for Illinois State from freshman forward Harouna Sissoko.

Southern pulled back within eight after a three-pointer by freshman guard Dalton Banks off of an assist from sophomore guard Ben Harvey at 2:39 mark of the first half.

Verplancken fouled Boyd with one second left in the first half, and Boyd made both free throws to give Illinois State a 40-26 lead heading into halftime.

SIU turned the ball over eight times in the first half which the Redbirds turned into 13 points. Southern scored seven points nine minutes into the second half while Illinois State opened up a 21 point lead.

The Redbirds scored three consecutive three-pointers without a score from the Salukis which pushed Illinois State out to a 64-35 lead at the 9:35 mark of the second half.

Horne was called for a technical in which Harvey shot and made both free throws for Southern, then on the pass in, he scored a three-pointer to pull the Salukis within 32.

SIU went on a 6-0 run after forcing three missed field goals on Illinois State to make the score 76-51 with 3:26 left in the first half.

Up 80-55 with 24 seconds left the Redbirds elected to hold the ball to end the game.

The Redbirds forced 13 turnovers on the Salukis which they turned into 23 points. After the game Mullins said the Southern will focus on having a good walkthrough and executing better in the next game.

“We gotta have a great walkthrough tomorrow,” Mullins said. “Make sure mentally, emotionally, physically our guys are ready to go.”

Southern will be back in action tomorrow at 3 p. m. against the Redbirds in Carbondale.