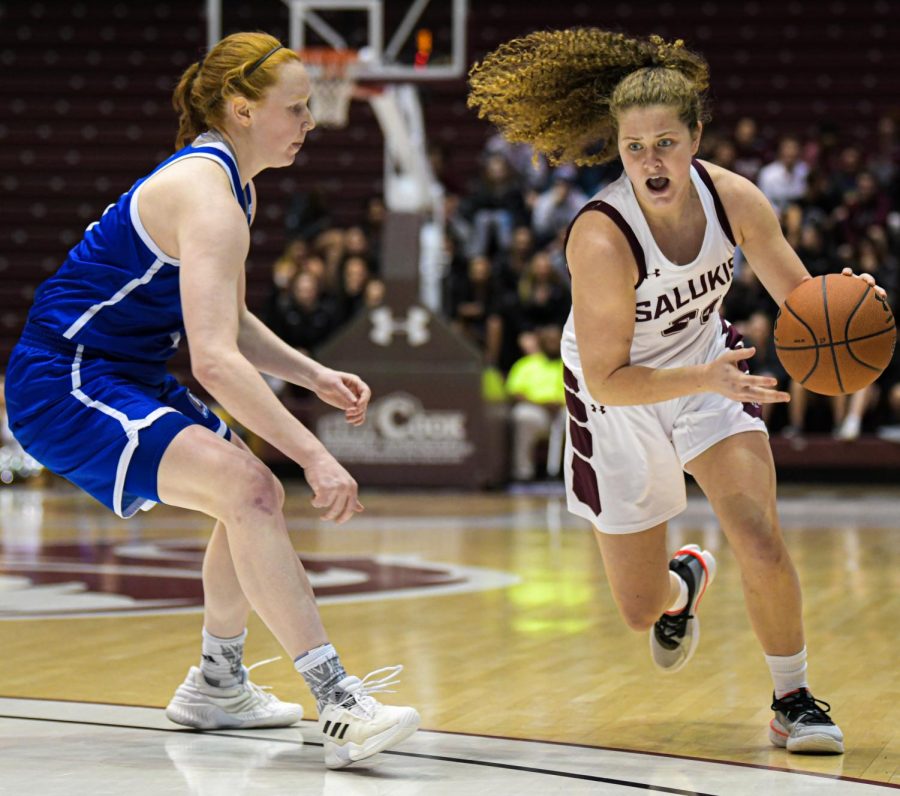 SIU guard Payton McCallister works her way inside against a Bulldog defender during 73-65 loss to Drake on Sunday, Jan. 12, 2020 in the Banterra Center.

Southern was on track to win their first road game until Drake fought back in the last minutes of the fourth quarter with clutch points from Berge.

Senior guard Mackenzie Silvey led scoring for the Salukis with 18 points and Berge led for the Bulldogs with 14.

The Salukis started the first quarter with two 3-pointers from junior guard  Payton McCallister and Silvey giving them a 6-2 lead.

Junior guard Caitlin Link quickly followed up with another 3-pointer for Southern, extending their lead.

Drake was able to gain the lead, 10-9, with an eight-point run from scoring by redshirt senior forward Mya Mertz, graduate student forward Monica Burich and Berg.

Southern regained a three-point lead with a layup from senior forward Rachel Pudlowski and a 3-pointer from freshman guard Quierra Love.

The Bulldogs constant scoring from redshirt freshman guard Taylor McAulay and junior forward Allie Wooldridge was not enough to regain the lead at the end of the first, as the Salukis led 25-18.

SIU continued lengthening their lead in the second quarter with a layup from redshirt senior forward Gabby Walker.

The defensive efforts from both sides kept each team scoreless for several minutes halfway through the second quarter.

Silvey ended the scoreless streak for the Salukis with a 3-pointer increasing the lead to 11 points, 31-20.

Scoring went back-and-forth between the Salukis and the Bulldogs near the end of the half, but SIU managed to maintain the lead 39-32.

SIU ended the quarter with an eight-point lead after a 3-pointer from Silvey, making the score 43-35.

SIU quickly started off the third quarter with a 3-pointer from Silvey and a basket from Adrianna Katcher.

Despite the offensive effort, neither team was able to knock down a shot midway through the third quarter.

Two free throws from Berg and one free throw from sophomore guard Sarah Beth Gueldner cut the Salukis lead down to seven points, bringing the score to 48-41.

Southern brought the lead back up to 12 points after a 3-pointer from McCallister and layup from Walker.

Drake fought to shorten SIUs lead, but the constant scoring from Walker kept the Salukis ahead, 57-51, at the end of the third quarter.

The Bulldogs cut the Salukis lead down to four points in the beginning of the fourth quarter with layups from McAulay and Negaard, making the score 59-55.

Drake tied the game, 61-61, after a 3-pointer from senior guard Maddie Monahan.

The score went back-and-forth several times near the end of the fourth quarter, until Drake gained a three-point lead, 67-64, after a layup from Berg.

The Salukis were able to gain a one point lead from a basket by Silvey with just under two minutes left to play.

The score tied once again, 70-70, with a free throw from McAulay with 40 seconds left on the clock.

A layup and two free throws from Berg in the last 10 seconds of the game secured the close victory for Drake, 74-70.

The Salukis will face the Bulldogs again on Feb. 12 at 5 p.m. at the Knapp Center.