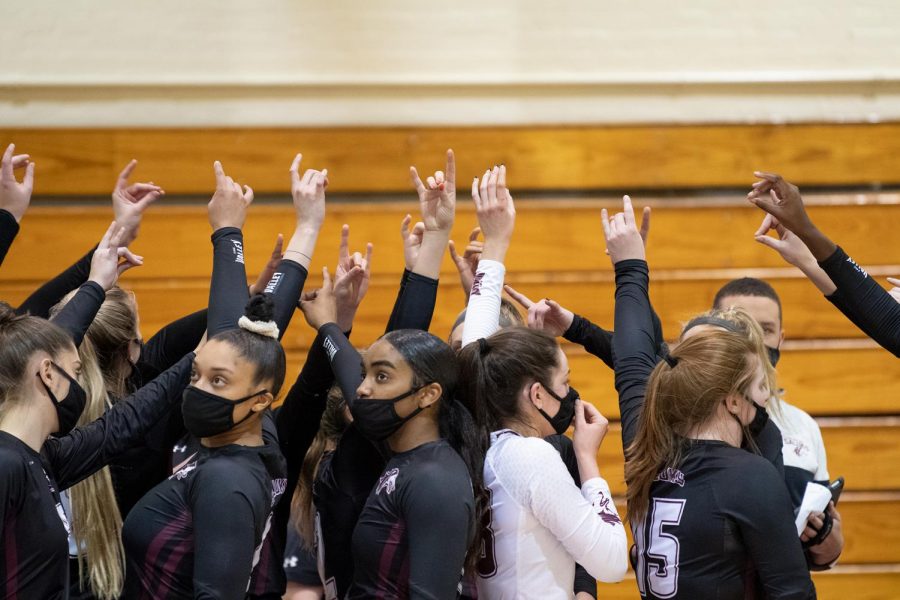 SIUC players cheer up in the break of the last set after getting feedback from the head coach in the game against Loyola University on Monday, Feb. 8, 2021, in Davies Gym at SIU.

The Salukis entered the third set against Loyola University Chicago down 2-0 and needed a momentum changer.

As redshirt senior outside hitter Savannah Sheridan was able to pop the ball up on the end line and freshman defensive specialist Ryan Rednour got it just over as it grazed off the net and fell to the floor, SIU was within one point with the Ramblers at 15-14.

Their intense moment of energy wasn’t enough to outlast Loyola’s strength, however, as the Ramblers (4-1,3-1 MVC) defeated SIU (1-4,0-3 MVC) in three sets for the second straight day.

The first set started very well for the Salukis as they took a 7-1 lead behind two kills by freshman setter Peyton Plant.

The Ramblers responded with six-straight points to tie the set up at seven.

The rest of the first set was back and forth, but a Salukis error got the Ramblers a 25-22 win in the first set.

The Salukis weren’t able to keep it close in the second set and the Ramblers got a 25-16 set with the final point coming off a Saluki error.

SIU got out to a 4-1 lead in the third set but the Ramblers once again responded, and found themselves up 9-7.

Southern retook the lead at 12-11 on a service error by Loyola, but that would be the Salukis last lead of the match as the Ramblers got on another run.

Freshman defensive specialist Kat Warpinski closed out the third set 25-16 as well as the match with an ace.

The Salukis next match is Feb.14 at 3 p.m. on the road against Valparaiso.