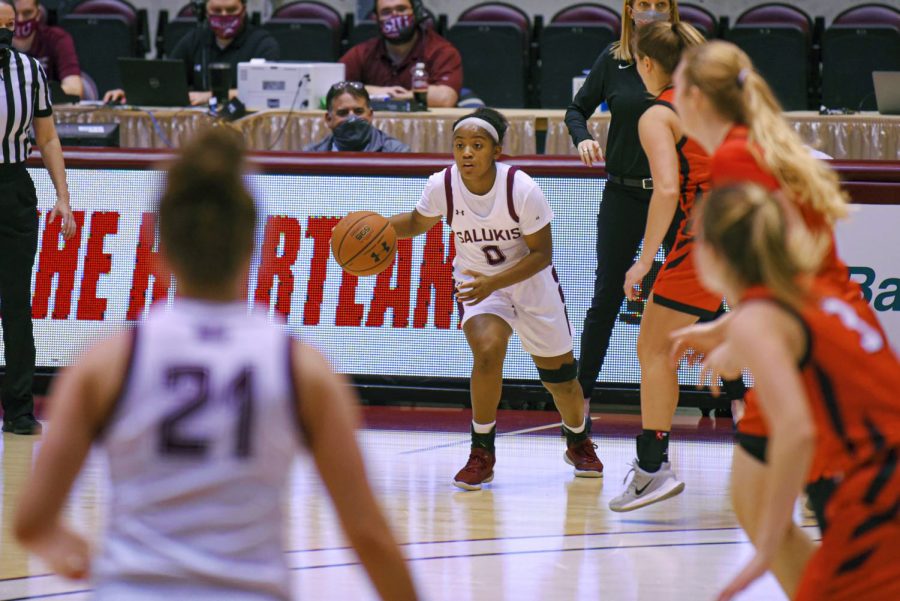 Freshman Quierra Love sets up a play during the game vs. Illinois State on Friday, Feb. 5, 2021 in the Banterra Center at SIU. Salukis' went on to lose 50-57 to the Redbirds.

The Saluki women’s basketball program entered the third quarter of tonight’s matchup against the Illinois State Redbirds with a five-point lead, and immediately extended the lead to eight on a three-pointer by senior guard Makenzie Silvey to get the lead to 37-29.

After that, the Salukis only added four points over the next nine minutes as the Redbirds were able to go on a run and take the lead behind a strong quarter from Redmond, who added nine points in the quarter.

Head coach Cindy Stein spoke about the scoring drought in the third quarter and said foul trouble was a big part of it.

In the fourth quarter, the Redbirds extended the lead to 47-43 before a layup from senior forward Gabby Walker and a three-pointer from junior guard Caitlin Link to briefly give the Salukis a 48-47 lead.

The Salukis’ leading scorer in the game was senior guard Makenzie Silvey with 11; she was followed by junior guard Peyton Mccallister and senior forward Rachel Pudlowski, who both added nine points apiece.

Senior forward Abby Brockmeyer, the Salukis’ leading scorer this season, missed the game today. Stein spoke on her injury and said she was injured on Wednesday.

“Abby sprained her ankle Wednesday in practice, was not able to practice and actually we kept her out of practice on Thursday because she wasn’t moving real well and we didn’t want to force anything. We tried to see how she would do in shoot around today and she wasn’t able to be full go,” Stein said.

The Redbirds were led in scoring by senior guard Juliunn Redmond, who had a game-high 22 points. Stein discussed Redmond and said they knew she was a talented player before the game.

“Redmond is a very talented young lady, a very good player and we knew that coming in. But you can’t lose sight of number three [Mary Crompton], and you know they’ve got some other weapons that come in and do a great job for them,” Stein said.

SIU had a strong start to the game, as they led for most of the first quarter behind strong quarters by Mccallister and Pudlowski. They both scored multiple baskets as the Salukis went to the second with a 23-21 lead.

In the second quarter, the Salukis’ defense came through, holding the Redbirds to just eight points. The Salukis also had scoring from five different players in the quarter to extend their lead to 32-27 at halftime.

The third quarter started well for the Salukis as they immediately extended the lead to eight on a three pointer by Silvey to get the lead to 37-29.

After that, the Salukis only added four points over the next nine minutes as the Redbirds were able to go on a run and take the lead behind a strong quarter from Redmond, who added nine points in the quarter.

After that, Illinois State got the lead up to 53-50 inside the last twenty seconds and the Salukis had a three-point attempt that was off the mark. The Redbirds then added four late free throws to get to the final score of 57-50.

The Salukis next game is tomorrow, Saturday, Feb. 6 at 4 p.m. as they will once again look to pick up a win against the Redbirds.