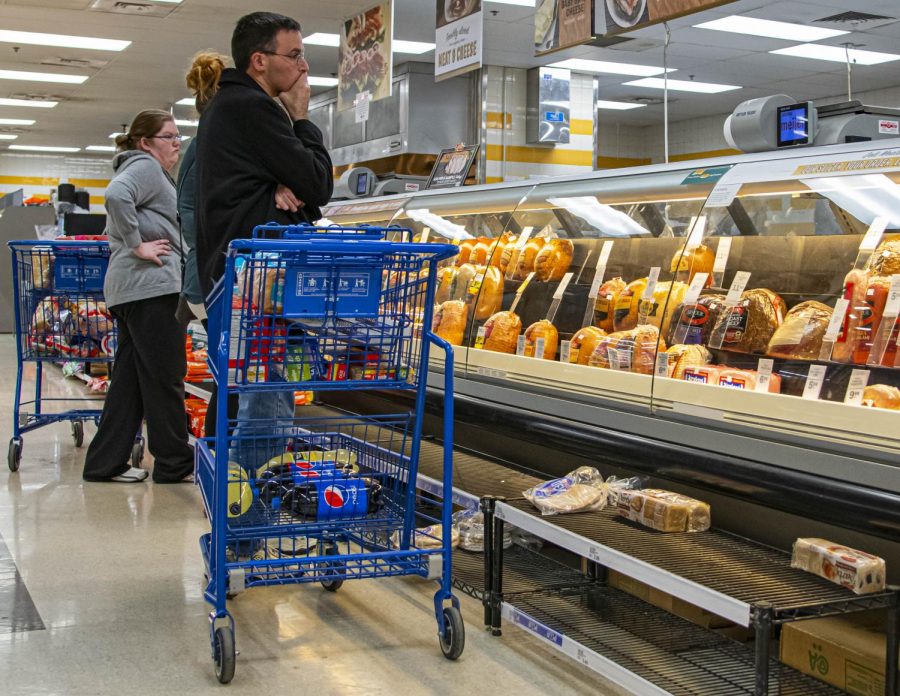 People wait in lines to buy food and supplies as the hysteria surrounding COVID-19 spreads on Sunday, Mar. 15, 2020 at Meijer in Springfield, IL.

Food deserts are geographic areas that have limited access to affordable and fresh produce. Carbondale is one of the cities in southern Illinois that lacks various resources as a result of lower income and poverty.

Dr. Jessica Crowe, an associate professor of sociology at SIU, said southern Illinois would be considered a food desert since it’s an area of lower income and this area has less access to resources.

There aren’t as many grocery stores in the area to purchase fresh produce at. There are more gas stations and convenience stores where people have limited options, and this can impact their health. The west side of Carbondale is more than a half mile from the nearest grocery store, so the city is considered a food desert.

Jackson County is one of the counties in Illinois that’s considered to be a food desert. This is an area of low income and low supermarket access. For vehicle availability and supermarket access, 76 out of 1,243 households, or 6.1%, don’t have vehicles, or are located within one-half mile of a supermarket. And for the group quarters population, there’s 0 of 3,115 total people, or 0%, that reside in group quarters, according to the USDA Food Access Research Atlas.

Nancy Maxwell, the director of Carbondale United, said there is limited access to affordable food in Southern Illinois, and it’s impacting counties outside of Jackson County.

“I wouldn’t say so much as Carbondale, as I would the counties and cities further down from Carbondale. More so like Cairo and Miles, Pulaski County, and Alexander County, I believe faces that problem greater than Carbondale or Marion,” Maxwell said.

“From the point when I moved down here to now, I believe right now if I’m correct, there’s one grocery store in Niles and that’s it. It used to be a couple grocery stories in Cairo, the Piggly Wiggly and Wonder Mart. And then because Cairo borders closely to Missouri, you could go over to Walmart. But all those things are gone now,” Maxwell said.

Jennifer Paulson, the director of the Carbondale Community Farmers Market, said there is a limited access to fresh produce in Carbondale and in Jackson County.

“There absolutely is limited access to healthy fresh food. Carbondale is in Jackson County, which is one of the poorest counties in our state. It has some of the highest levels of poverty, then when you travel outside of Carbondale, you’re traveling to rural places that also don’t have access to fresh healthy food,” Paulson said.

Southern Illinois is a rural area of high agriculture and they aren’t producing a vast amount of food for direct consumption, which could otherwise sustain the community. Members of the community often have to travel a greater distance to obtain fresher produce.

“It’s kind of strange that we can live in a highly agricultural area, and many of these rural counties outside of Carbondale have farms everywhere, but they aren’t producing foods that we can eat. And so people end up having to drive quite a distance just to get to a grocery store, and then in those cases that food is often not the freshest,” Paulson said. “So even if they can get to it, they’re not necessarily getting food that is fresh and full of life-giving nutrients that are needed for human health.”

The Farmers Market gives back to the community by providing a resourceful SNAP program, which contributes to people who need additional assistance with purchasing fresh produce.

“It is a concern that low-income populations in our area don’t have good access to healthy fresh foods, so one of the things we’ve done is implement SNAP at our farmers market, and also a double value coupon program called Link Match,” Paulson said. “The way it works is that a customer who receives SNAP in Illinois through the link card, brings their link card to the market, they can swipe their card for any amount they’d like to spend and then we will match them dollar-for-dollar with link match coupons. And those coupons are good for fruits and vegetables up to $25 a day.”