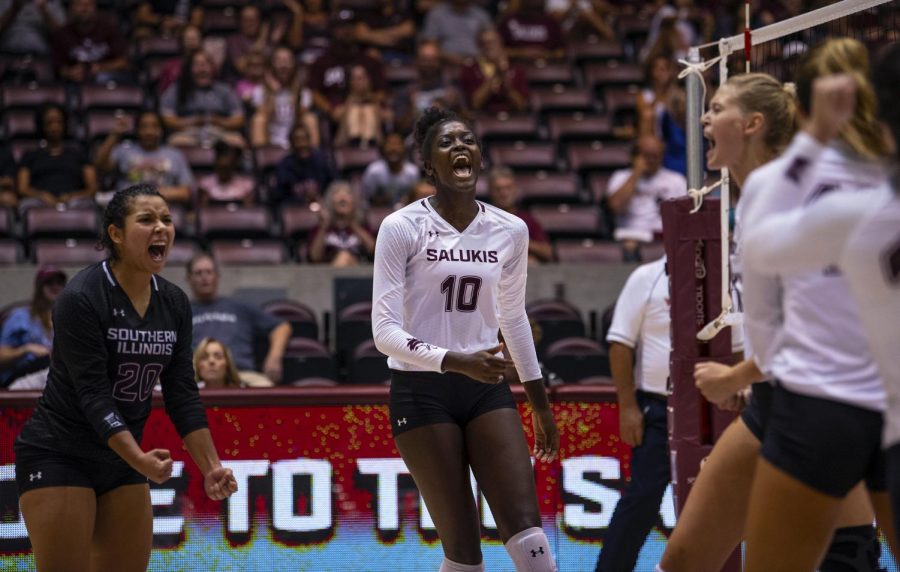 Laura Rojas, of Orlando, Fla., and Savannah Sheridan, of Chicago, celebrate after a scored point on Saturday, Sept. 14, 2019, during SIU's 3-2 win against Alabama State.

Coming off their split against Memphis on Jan. 22 and 23, Southern looked to open conference play with a win against Missouri State.

Southern came as close as 20-18 but a 5-0 run led by two kills from sophomore middle blocker Azyah Green closed the first set for Missouri State as a win 25-18.

SIU opened the second set with a 3-1 lead with two kills, with one of them coming from senior Savannah Sheridan.

Missouri State then went on a 7-1 run with two attack errors to go along with one kill from Cink and Green to push out to a 8-4 lead.

After being down by four, the Salukis came out of a timeout with four straight points including two kills from Sheridan to knot the set at 15-15.

Sheridan finished the second set off for SIU with her fifth kill of the set leading to a 25-23 win.

A service error by the Bears and an ace by freshman outside hitter Alex Washington got Southern up 2-0 early in the third set.

SIU pushed out to a 11-6 lead with a 7-5 run with Sheridan leading the Salukis with two kills.

The Salukis pushed out to a 18-10 lead with a 6-4 run led with two kills by senior opposite hitter Emma Baalman.

A kill by freshman Tatum Tornatta and Sheridan closed the set scoring for Southern to clinch the third set 25-17.

Two kills from Flynn, and three attack errors on Southern helped the Bears push out to an 8-2 lead early in the fourth set.

After coming within three after a kill by junior outside hitter Hannah Becker, Missouri State went on 10-1 run, with four attack errors to give them a 16-6 advantage.

Southern came within seven points, but a kill by Green for the Bears and an attack error by the Salukis closed out a 25-15 fourth set win for Missouri State.

The Salukis will play the Bears again on Tuesday in Springfield, Mo,. with first serve set for 3 p.m.