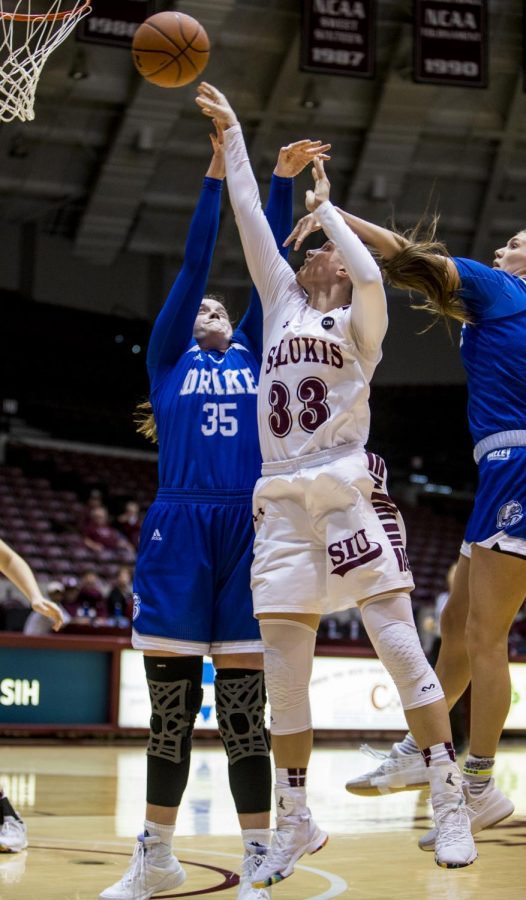 Sopohmore forward Rachel Pudlowski goes up for a basket on Friday, March 1, 2019, during the Salukis' 64-71 loss to the Drake Bulldogs in the SIU Arena.

Missouri State, the 2019 MVC tournament champs and the 2020 regular season MVC champ, was led in scoring by senior center Emily Gartner with 15 points. She also made her first three-pointer of the season. Junior forward Jasmine Franklin followed with 13 points as well.

The Salukis were led by senior forward Abby Brockmeyer who got a double-double with 13 points and 11 rebounds.

Both teams struggled shooting in the game with Missouri State shooting 38.5 percent and the Salukis at 26 percent. The teams also combined for just seven for 37 on three-point attempts.

The game started strong for the Salukis getting a 9-4 lead halfway through the first quarter.

But the Lady Bears ended the first quarter strong and took a 19-12 lead into the second.

Missouri State took an 11 point lead with just under seven minutes left in the second quarter before there was a 3 minute scoring drought by both teams before a three pointer for the Lady Bears by junior guard Sydney Wilson to extend the lead to 31-17.

Missouri State took a 35-22 lead into the half.

The Salukis weren’t really able to cut much from the deficit en route to the 61-44 final.

The Salukis will look to get back on the right track on Saturday Jan. 30 as they take on the Loyola Chicago Ramblers at 1 p.m in Chicago.