The end of an era: Speaker of the Illinois House Michael Madigan passes the gavel to Chris Welch 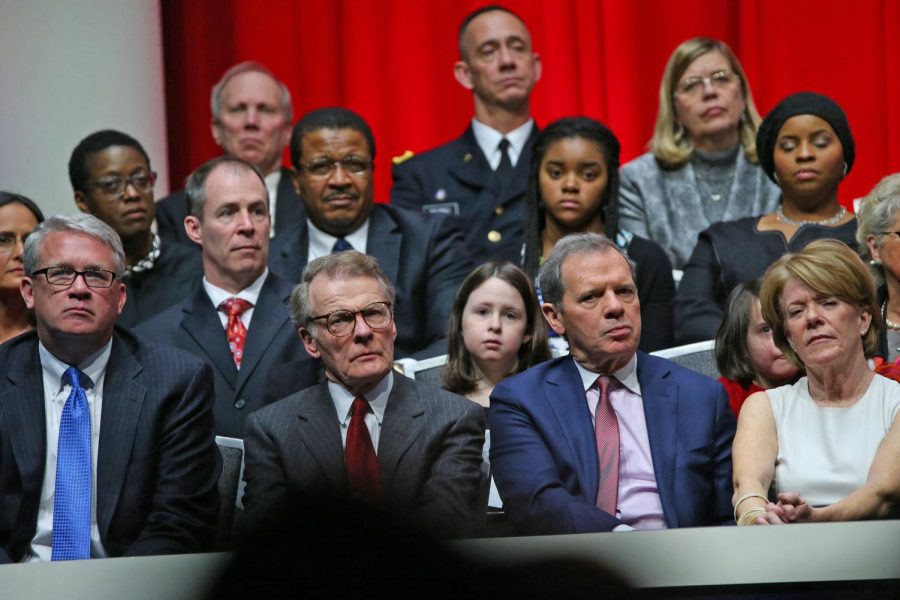 “It is time for new leadership in the House. I wish all the best for Speaker-elect Welch as he begins a historic speakership,” Madigan said in a statement announcing the suspension of his campaign. “It is my sincere hope today that the caucus I leave to him and to all who will serve alongside him is stronger than when I began.”

Four members of Madigan’s inner circle were indicted Nov. 18 for bribery in connection with a scandal involving Commonwealth Edison. They were:  Michael McClain, a ComEd lobbyist, former CEO of ComEd Anne Pramaggiore, lobbyist John Hooker and Jay Doherty, the past president of the City Club of Chicago.

Madigan received 51 votes from the House Democratic Caucus on Jan. 10. In order to win the position a candidate needs to receive 60 votes.

Welch received a call from Madigan on the morning of Jan. 11 he said he will never forget.

“I was going through security and he called me through an unfamiliar number. It was Madigan. He told me he was suspending his campaign, asked me if I was interested in the job and he gave me some advice on how he thought I could get it done,” Welch said.

Being the first Black person to hold the position of Speaker of the Illinois House is long overdue, Welch said.

“I had a moment with my son on Martin Luther King day, we were having breakfast as a family. I have an eight year old son and six year old daughter,” Welch said. “My son asked me, ‘Daddy when was Illinois founded?,’ I said 1818 and I saw his face calculating the number. It took over 200 years for us to get here and that’s what Dr. Martin Luther King was fighting for. This new rule will show little Black girls and boys all over the state that they can accomplish great things.”

Welch hopes to follow in Madigan’s footsteps and is looking forward to moving the state forward with his colleagues.

“I think so far it has been a very smooth transition. Speaker Madigan has been very helpful with me and finding my way around the office. I also think that folks can expect to see the Chris Welch stamp, I’m going to be myself,” Welch said.

Steve Brown worked as a spokesman for Madigan since 1983. Brown, a Southern Illinois University graduate and former Daily Egyptian reporter, will continue on as an adviser to Welch. Brown said Illinoisans can expect a smooth transition of power.

“I think they will continue to see the legislature, especially the House of Representatives, function as a co-equal branch of the government they will do their best to address all the myriad of challenges the state is facing right now from dealing with COVID-19, and the budget deficit and provide services that people are entitled to under the law to continue as well as possible,” Brown said.

Brown said Welch admires what Madigan accomplished over the years and sees it as an inspiration.

“Speaker Welch will set his own path and establish his own identity. I think that he admires a lot of the work Madigan did over the years and finds that as a big inspiration,” Brown said.

According to Welch, the House is hoping to pass new rules on Feb. 10.

“Our caucus has formed a working group. Our plan is to go through that process through the next couple of weeks before we adopt any new house rules. We normally would have approved rules on Jan 14,  Everything is under review,” Welch said.

Welch said he wants to work with Republicans but does not want to mirror the minority party.

“We’re going to make sure we do things ethically. I plan to unify the House by my style of leadership. Just yesterday I reached out to leader Durkin and he said he doesn’t think the last speaker had his cellphone number. I think it’s important that we communicate,” Welch said

Welch also received support from the Illinois Federation of Teachers.

“As a state representative, Speaker Welch has been a friend and ally in protecting middle-class families from devastating cuts to public services and healthcare and an ardent supporter of public education. I have stood with him as he organized grassroots support for the safety of school children,” Illinois Federation of Teachers in a statement released on Jan. 13.