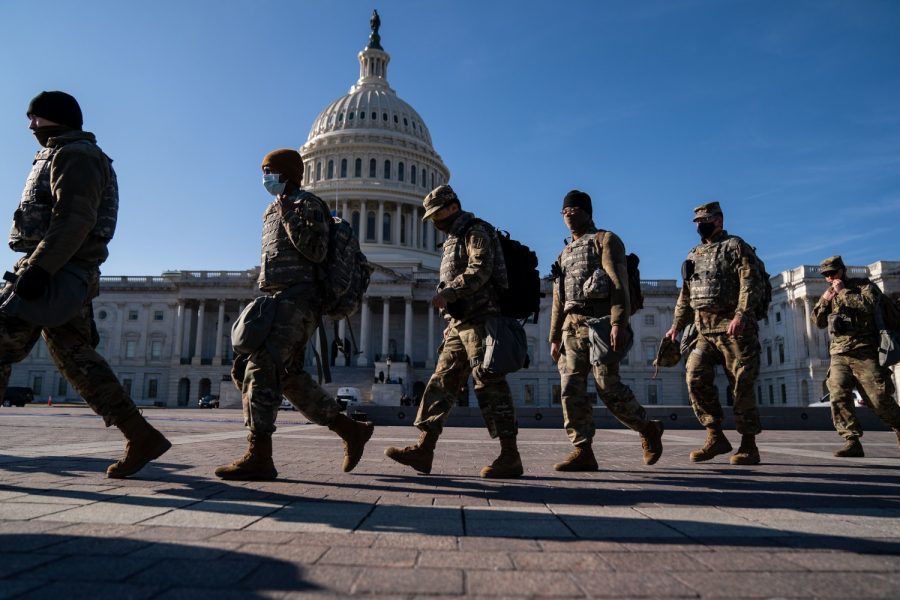 Members of the National Guard, outside the U.S. Capitol Building, a day after the House of Representatives impeached President Donald Trump, and over a week after a pro-Trump insurrectionist mob breached the security of the nation's capitol, on Thursday, Jan. 14, 2021, in Washington, D.C.

Justin Angel, a Staff Sergeant of 13 years in the Army National Guard, had just finished an activation in Chicago, and was prepping for an overseas mission when he got the news the Capitol building in Washington, D.C., had been stormed by supporters of outgoing President Donald Trump.

Angel, a 31 year-old Springfield resident, volunteered to travel to D.C. and assist with securing the Capitol nearly two weeks before the inauguration, along with about 26,000 other soldiers from every state and territory in the U.S.

“We responded to what happened January 6, and we didn’t want that to happen again,” Angel said.

Angel said the days following the Capitol riot were with anticipation as information about what had happened and what he would be doing came in.

“It was exciting in the beginning, and not just like a good type of exciting,” Angel said. “We just kept hearing more and more about it on the news and how more and more soldiers were being stationed there and getting sent there, so it just seemed like a big deal.”

Angel and the other 300 members of the Illinois National Guard who assisted at the inauguration were part of the largest special deployment since Hurricane Katrina in 2005, and the largest domestic security operation since September 11, 2001.

“I’m sure it’s always taken very seriously, but it’s pretty obvious that January 6 kind of heightened that security and awareness,” Angel said. “They just really wanted to make sure nothing even close to that happened during this, you know, historical day.”

The massive operation completely shut down D.C. with roadblocks and checkpoints, and fanned soldiers, police and agents out into federal buildings and parks to manage even slight unrest.

“As most of you would probably know, not much happened,” Angel said.

The National Guard has since drawn down the number of soldiers, but is leaving a sizable force in place.

According to a Jan. 21 press release by the National Guard, “some agencies are requesting continuity of operations, additional support and recuperation time for their forces to regroup. Approximately 7,000 National Guard personnel are anticipated to provide that assistance through the end of the month.”

About 5,000 of those are expected to stay into March in anticipation of potential violence during the senate impeachment trial of Trump, according to Politico.

“It’s cool to see military show up, police show up no matter what, no matter why they’re protesting, no matter why tensions are high,” Angel said. “It doesn’t matter. We’re here to do a job, to keep people safe.”