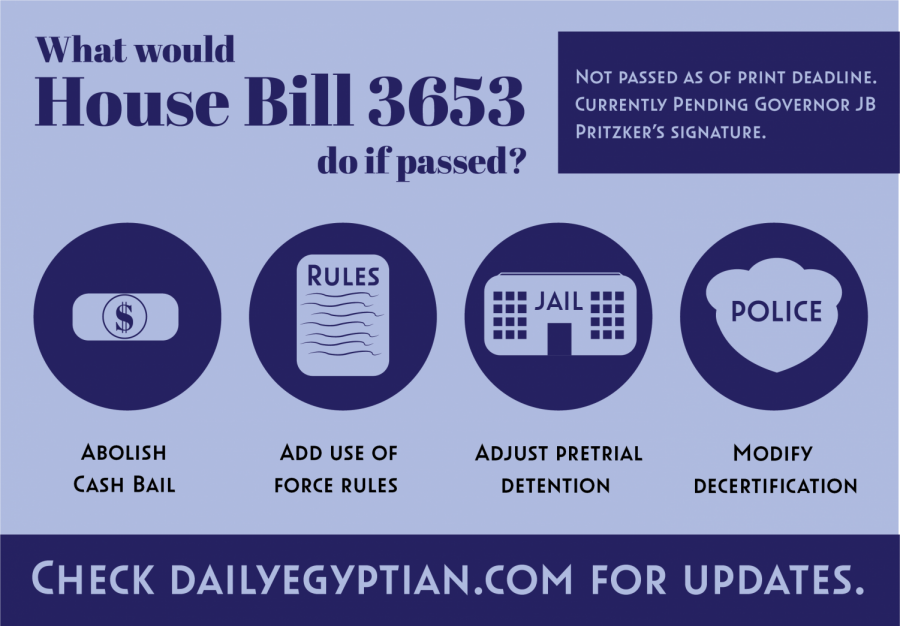 The Illinois Legislature passed what experts say may be the most transformative criminal justice reform bill in the country which would make Illinois the first state in the country to end money bail.

House Bill 3653 would make sweeping changes to the criminal justice process, including abolishing the use of cash bail, adding use of force rules for police officers, adjusting decertification for officers and adding “guardrails” to the pretrial detention process to keep more people out of jail before they are convicted of a crime. The bill was awaiting a signature from Gov. JB Pritzker as of publication deadline.

The Illinois Black Caucus led the effort to pass in the final hours of the legislative session, despite strong objections from police unions and prosecutors who said they opposed new use of force measures and limits to discretion.

Pritzker made ending cash bail one of the centerpieces of his criminal justice platform which was announced in January 2020.

“Partially, it’s just a vindication of the principle of innocent ‘til proven guilty that is supposed to apply in an American criminal court,” Ben Ruddell, director of criminal justice policy with the American Civil Liberties Union of Illinois, said.

Seventy-one percent of the jailed population in Illinois was from pretrial detention in 2015 and three southern counties, Alexander, Pulaski and Union, had the highest rates of jail admissions according to a study by the Vera Institute of Justice.

“We see, you know, 250,000 people pass through Illinois jails every year,” Ruddell said. “Most of them ended up there because they were detained on a money bond that they were unable to pay.”

The ACLU of Illinois assisted the Coalition to End Money Bond and organizations partnering with the Illinois Network for Pretrial Justice draft some of the language for the bill.

The CEMB, which was founded in 2016, includes  Chicago Community Bond Fund, and the Illinois Justice Project, Chicago Appleseed, Shriver Center on Poverty Law, Community Renewal Society, The People’s Lobby, the Worker Center for Racial Justice and a number of churches and faith based organizations, Ruddell said.

Money bail has a long history in the United States, garnering a mention in the Constitution’s Eighth Amendment which states, “Excessive bail shall not be required, nor excessive fines imposed, nor cruel and unusual punishments inflicted.”

The practice underwent a major expansion in the 19th century, according to Shima Baughman, a professor of law at the University of Utah and the author of “The Bail Book: A Comprehensive Look at Bail in America’s Criminal Justice System.”

“Commercial bail became a practice in California and it spread to other states,” Baughman wrote in an email. “The impact of commercial ‘bail bonds’ have been devastating on poor Americans.”

“Being in jail is a punitive measure,” Ruddell said. “The only justifiable reasons to hold a person in jail, pre trial, when they have not yet been convicted of anything, is either because there’s good reason to think that they would pose a danger to other people if they were not incarcerated, or because we think they’re going to willfully run away”

Ruddell said the bail process was intended to be a safeguard against people fleeing court proceedings, and Joseph Cervantez, the State’s Attorney for Jackson County, opposes the bill in part because he wants to retain that safeguard .

“Ultimately, I want to make sure that bail is there to ensure their court appearance, and that’s that’s the most important thing, but ultimately, it has been used to make sure that bad guys stay in jail, and good guys get out.” Cervantez said. “I’ve never misused that, and I don’t know any state’s attorney around here who has.”

But, according to Baughman data and research, people are just as likely to appear in court without the imposition of pretrial detention conditions and unlikely to commit further crimes after their release.

The bill was opposed by police organizations and the Illinois State’s Attorneys Association which both feel the bill’s provisions change funding priorities and limit discretion over the law enforcement process.

“We’re not totally opposed to everything in this bill, but, overall, there are some things that are very concerning to us. And that, that causes us to, you know, remain opposed to the bill,” Shawn Roselieb, the Executive Director at the Illinois Fraternal Order of Police Labor Council said.

The main points of contention for police are mandates for training and body camera implementation which, according to Roselieb, is a “smoke and mirrors” mandate that would divert police funding from other action items into equipment purchases and new staffing to comply with Freedom of Information Act requests.

Reformers like Phil Telfeyan, the Executive Director of Equal Justice Under Law,  believe the complaints from cops about funding are valid, but think the choice is a matter of setting priorities.

“I think law enforcement, especially the higher up, is going to want to protect, you know, their peers, you know, they’re gonna want to protect other cops, which is an important group,” Telfeyan said. “When one priority is deemed by the legislature, the representatives of the people, to be high, like the use of body cams, you have to make some hard choices.”

Telfeyan believes folks entrenched in the law enforcement system are looking out for their own interests by opposing the bill.

“There’s a follow the money theme,” Telfeyan said. “This bill will almost certainly reduce incarceration rates, which typically is how the law enforcement jurisdictions are funded. Sort of that perverse incentive situation.”

Cervantez said state’s attorneys are opposed to the bill because it limits their prosecutorial power through language that requires prosecutors to justify why pretrial detention needs to be used to ensure a defendant appears in court and why less restrictive conditions would not ensure community safety.

Yet, those limits are exactly the points of the reform package that civil rights advocates believe the criminal justice system needs more of.

“Bond court now is a place where judges have lots and lots of discretion, but their discretion is not guided by clear standards, or clear laws, and so it’s kind of the wild west,” Ruddell said. “This bill actually does a lot of work to create those clear standards, and give judges much more, much clearer guidance than they have now.”

Versions of pretrial reform have popped up all over the country in the last five years, including legislation passed in Alaska, New Jersey, and New York, and a state supreme court decision in Missouri which tried to guide judges away from imposing cash bail.

Reforms in those places led to modest decreases in the jailed population, and didn’t see any increases in the crime rate, according to a study from Loyola University, but most of those changes fell short of activists’ goals.

“When you look at New Jersey, they tried to eliminate or at least reduce the use of money bail prior to trial, basically making it a last resort, but judges were so used to using it,” Telfeyan said. “A lot of judges would just, you know, still impose it.”

Illinois passed a limited reform of the pretrial system in 2017 which allowed detainees to receive credit on their bail for time served, and provided for the development of a risk assessment tool to assist in setting pretrial conditions.

The new bill would totally abolish money bonds and give municipalities two years to work on setting up an alternative pretrial system.

“For the next two years, before January 21st of 2023, a judge can lawfully use money bond as a condition of bond, but after that date, they cannot lawfully use that,” Ruddell said.

If the bill is signed, these competing groups will be working to determine the shape of the system that replaces money bail, which the bill sets up guideposts for, but still largely leaves authority with judges.

The worry among reformers is that the current pretrial system will be substituted with a massive uptake in house arrests and electronic monitoring.

“People who are required to be on these forms of surveillance are often required to pay money for the privilege of being surveilled in that way, and somebody else is making a profit off of that,  and that is something that should trouble us all and disturb us all,” Ruddell said. “Some people have actually, because of the problems they’ve had on [electronic monitoring], have indicated that they would have preferred to just remain in jail.”

Another potential unintended consequence of the bill, according to both Cervantez and Telfeyan, could be that police officers or prosecutors will start charging people with higher class felonies so they can justify detaining people pretrial.

“Eventually the public is going to want people to be in jail, period, because of nuisance and because of small property crimes and small nonviolent offenses that are attributable to living conditions in neighborhoods and communities,” Cervantez said.

Cervantez said he feels the Illinois General Assembly is overstepping its bounds by making such a sweeping change, and is doing so just for political clout.