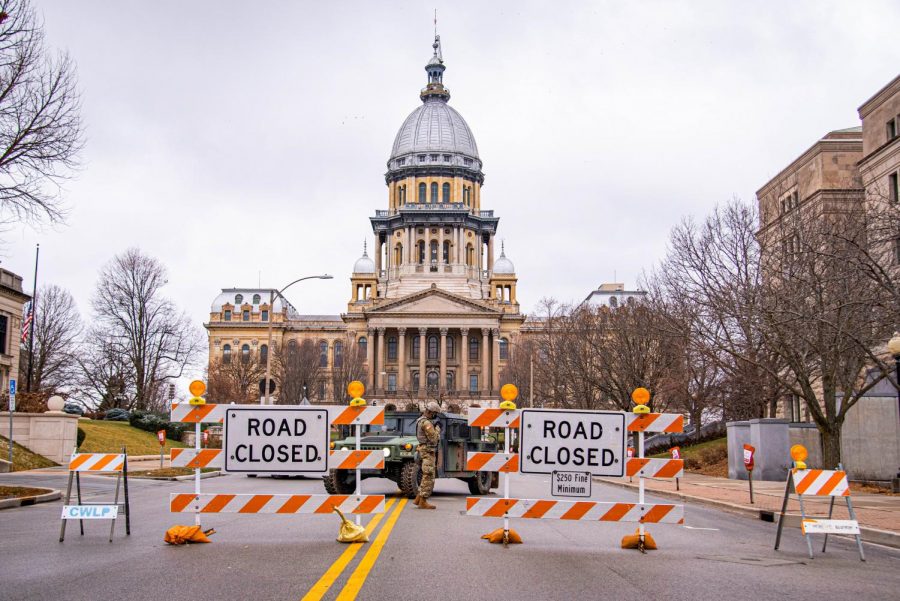 A National Guardsman stands at a road closure in front of East Capitol Ave on Sunday, Jan. 17, 2021 in Springfield, Ill. Gov. JB Pritzker called 250 members of the Illinois National Guard out to keep watch over downtown Springfield after the FBI sent out a memo informing law enforcement agencies of potential riots at state capitols across the country leading up to President-Elect Joe Biden's Inauguration on Wednesday.

Jan Schakowsky, United States Representative for Illinois District 9, plans to introduce a resolution to censure Mary Miller for comments made at a Moms for America rally in Washington, DC the day before the Capitol riots.

Censure can be passed with a simple majority of House members and would force a representative to listen to a statement admonishing them for their actions.

“We can’t allow speakers to get up to crowds and preach things that are so detrimental to people of color or Jews or immigrants, and we’ve had enough of that,” Schakowsky said in an interview with ABC7.

Miller, a freshman congresswoman representing Illinois District 15, has been the target of widespread criticism even from members of her own party since giving a speech in which she said: “You know, if we win a few elections, we’re still going to be losing unless we win the hearts of our children. This is the battle. Hitler was right on one thing. He said whoever has the youth has the future.”

Miller gave the speech at a rally organized to encourage people “rising up to save the Republic for our families,” according to the event description on the Moms for America Facebook page.

Miller released a press statement on Jan. 8 which included an apology for her speech:

“Earlier this week, I spoke to a group of mothers about the importance of faith and guarding our youth from destructive influences. I sincerely apologize for any harm my words caused and regret using a reference to one of the most evil dictators in history to illustrate the dangers that outside influences can have on our youth. This dark history should never be repeated and parents should be proactive to instill what is good, true, right, and noble into their children’s hearts and minds. While some are trying to intentionally twist my words to mean something antithetical to my beliefs, let me be clear: I’m passionately pro-Israel and I will always be a strong advocate and ally of the Jewish community. I’ve been in discussion with Jewish leaders across the country and am grateful to them for their kindness and forthrightness.”

Miller was part of a coalition of Republicans that called the validity of the 2020 presidential election results into question, and joined 139 members in the House to vote against certifying the results.

Mike Bost, who represents Illinois District 12, and Miller were the only representatives from Illinois who voted against certification.

“Many Americans have lost confidence in the fairness of our electoral system. By objecting to certain electors on Wednesday, I hope my colleagues and I send a message to those men and women that we will not sit idly by while our Constitution is trampled on,” Miller said, according to a Jan. 5 press release.

House Democrats are pointing to that rhetoric and other actions by Republicans as grounds for disciplinary action.

“We must hold these Republicans accountable for their role in this insurrection at our nation’s Capitol as part of a racist attempt to overturn the election results,” Rep. Cori Bush said according to a Jan. 11 press release.

Bush introduced House Resolution 25 to investigate  and potentially expel members of the House that, “sought to overturn the 2020 Presidential election.”

The bill has since been co-sponsored by fifty four members of the House, including Illinois representatives Danny Davis, Jesus “Chuy” Garcia, Marie Newman, Bobby Rush, and Schakowsky.