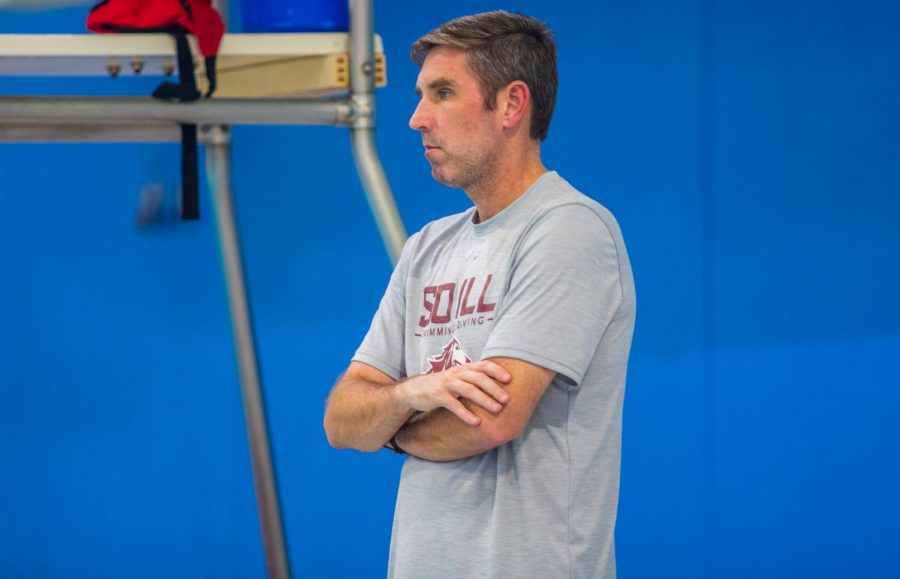 The Southern Illinois University men’s and women’s swimming and diving programs missed out on an opportunity to compete in postseason play due to the pandemic in 2020, but they will have an opportunity to get another shot at the Missouri Valley Conference title.

Head coach Geoff Hanson said he expects SIU to be a contender in the conference and is pleased to see their ranking.

“Finishing second last year was great, our goal is always to win. I think that being regarded as one of the top tier teams is where we expect to be. But nobody has proved anything yet and I think we got a lot of secret weapons that no other team knows we have,” Hanson said.

Adam Cernek, a sophomore who competes in the backstroke and intermediate, won multiple conference awards including MAC co-swimmer of the year and freshman of the year. He also set two university records in his freshman season in the 100 yard and 200 yard backstroke.

“It’s hard to say where I’m at right now, but the practice form looked to be good so I think if I manage to keep it up there’s a pretty good chance [to improve on last seasons times],” Cernek said.

Cernek said the team’s biggest goals are improving their times and preparing for conference. He added he wants the team to improve to at least a second-place finish in the MAC championship tournament, which is April 8 at Miami (Ohio) University.

Cernek also added he wants the team to move up to at least second place this season in the conference tournament.

Sierra Forbord, a senior who competes in the butterfly and freestyle, said she was excited that the women’s team was ranked second in the MVC preseason poll.

“Working hard this season is going to be really important and just focusing really hard and coming together as a team to be better overall,” Forbord said.

Cassidy Lounsbury, a senior who competes in the butterfly and freestyle, said the team will need to come together this season more than before.

“I would love to win a conference championship, but second place is amazing as well,” Lounsbury said.

The swim and dive program has a lot of newer and younger competitors this season after losing 23 seniors total; 13 women and 10 men.

“The new freshmen are pretty fast and I bet they’re gonna be pretty hungry so I think the team dynamic is good,” Cernek said.

“It was really sad to lose a lot of the seniors, a lot of them were super fast too and contributed a lot to our team. We also brought in a ton of new freshmen and they have a lot to offer to our team as well,” Forbord said

Fordbord and Lounsbury said they will try to lead by example and help the younger members of the team.

Hanson said his team had been dealing with positive COVID-19 tests along with adjusting to practices. The team has also had to split up practices to socially distance the team.

“For us as coaches, it means double, maybe triple the time on the pool deck when we could normally train the whole team together, but that’s ok, that’s our job. We had basically the whole summer with no training and then a long winter break so we’re charged up and ready to push through the spring semester,” Hanson said.

Hanson also said some members of the team didn’t have access to a pool during the summer and that slowed some people down in preparation for the upcoming season.

“The women’s team doesn’t get to train with the men as much as we usually do which is kind of weird and some people I see more often than others since we’re split up so much,” Forbord said.

Lounsbury also said that practice has looked different this year.

“We don’t get to practice all together as a team anymore, we’re all split up. It’s been a big change but for the most part I feel like I’m still getting the same out of practice as I would have without COVID,” Lounsbury said.

The team’s season will officially begin on Feb. 12 at Evansville, a late start to their usual October season kickoff.

“We feel good about it, it gives us time now that we’re back to give us some breathing room where we don’t feel like like we gotta be ready for our big meet in five or six weeks,” Hanson said

Cernek said the team was able to get in the full 20 hours of practice most weeks and commented on the season delay.

Forbord said it was different not being able to go home during Thanksgiving and winter break this year.

“Having our season pushed back, honestly will be really good for us. Because from now until April, when conference is, will all be training, we won’t have any interruptions,” Forbord said.

Forbord said the meet against Missouri State on March 5 and 6 is the one she looks forward to the most.

“As a senior it’s kind of nice for us because we get that extended season, just a little longer to actually do our sport a little more. But it will give us a little bit of that extra time, that extra few months that I think if we use it to our advantage we can make it really positive for us,” Lounsbury said.