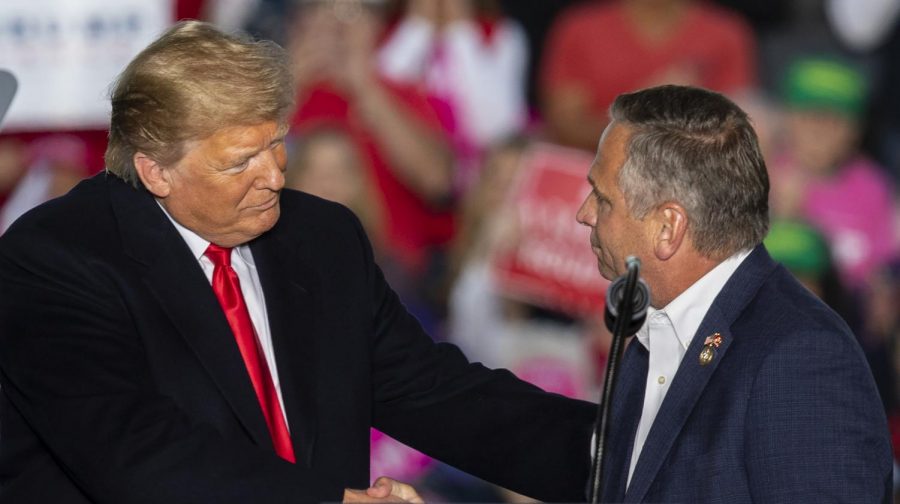 Representative Mike Bost (IL-12) continues to support President Donald Trump by opposing impeachment and disputing the results of the 2020 election despite the Jan. 6 insurrection at the Capitol.

On Wednesday, Bost voted against the second impeachment of Trump and said in a statement:

“If we are truly going to begin the work of healing the deep divisions in America, we must first turn down the temperature and tone down the rhetoric. I fear that efforts to impeach President Trump or force Vice President Pence to invoke the 25th Amendment will only make a bad situation worse. Therefore, I strongly oppose Speaker Pelosi on both tactics, which are being rushed through Congress with unprecedented speed and little opportunity for the president to defend himself. President Trump has committed to a peaceful transition of power one week from today; and we would all be best served by dedicating that short time to making the process as seamless as possible.”

Bost condemned the Jan. 6 violence at the Capitol by calling it “un-American” in a statement, but he has not publicly condemned Trump or his rhetoric.

In an interview with WSIL News 3, Mark Kiesling asked Bost whether he thought Trump or Trump’s son who spoke to protesters at a rally before the riots took place were culpable in inciting the mob that stormed the Capitol.

“I don’t think they are culpable,” Bost said. “Many people have never liked how Donald Trump speaks. He’s a New York business guy and he kinda just lets it fly out there. The problem is that, and remember he’s never claimed to be a politician, many people who have served in these offices have to be careful on the words they say. No matter what a person says it doesn’t justify violating the law.”

A closer look at what Trump said to his supporters just before they stormed the Capitol, where he told them to “fight like hell” and that he was going to accompany them to the Capitol can be found below.

These acts and others resulted in Trump being impeached for the second time on charges of “incitement of insurrection” and led to him being banned from Twitter, Facebook and Instagram.

Bost also voted on the evening of the insurrection to not certify the electoral college votes in Arizona or Pennsylvania, and he previously signed on to the Texas lawsuit challenging the results of the presidential election.

Over 2,100 people have signed a petition to “recall Mike Bost.” There is also a petition to support Bost, but as of publication deadline it had no signatures.

Harper said he is a recent convert to voting Democrat and he considers himself more of a centrist than anything. Eight years ago, he said he voted for Mike Bost.

“The fact that he is still in Donald Trump’s corner baffles me,” Harper said. “I don’t see how that could or should be supported considering how Mike Bost always touts his Christian values. You want to talk about having Christian values you need to live that to the fullest. I was raised in a private church setting and I take that thing kind of seriously I just don’t see how you can call yourself Christian on one hand and then support a demagogue like Donald Trump.”

Linda Flowers, President of the Carbondale NAACP, said Bost has been “in lock step” with Trump.

“His silence, his failing to correct people, his voting to undermine the votes and disenfranchise voters and undermine the people,” Flowers said. “In my mind he is just as guilty for causing this Wednesday insurrection as Donald Trump.”

Flowers said as a former teacher, she understands the importance of leadership and said Bost has failed to provide that leadership or unite the people of the 12th district.

“We have people from Southern Illinois who were in DC on Wednesday and who have those views and we’re as divided in Southern Illinois as the country is and it’s because of a lack of leadership from our legislator, namely our representative Mike Bost,” Flowers said.

Flowers said she would like to see Bost accept responsibility for his actions and to try to be the representative for all of the people of the 12th district moving forward.

“Rev. Dr. Martin Luther King once said there comes a time when silence is betrayal. As far as Mike Bost and other legislators are concerned, their actions, their votes, speak louder than their words that they speak now after what happened on Wednesday, Flowers said. “So I would like for him to now make an attempt to be the representative for all the people of the 12th district and try to unite us rather than to remain silent and let this divisiveness that exists in the country and that exists in our district continue.”

Not everyone in district 12 disagrees with Bost. Jeff Diederich, Chair of Williamson County Republicans and a Marion Resident, said he agrees with Bost’s approach to impeachment and condemning the riots and he doesn’t blame Trump for what happened at the Capitol.

“We feel very strongly that our President in no way encouraged that type of uprising that caused that,” Diederich said. “In fact I think that his words were well spoken in the sense that he encouraged people to be heard, their voice to be heard and to offer peaceful protest.”

Diedrich said Bost’s decision to not impeach Trump was practical.

“The President has literally a few days left in office and to subject the American people to not only the process of an impeachment trial, but also the cost of the impeachment, that process in itself serves no purpose,” Diedrich said. “We’re looking to unite. Unite as a country. To heal and to continue to push forward an agenda of division by trying to impeach a President who is on his way out anyway serves nothing towards furthering that effort and for that effort I commend Mike Bost and his decision.”

The Daily Egyptian contacted Bost over a dozen times this past week but he declined to comment or answer additional questions.

On Tuesday his press secretary said the only way Bost would be willing to speak with us would be via a written statement, so we sent questions including one that asked him whether or not he still supported Donald Trump and another that asked if he saw a connection between challenging the validity of the election results and the riots that occurred Jan. 6. As of publication deadline, Bost had not responded to these questions.