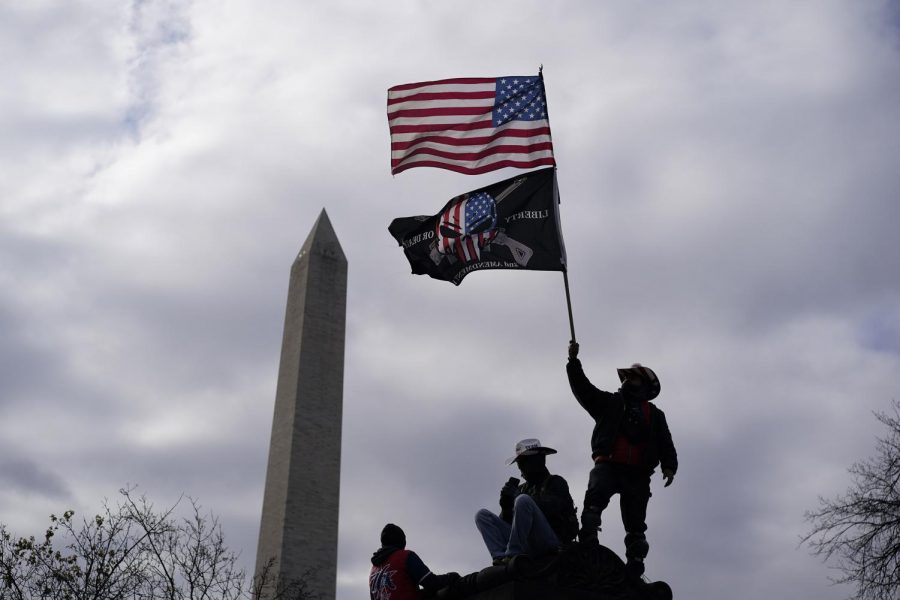 Protesters gather on the second day of pro-Trump events fueled by President Donald Trump's continued claims of election fraud in an attempt to overturn the results before Congress finalizes them in a joint session of the 117th Congress on Wednesday, Jan. 6, 2021 in Washington, D.C. (Kent Nishimura/Los Angeles Times/TNS)

WASHINGTON — Supporters of President Donald Trump who want Congress to overturn his Electoral College loss clashed with Capitol Police, breached barriers and stormed into the Capitol on Wednesday, while lawmakers were in the midst of certifying the election results, causing a lockdown of the Capitol campus.

The two chambers, in the midst of debating objections to Arizona’s electoral votes, were evacuated. Vice President Mike Pence, Senate President Pro Tempore Charles E. Grassley and Speaker Nancy Pelosi, all in the presidential line of succession, have been taken to secure locations by Capitol Police and the Secret Service.

The scene was chaotic as animated groups of pro-Trump protesters met a line of Capitol Police officers en route to the Capitol, where Congress is poised to certify President-elect Joe Biden’s Electoral College victory, despite several pairs of Senate and House Republican objectors. Because of an internal security threat, the Capitol Police at 2:18 p.m. Wednesday issued a lockdown of the Capitol complex, urging people to move into the nearest office, lock doors, take emergency equipment, and stay away from external doors and windows.

The Capitol Police at 2:03 p.m. urged all occupants of the Cannon House Office Building to move to Rayburn and Longworth, which are accessible from Cannon through underground routes, which are closed to the public Wednesday.

Just minutes later, the Capitol Police halted any movement into or out of all buildings on the Capitol campus. “All buildings within the Capitol Complex, Capitol: Due to an external security threat located on the West Front of the U.S. Capitol Building, no entry or exit is permitted at this time,” the alert said. “You may move throughout the building(s) but stay away from exterior windows and doors. If you are outside, seek cover.” Earlier, the Capitol Police ordered the evacuation of both the Cannon House Office Building and the James Madison Memorial Building of the Library of Congress. Madison was first evacuated at 1:10 p.m., and Cannon followed at 1:22 p.m.

Minutes later, at 1:39 p.m., the Capitol Police announced an internal relocation at Cannon. “INTERNAL RELOCATION: The Cannon Building is executing internal relocation due to police activity. All other staff should remain inside their building until further guidance is received from USCP. If you are outside a building on Capitol Hill, follow the direction of law enforcement officers,” the alert read. “If you are in the Cannon Building, take visitors, escape hoods, and Go Kits and report to the South tunnel connecting to the Longworth. Further information will be provided as it becomes available.”

At 1:47 p.m., the department announced the evacuation was all clear. “ALL CLEAR. The evacuation of the Cannon has been cleared, and any associated road closures will clear momentarily,” the alert said. “Reentry is authorized.” Around 12:45 p.m., across from the Russell and Dirksen Senate office buildings, pro-Trump protesters gathered, cheering and chanting. Large screens were erected, playing Trump’s speech, to cheers from the crowd. There was a heavy police presence, and temporary fencing was set up at the edge of the driveways in front of the Capitol. Police were stationed inside the fencing in front of the Capitol building.

People were seen carrying Trump/Pence flags, American flags, Gadsden (“Don’t tread on me”) flags, and signs that say things like “Do Not Certify.” The crowds could be heard cheering and chanting a variety of phrases, including “stop the steal” and “fight for Trump.”

Near the House side of the Capitol, someone could be heard preaching earlier Wednesday morning. One group declined to share their names or where they were staying, but said they came as a group on a bus to Washington from Ohio. Many protesters were wearing coats and jackets, but mask-wearing was sporadic.