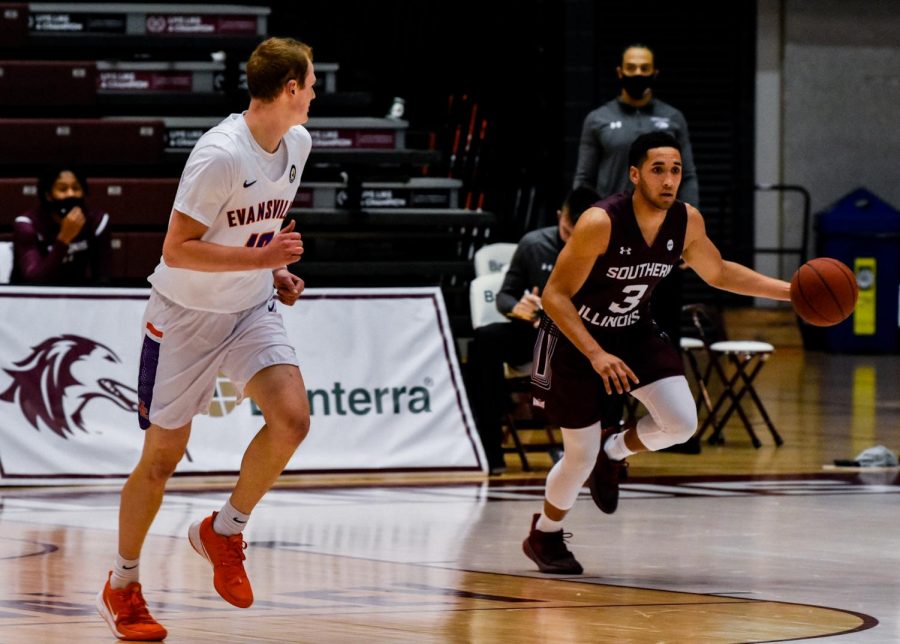 The Salukis managed to stay close at the end of the first half, but the Bulldogs pulled away in the second half of the game due to their defensive pressure and scoring from senior forward ShanQuan Hemphill.

“I give a lot of credit to Drake, I think their defensive pressure bothered us tonight. It forced a lot of turnovers and created an offense for them,” head coach Bryan Mullins said.

Sophomore guard Lance Jones led scoring for the Salukis with 18 points and Hemphill led for the Bulldogs with 17 points.

Jones increased Southern’s with a 3-pointer making the score 9-4.

Drake ended SIUs run with a basket from Brodie. This was quickly followed by a 3-pointer from the Salukis’ sophomore guard Trent Brown.

A defensive rebound from Jones led to a dunk by Kyler Filewich assisted by Domask.

The Bulldogs fought to shorten the Salukis lead with scoring from junior guard D.J. Wilkins, sophomore guard Joseph Yesufu and redshirt freshman forward Nate Ferguson, but the held the lead 22-15,

Free throws from Penn and Wilkins, and a basket from Brodie decreased SIUs lead to 22-20 near the end of the first half.

The Bulldogs tied the score with a basket from redshirt senior forward Tremell Murphy and a layup from Hemphill gave Drake the lead 24-22.

Drake gained a six-point lead late in the first half with a basket from Hemphill and a layup from Ferguson.

Southern ended the first half with a 3-pointer and two free throws from Jones but it was not enough to gain the lead ending the half with the score 39-30.

Hemphill led scoring for the Bulldogs at halftime with nine points and Jones led for the Salukis with 11 points. Jones led SIU in rebounds with four.

Jones started the second half for the Salukis with a basket, which was followed by a layup from Drake’s Brodie making the score 41-32.

A steal and layup from Hemphill and a 3-pointer from Wilkins increased the Bulldogs lead further.

SIU cut Drake’s lead down to eight with two free throws from Jones and a layup from freshman guard Dalton Banks.

Southern continued fighting to decrease Drake’s lead with scoring from Banks, Jones and Harvey, but a 3-pointer from Wilkins and a dunk from Hemphill helped keep their lead, 55-44.

Late in the second half, both teams scored back and forth but Drake continued to lead by 10 points.

The Bulldogs’ lead increased to 13 points after a 3-pointer from junior guard Garret Sturtz and a steal and dunk from Hemphill, making the score 64-51.

“I think [Hemphill’s] energy is what makes him a special player, he is obviously having a great year and he plays hard every single possession,” Mullins said.

Drake secured the victory at the end of the game with three 3-pointers from Wilkins, Penn and Yesufu leaving the Salukis unable to catch up, ending with the score 73-55.

Southern will face Drake again at the Knapp center on Jan. 4 at 6 p.m.