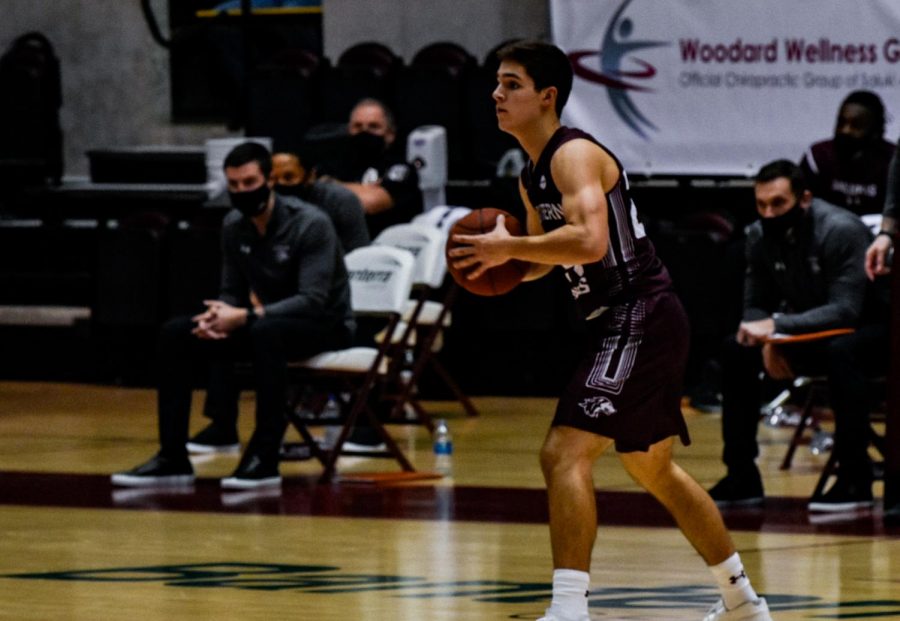 Trent Brown (24) tries to defend the ball against the Evansville Purple Aces Friday, Dec 28 2020, at the SIU Bantera Center in Carbondale IL.

The Salukis started the game off of a Sunday night win, 63-57 over the Aces and a 7-0 start to their season, the best season start record for the program since 1947.

“[Curtis] is a shifty guard, he hit a bunch of threes tonight so he is just a solid player,” Domask said.

The Salukis started the game with a quick basket from sophomore guard Trent Brown, followed by a 3-pointer from Evansville’s senior guard Noah Frederking.

The Aces lengthened their lead early in the first half with another 3-pointer from junior guard Jawaun Newton making the score 6-2.

A free throw from senior forward Anthony D’Avanzo and a 3-pointer from sophomore guard Lance Jones tied the score 6-6.

Southern ended the run with a basket and 3-pointer from  Domask and a layup from sophomore forward Sekou Dembele bringing the score to 15-13.

Both teams traded points near the end of the first half, but SIU gained the lead with a layup from sophomore guard Ben Harvey and two 3-pointers from Domask making the score 27-20.

The Aces fought to decrease the Salukis lead at the end of the first half with scoring from Curtis, grad. student forward Jax Levitch, Frederking and Kuhlman, but SIU maintained the lead ending the half 39-35.

Domask led scoring at the half for Southern with 15 points and Curtis led scoring for the Aces with 11 points.

“I thought [Domask] tried to compete throughout the whole game, things weren’t going our way but he made some big shots that kept us in the game,” Mullins said.

Southern started the second half with two free throws from Harvey, which was quickly followed by a 3-pointer from the Aces’ Frederking.

Evansville took back the lead with a 3-pointer from Curtis making the score 44-43. SIU quickly regained the lead with two layups from Kyle Filewich.

Evansville lengthened their lead with a layup from Enaruna, a 3-pointer from junior guard Shamar Givance and a dunk from Curtis.

SIU continued fighting to decrease the Aces lead with a 3-pointer from Brown and a layup from freshman guard Dalton Banks making the score 65-59.

Both teams continued scoring near the end of the second half, but Evansville kept the lead 74-67.

The Salukis take the court again on Jan. 3 against Drake at the Knapp Center.