Salukis complete the sweep with victory over the Hawks 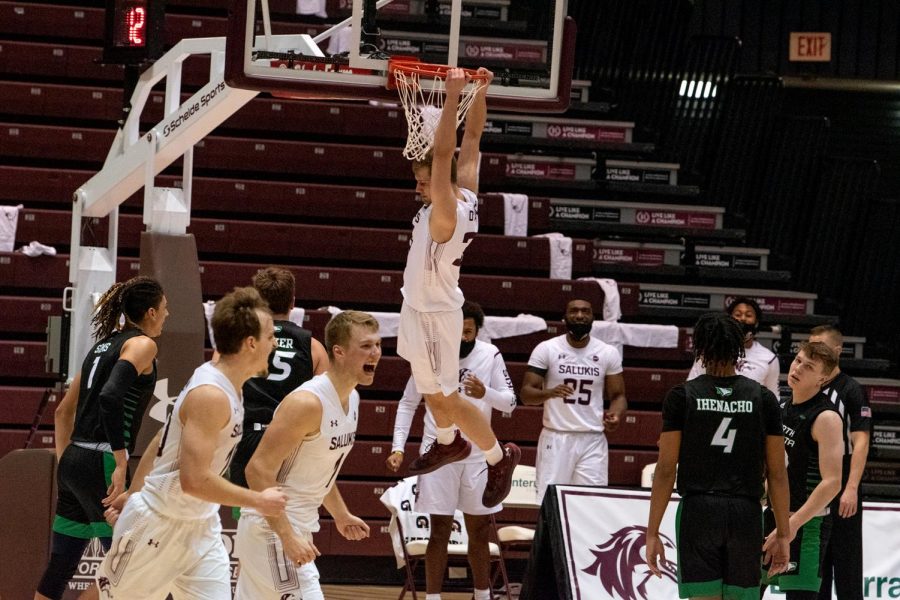 Anthony Avanzo dunks a shot during the SIU vs. North Dakota game Friday, Dec. 18, 2020, at the SIU Bantera Center in Carbondale Ill. SIU won with a final score of 62 to 50.

Southern Illinois men’s basketball program earned their fifth win of the season over the North Dakota Hawks on Dec. 18 with the help from a 17-point performance from sophomore forward Marcus Domask.

“I’m incredibly proud of our guys, it’s a great experience to have these back-to-back games for the coaches and for the players. […] It’s not easy to beat anyone twice,” SIU head coach Bryan Mullins said.

Domask led scoring for the Salukis with 17 points and junior forward Filip Rebraca led for the Hawks with 11 points.

“I thought Marcus bounced back really well today and was really decisive in all of his actions,” Mullins said.

North Dakota started off the game with a 3-pointer from junior guard Seybian Sims assisted by freshman guard Tryee Ihenacho.

The run was ended by a layup from Rebraca, and was followed by a 3-pointer from junior guard Ethan Igbanugo.

North Dakota fought to shorten the Saluki lead with a free throw from Igbanugo and layups from sophomore forward Gertautas Urbonavicius and junior forward Mitchell Sueker bringing the score to 19-15.

Scoring between both teams went back-and-forth at the end of the first half, but Southern finished the period ahead with the score 29-25.

Domask and Filewich led scoring at the half for SIU with seven points each and for the Hawks,  Sims, Igbanugo, Urbonavicius and Rebraca tied for leading scorer with six points each.

Southern Illinois started the second half with a layup from Jones and a basket from Domask.

Despite the Hawks early run in the second half, Southern’s lead increased with scoring from Harvey, Domask and D’Avanzo making the score 46-33.

Both teams scored continuously at the end of the second half, but the Saluki lead was too large for North Dakota to overcome and SIU came out with the 62-50 win.

Southern will take the court again on Dec. 21 against Butler University in Indianapolis at 6:30 p.m..