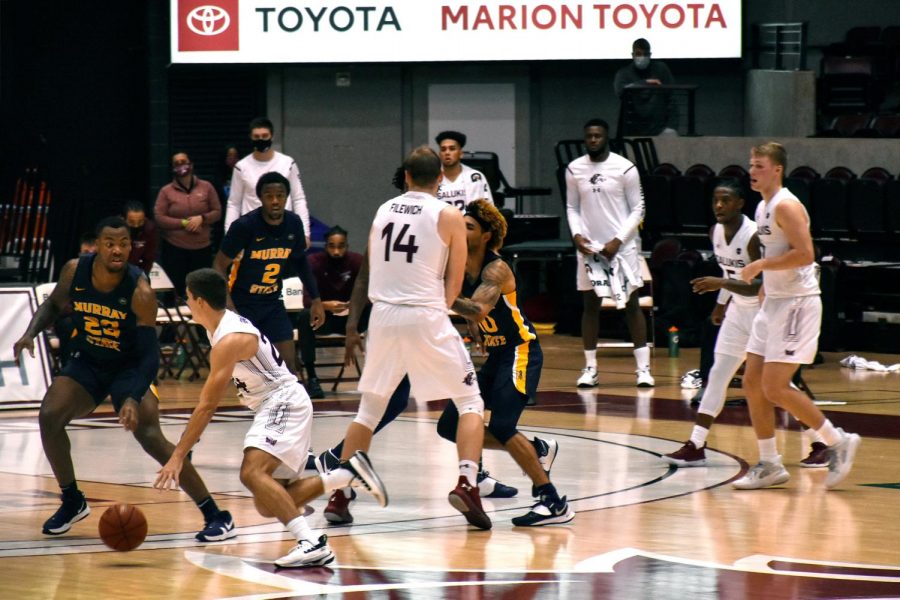 Trent Brown makes his way down the court in the Murray State game Friday, Dec. 11, 2020, at the SIU Banterra Center in Carbondale Ill. SIU won with a final score of 70-66.

In the last minutes of the second quarter, SIU made seven free throws that secured the win against Murray State, 70-66.

On Dec. 12, the Salukis (3-0) took on the Racers (3-2) at the Banterra Center. Each team scored steadily throughout the game, but the Salukis held the lead until the very end.

For the Racers, junior forward KJ Willams led the team in scoring with 17 points.

Southern started off the game with 3-point baskets from sophomore guards Ben Harvey and Lance Jones.

Murray State ended the six point run with a layup from Williams.

The Salukis took a 12-2 lead early in the game with a jump shot from Harvey and a 3-pointer from sophomore guard Trent Brown.

Murray fought to close the gap with a 3-pointer from Williams and a layup from sophomore forward Demond Robinson making the score, 12-7.

The Salukis and the Racers continued trading points throughout the first half, until Murray State tied the score, 21-21, with two 3-point baskets from junior guard Brion Whitely.

Southern took the lead once again near the end of the half, closing it out with a 3-point shot from Jones to make the score 40-32.

D’Avanzo led the Salukis in scoring in the first half with 10 points and for the Racers, Williams led with eight points.

The Salukis started off the second half with a layup from Domask. Soon after, Murray State answered with a 3-point shot from Williams.

Despite Murray State’s steady scoring, Southern held the lead throughout the second half with baskets from Domask, freshman guard Dalton Banks and freshman center Kyler Filewich.

The Racers regained the lead in the final minute of the second half with two free throws from sophomore guard Chico Carter Jr. making the score 64-63.

Southern secured the win, 70-66, finishing the game with a seven point free throw run from Jones, Banks, Domask and D’Avanzo.