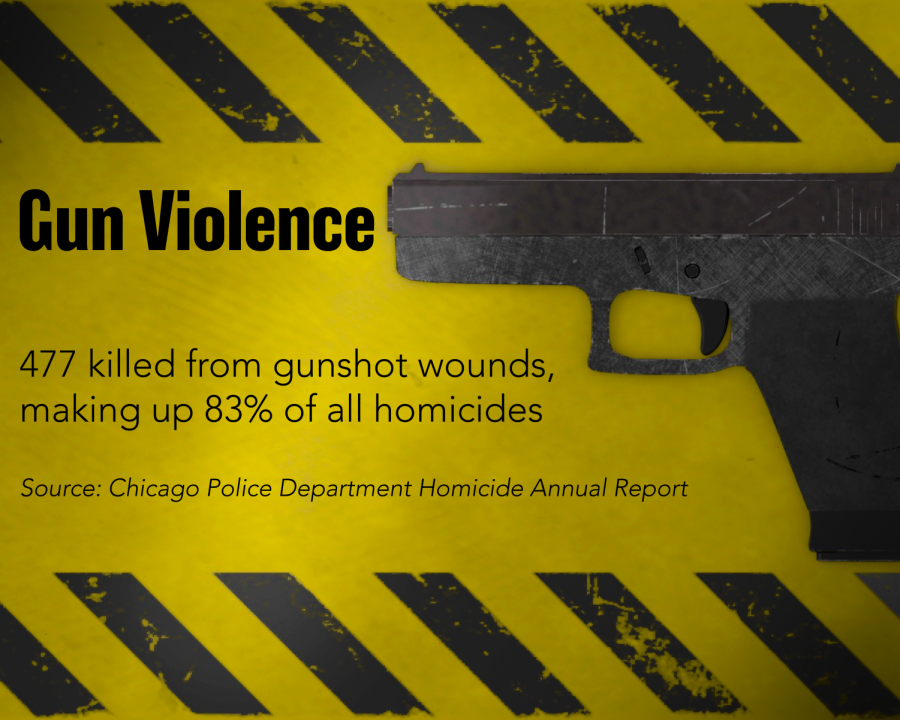 Gun shots ring out as bystanders run to take cover, empty shell casings cover the streets from what’s left of the crime scene, family members mourn their loved ones who lost their lives, gun violence claims the lives of new victims every day within the cities of Chicago and St. Louis.

Tammy Kochel, professor of Criminology and Criminal Justice at SIU, said determining an exact cause of gun violence can be difficult, since there are a variety of factors contributing to gun violence, but various studies have been conducted to analyze some of the causes in the cities of Springfield and St. Louis.

“We took the time to kind of plot where they were occurring, when they were occurring, are they related, or did they seem to be related to areas of darkness? When those shots were fired, were they occurring at night? Were they near vacant or abandoned houses? Were they near homes where we also saw arrests for drugs,” Kochel said. “So we kind of looked at, were these on the street, or were they located in homes? Could they be related to drug offenses or drugs sales? Were they drive-bys, and thus may be related to some kind of group event? That kind of thing.”

“I think the data will bear out, they often occur in places where we see lots of disadvantage, which is also where we see higher proportions of minority residents, and so I do think it is disproportionate,” Kochel said.

Firearms are a lethal weapon and they are the deadliest type. A gun can be used for assaults, protection, homicides, and even suicide. Gun violence is so widespread and there’s different components to examining it.

It’s also essential to remember gun violence is more than just homicides. While gun violence can claim the lives of victims, there are victims who are still alive. There’s more to gun violence than a crime against one another; suicide is also another factor of gun violence.

“In terms of gun violence, I’m not sure to what extent you’re aware of this, 60-61% of gun violence is suicide. Only about 35% is due to homicide, and that’s nationwide but similar statistics in large cities as well,” Kochel said.

Chicago has experienced gun homicides for decades, various organizations within the city have come together to put an end to gun violence in the city before it claims the lives of more victims.

Strides recognizes gun violence is negatively impacting the community, so they partner with other organizations in the city, and host several events to raise awareness about gun violence and make efforts to put an end to it.

“We partner with the Chicago Sympathy Orchestra who has a song writing project, where they work with others, and loved ones who were lost to gun violence and compose original pieces about the person who was lost,” Saunders said. “And then perform them with professional musicians of Pacific Orchestra, and so we’ll have a performance of that or a concert or young people from the community who are emerging talent, and the idea of having all these components there is to connect with people who are a different parts of their lived experience, and also their understanding and engagement of gun violence,”

“This is Mary Stonor Saunders opinion as opposed to Strides, but if you live in a world where 14-year-olds who live in poverty, in a segregated under resourced disenfranchised community can get a gun, but he can’t get a head of lettuce, it’s too many guns,”

Many of the areas subjected to gun violence are areas that provide less opportunity to the youth, and the youth find themselves getting involved in situations that don’t always have the best outcomes. Again, there’s no exact way to define gun violence, but there are factors leading to gun violence affecting some areas more than others.

“Gun violence is always a mixture of the presence of guns, the absence of opportunities, systemic and racism, mass incarceration, there’s a whole decentralization of guns that leads to little mini, like cliques that have no structure, discipline, or sentence,” Saunders said.

The city of St. Louis is facing similar issues with gun violence and the high homicide rates, in 2018, the Pew Research Center declared St. Louis has had the most murders per capita than any other city in the United States since 2014.

Jessica Meyers, the coordinator of St. Louis Area Violence Prevention Commission, said St. Louis has a higher homicide rate as a result of the location and the way the city is set up. In St. Louis, there’s a different report for the county and the city as well.

“St. Louis is a very unique city, in that St. Louis is a sovereign city, where they are also their own county. In St. Louis county, it’s a separate county,” Meyers said. “I believe that the only other city like that I can think of is Baltimore, and if you notice tends to be on the higher end of these type of statistics, and part of that is because other cities like Chicago, when they report of crime, they have more suburban areas included as well,”

The St. Louis Area Violence Prevention Commission was convened in 2016 by the United Way of Greater St. Louis, and Washington Universities gun violence initiative. This commission examines the region as a whole and recognizes the factors leading to violence are more difficult to define. There’s groups of different sectors that are involved in violence prevention.

“We have a lot of different projects that are going on depending on which committee you’re looking at. I think the most important is our community engagement. It’s really about trying to bring the community’s voice into places that it’s not necessarily always heard, like policing decisions. And so in addition to doing community engagement around our police legitimacy recommendations we’re also doing leadership and community development,” Meyers said.

The St. Louis Area Violence Prevention Commission also gives back to the community in an effort to prevent gun violence. Being involved in the community and taking on leadership opportunities can make positive contributions to end gun violence.

“I got involved with this because when kids in CPS were getting shot every week, or every other week, nobody seemed to care. This is like we live in the world’s richest, powerful county, and no one is caring that this is happening,” Saunders said. “The most important things to change is not going to be some model of behavioral change imposed on a community, but it’s about recognizing that this is real. Could you imagine your 10-year-old everyday has to walk by the corner, and someone was shot and killed?”