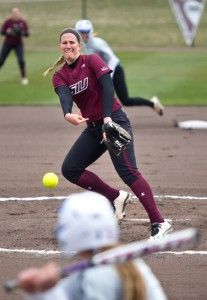 The SIU softball team dropped two games against Drake in a doubleheader Saturday that opened conference play for both teams at Charlotte West Stadium.

In what was scheduled to be a three-game series, Sunday’s series finale was canceled because of inclement weather and unfavorable field conditions.

The Salukis were coming off of a Tuesday doubleheader at Austin Peay where they struggled to find a rhythm and fell to the hands of the Lady Governors 11-7 and 8-2, respectively.

Coach Kerri Blaylock said she was unpleased with her team’s performance.

“I give all the credit in the world to Austin Peay,” Blaylock said in a Saluki Athletics release. “They came out ready to play and played hard, and we just didn’t play well at all.”

The Salukis followed their poor play against Austin Peay with sloppy defense in game one of Saturday’s double-header against Drake en route to a 9-7 Bulldogs defeat.

SIU (10-13, 0-2 Missouri Valley Conference) battled back from an early deficit, but its defense cost them as the Salukis committed four errors, Drake (16-10, 2-0 MVC) took advantage by scoring four unearned runs off of the Salukis’ mistakes.

“Our defense, which has been solid all year, let us down,” Blaylock said. “The first game was frustrating to me because I feel like we gave it away.”

The Bulldogs jumped out to an early lead as the Salukis trailed 4-1 after two innings.SIU scored it’s second run off of a solo shot from sophomore outfielder Meredith Wilson in the bottom half of the second inning, her fourth of the season.

After a scoreless third inning, the Bulldogs extended their lead to 6-2 in the fourth inning after scoring two more unearned runs on an junior infielder Jayna Spivey error, her second of the game.

The Salukis scored in the inning’s bottom half on another solo home run, this time by senior outfielder Michelle Bradley.

Drake added another two runs in the top of the sixth inning to put the Salukis in a six-run hole, which was Drake’s biggest lead of the game.

The Bulldogs’ next runs came from junior shortstop Amy Pierce’s solo deep shot along with an unearned run on SIU’s fourth error.

The resilient Salukis stepped to the plate in the bottom of the sixth and notched three consecutive hits to load the bases. Senior outfielder Morgan Barchan then drew a bases-loaded walk to score sophomore outfielder Kalyn Harker.

Junior infielder Taylor Orsburn followed with SIU’s third grand slam of the season to cap a late- inning rally and cut Drake’s lead to one run. However, SIU’s rally was halted as Drake picked up an insurance run in the top of the seventh, and the Salukis failed to score in the inning’s bottom half to end the game.

Drake hit four home runs in the final two innings and came back from a 9-5 deficit for an 11-9 win to sweep the Salukis.

With the Bulldogs down by five runs in the sixth, Drake rallied with three runs on a two-run homer by junior catcher Courtney Wood and a solo shot by sophomore pitcher Rebekah Schmidt to pull the source within 9-7. Drake then picked up four more runs in the seventh as sophomore outfielder Laura Brewer hit a game-tying two-run shot, and junior pitcher Jordan Gronewold later hit a two-run deep ball to put the Bulldogs up by two.

SIU failed to score in the bottom of the seventh to end the game.

Wilson went 2-for-2 with a pair of RBIs to lead the Saluki offense while Orsburn went 2-for-4. Junior catcher Allie VadeBoncouer went 1-for-1 with three walks, and Spivey scored twice.

The Salukis will return to action Wednesday to host St. Louis in an afternoon doubleheader.