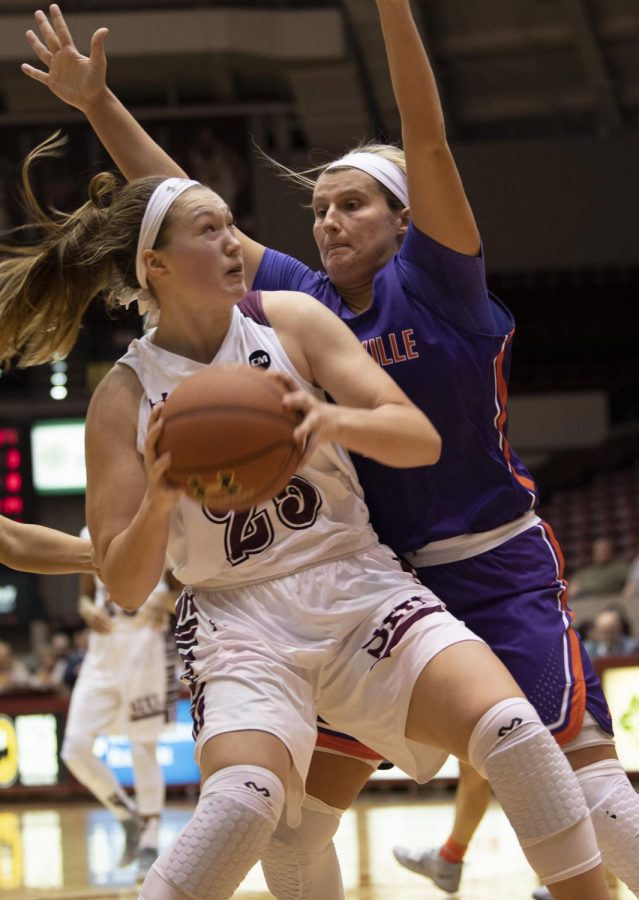 Sophomore forward Abby Brockmeyer tries to break through the Aces’ defense on Friday, Jan. 4, 2019, during the Salukis' 47-64 win against the Evansville Purple Aces at SIU Arena.

In their first matchup of the season, Saluki women’s basketball fell 65-52 to the Eastern Michigan Eagles on Wednesday at the Banterra Center.

Eastern Michigan only brought nine players to Carbondale but were able to pull out the win behind a 26-point third quarter performance and24 points and nine rebounds from senior guard Areanna Combs.

“She’s very athletic and quick on the floor, she can shoot that outside shot and she’s got good length to her so she can shoot over a smaller quicker guard, but at the same time if you put a guard on her she can take them to the hoop,” Saluki head coach Cindy Stein said.

Stein said she thinks playing against Combs will make the team better down the road.
EMU also had 16 points from junior guard Jenna Annecchiarico.
The Salukis were unable to stay in an offensive rhythm and struggled from the three-point line, shooting six-for-23.

Stein didn’t think the Salukis shot selection was good today and said the team wasn’t prepared for shooting off the catch.

“We took a lot of shots out of character, not being controlled on the drive. Things that we’ve worked on since August, but you get sped up sometimes in games for the first time but those are things that are easy to be managed and I think we’ll be better against Memphis,” Stein said.

SIU came but and had a strong second quarter and got on a 10-2 run to take over the second quarter. Behind three pointers from junior guard Caitlin Link and senior guard Makenzie Silvey.

With 3:27 left in the first half, the Salukis led the Eagles 26-19. After the Eagles got a layup at  3:08, both teams went scoreless until a three pointer from freshman guard Quierra Love with 56 seconds left. Then a buzzer beater for the Eagles from Annecchiarico cut the Salukis lead to 29-23.

The Eagles came out strong in the third quarter, scoring early and tying the game up at 33 not even halfway through the quarter with a three pointer from junior guard Nitalia Pineda and a free throw from Annecchiarico.

Over the next four and a half minutes the Eagles went on a 14-5 run to open up a 49-38 lead on the Salukis late in the third. Silvey was able to make a buzzer beater three to end the third and cut the deficit to 49-41.

SIU wasn’t able to score enough in the fourth quarter to cut into the lead getting only eleven points and being outscored by the Eagles who scored 16.

The Salukis will look to find their first win Nov. 29 on the road against Memphis.