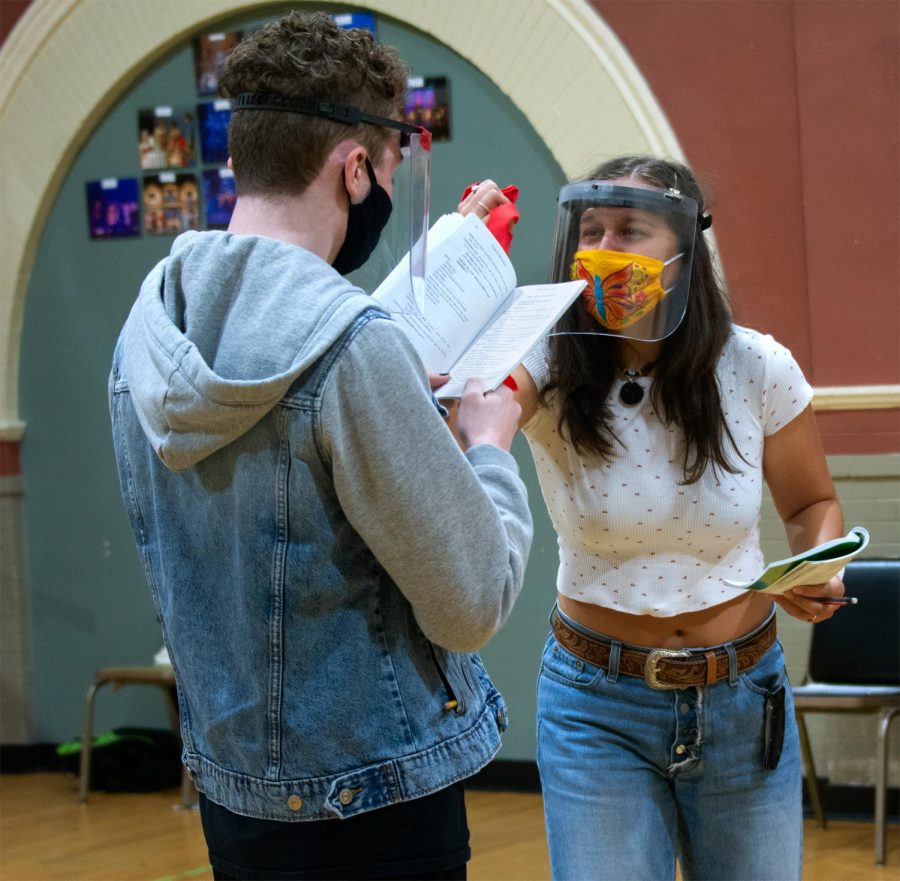 Amriela D-Alessandro, 21, rehearsing for Tuck Everlasting as her character, Mae Tuck, Sept. 24, 2020, at SIU, in Carbondale ILL. “It’s weird that we have to be farther apart and that we don’t have everybody,” Nowark said.

The costume design team at SIU has adapted to the challenges presented by the COVID-19 pandemic. Over the last several months the team has spent long hours creating garments for the spring musical, Tuck Everlasting, directed by Steven Tabor.

Theater is a collaborative art from scenic designers, directors, actors and costume designers. Costume design contributes to storytelling in the theater world. Whether it’s a production, a play or musical, the costumes can reveal a lot about the character’s personality.

Pivovarnik’s role as Costume Shop manager includes delegating tasks throughout the build process of a production.

“It is all maintaining our current costume stock and storage as well as maintaining the tools, the sewing machines, it also involves doing inventory and ordering supplies,” Pivovarnik said.

Pivovarnik said she loves being able to work in academic theater.

“What’s great about our program is we really allow students to work on real shows not just theoretical shows. I have the opportunity to share what I love and inspire students. That’s what always gets me going in the morning. It’s being the click for somebody and to see students changing on the daily is powerful and empowering them to grow,” Pivovarnik said.

Jessica Rigdon is a third year graduate student working towards her MFA in costume design and costume designer for Tuck Everlasting.

Rigdon is working on Tuck Everlasting as her thesis project. She said research is a large part of the costume design process and includes analyzing shapes, colors and time periods.

“I like to read plays or musicals usually three or four times. If it is a musical I will listen to the soundtrack on repeat because it really helps me get a feel of what’s going on in the production,” Rigdon said.

Rigdon said she finds inspiration from colors to demonstrate the character’s background and personality.

“For example there is the Tuck family and they’re all in very deep saturated earth tones because they are all very grounded in who they are. Whereas on the flip side, the carnival people of tuck are in these bright almost synthetic colors, very bright and harsh because they’re just very disingenuous,” Rigdon said.

Ryann Willard is a second year graduate student working towards her MFA in costume design at SIU, Willard teaches Theater 101 and is also working on building costumes for Tuck Everlasting.

After working with color, Willard said the costume design team usually looks at shapes and silhouettes of what the characters will look like on the outline.

“A lot of times we use pictures of artwork or modern pictures that evoke a feeling. We do a lot of research on architecture or design of the time,” Willard said. “I did a lot of research into the psychological  meanings behind shapes”

Danielle Silfies is a first year graduate student at SIU and is listed as a first hand for the Tuck Everlasting costume design team.

Once the research is completed production design meetings start with the director, scenic designer and makeup,  Silfies said. Design meetings for Tuck Everlasting started in March via Zoom.

“You go through this with them to create a unified project. You start to create your design and form the world of the characters by doing thumbnails first. Then from there there are small adjustments that have to be made to fit the production based on what the director says,” Silfies said.

Thumbnails are about three inch tall uncolored sketched versions of the ideas of the costume Silfies said. After the thumbnails are completed and approved the design team begins working on roughs of each costume.

“Roughs are essentially rough drafts of the finalized costumes. This is the more thorough depiction of what you’re hoping to achieve with your design,” Silfies said.

Willard said that renderings are the final step before beginning the build process where the team begins making the costumes for the production.

“Renderings are a huge part of what we do as designers. We might do it in black and white and then go in and color it and add pieces of fabric. So the director or the lighting designer can see the actual fabrics we plan to make it in,” Willard said.

Once all the designs have been finalized the design team makes a spec sheet.

“A spec sheet is a little drawing of every piece of the garment and instructions about exactly how it should look and should be made,” Willard said.

Willard said the team doesn’t always hand create the costumes on their own. The design team has a large stock in the back room that is full of garments that have been bought or built throughout the years.

“We always look in the stock first. We look around and go, what do we have that we can use. We might use it as is or take it apart and build it in another way,” Willard said.

Items in the stock room are not stored by production but rather by the time period of the item.

“All of our women’s wear is organized by time period because women’s shape is very distinct for each of the different periods but alot of our men’s wear is separated by collared shirts, suits versus jackets and size because a lot of times when you’re pulling from stock you want to get something that fits,” Rigdon said.

Willard said as the costume designer for Tuck Everlasting, Rigdon provides Jane, the shop manager, with information about how she wants things to look and be done.

“Mostly in the shop the designer kind of oversees things and works on certain special projects mostly she’s there for us to ask questions when we’re making things and to pick out every detail. Her and the director worked really closely to make a lot of the costume choices,” Willard said.

Pivovarnik said the costume shop has its own division of labor. She said she has to match a project that will challenge the person building a garment but not overwhelm them based on each person’s capabilities.

“I got to other graduate students acting as drapers. They are the person in charge of drafting and creating the pattern. They may have below them a first hand who cuts out the garment and then a sticker who finally puts it together,” she said. “We have some undergrad students who are ready to be first hand and stickers but may not be ready to be a draper.”

Muslin fabric is a cheap thin fabric used to make any adjustments instead of on an expensive fashion fabric, according to Rigdon.

“So then you have a mock-up fitting, any pattern alterations based on fit will come from that mock-up on to the paper pattern. Once that’s been done they will take the paper pattern and recut it out of the final fabric,” Rigdon said. “Then that will get put together and we will have another fitting  for final alterations. Then it gets finished and then it’s a garment.”

Pivovarnik said that costume design for theater is different from television or film.

“We can’t shout, cut or hold. We have to be able to transition seamlessly. There is an eye to building things so that there are no blips in the flow of the production, Pivovarnik said. “Theatrical lighting is different from lighting for tv. It’s often a stronger and bolder choice. We need costumes that read well and are able to tell the story under stronger lighting choices. These are all factors we have to consider and we have to work collaboratively with the scenic and lighting elements.”

Pivovarnik spent the spring and summer of 2020 researching how to adapt the costume design program to COVID-19 safety restrictions. She also rearranged the costume shop and reworked the schedule she said so that the team could spread out throughout the week.

“We don’t have fittings back to back to back so we can properly sanitize the fitting room. We have proper PPE not just having masks but having a face shield when you need it. We have plexiglass dividers between the sewing machines. We have a sink in the shop so we’re able to take hand washing breaks. You walk in the shop and you wash your hands,” Pivovarnik said.

The costume design team for Tuck Everlasting made masks for singers that allowed for more airflow while abiding by COVID-19 safety restrictions according to Rigdon.

“The singer’s mask was brought up by the music director. He had seen other departments doing that style of mask for choir concerts so we thought we could integrate something similar into our show. So Jane did a lot of development for a pattern,” Rigdon said.

The costume design team has developed multiple creative ways to work around COVID-19 restrictions but still accurately tell the story of the musical.

“I think otherwise the look of the show can still be similar but they have incorporated some ribbon because of the six feet apart. They wanted the ribbons to coordinate in color to demonstrate connections between characters,” Willard said.

Pivovarnik said she has had to adapt her teaching methods.

“We’re also doing a lot of coursework through zoom. There are definitely things I’m glad I get to incorporate into my coursework in the future that I don’t think I would’ve thought about without the pandemic,” Pivovarnik said.

Pivovarnik encourages all students at SIU to take costume classes.

“We have a big variety of costume classes but it is not just costume interested undergraduate, costume MFAs that take them, we also have scenic designers and technical directors take our classes,” Pivovarnik said. “The department offers a pretty well rounded theater education. So any of the undergrads who are interested in learning anything about costumes are very welcome to take any of my classes.”

Silfies said the long and arduous process of costume design is always worth the outcome.

“People come up to you and tell you they love what you did with the costume piece and the emotions and connections they felt it made in the production. I really enjoy hearing what people think about the connections that they made,” Silfies said. “It feeds back into why I love designing which is creating the connections between characters and helping to further the story line of the play.”

Willard said costumes are a large part of who the characters are.