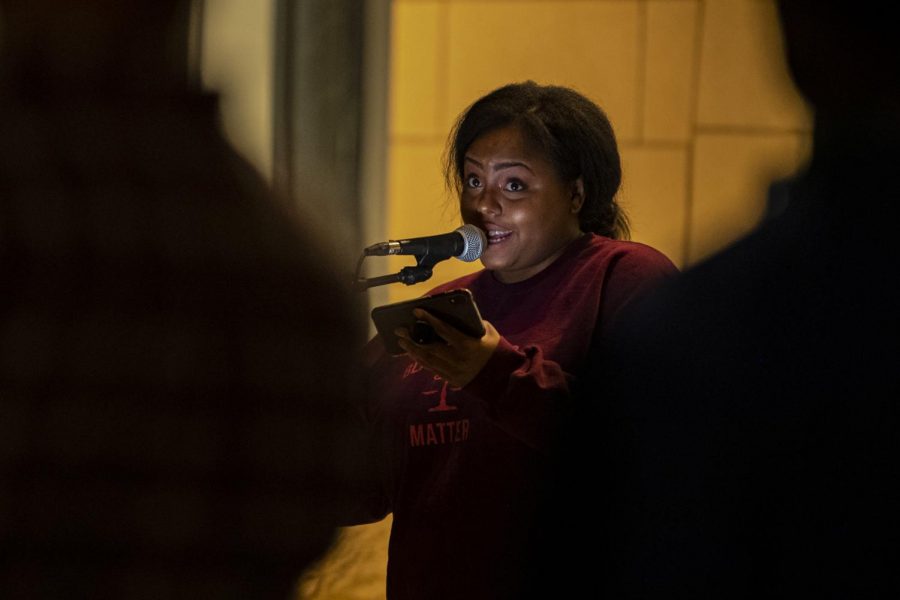 Co-organizer Jerricha Griffin, a Law student at SIU, speaks during the Justice for Breonna Taylor event at the Carbondale police station on Friday, Oct. 2, 2020, in Carbondale, IL. Griffin speaks about the disrespect that Black women face in today's society.

Nov. 10—When Michelle Mitchell heard the news about Sen. Kamala Harris becoming the next vice president of the United States, she immediately told her 9-year-old daughter.

“I told my daughter about it, and she understood about us having the first Black woman vice president,” Mitchell, 44, said. “I told her that she has the same skin that she has, and was really happy and proud. She just hopes that everything works out.”

“I just hope they all do the right thing” Mitchell, who lives in Cahokia, said Harris’ win means a lot to her, being a Black woman in an underserved city with a Black-majority population. Over the past 10 years, Cahokia has witnessed a population decline of about 9%, the steepest among cities in St. Clair County.

“What it means to me is that another Brown young lady can set goals like that and follow in her footsteps,” Mitchell said. “When they see her on TV and they acknowledge her as a Black vice president of the United States, that would give them some goals to achieve. “It’s positive and it’s really hard to explain, but it’s going to give our Black women and Black children in this community some positivity in their life.”

Mitchell hopes that the representation of Harris’ win translates into tangible policy for Black people.

“People can say stuff, but actions are louder than words,” Mitchell said. “So you can say all of that stuff, but we want to see once you come into office in January. They promised a lot of stuff and we want to see that when they enter The White House.”

Sharon Smith, who lives in nearby Centreville, said she was shocked, yet excited about the historic news. Centreville also is a Black-majority town.

“I just hope they all do the right thing,” Smith, 55, said. “We don’t know how it’s going to go, but I’m happy they won. I’m hoping that it’d be better than what it was before.”

Smith is among the Centreville residents who struggle with floodwaters in their community when there is a heavy rainfall. Many homes have faced extensive damage during heavy rains as a result of crumbling infrastructure, and residents have complained that over the years, government officials have done little to help them.

After a storm in July, Smith told the Belleville News-Democrat that she couldn’t get into her home and had to miss work the following day because of flooding.Smith said she hopes new policies enacted through the Biden-Harris administration help her city.

“I hope they can solve some things with this virus and with kids going back to school because it’s really bad over here,” Smith said. “I also hope that something gets done to help fix the flooding here. It hasn’t flooded over here recently, so we’re good right now. But when it rains, it’s bad.”

The power of representation Harris is also the first member of the Divine Nine, the nine organizations that make up the historically Black sororities and fraternities, to be elected vice president. She’s a member of Alpha Kappa Alpha Sorority, Incorporated. Additionally, Harris is the first graduate of a historically Black college and university to have the position of vice president. She attended Howard University in Washington, DC.

Wyvetta Granger, who’s a member of the same sorority, is the co-pastor of New Life Community Church in East St. Louis. She said Harris’ position offers an opportunity for the work of Divine Nine organizations to be recognized on a national level.

“Being the first woman to hold that position is definitely a high honor, but what we saw even more and what was more exciting to see was how women in the Divine Nine came together to be a part of a movement such as this,” Granger said.

“It was a great movement for all the sororities and fraternities. It was everybody engaged and supporting this action. “What I would hope for is that it would give us a chance to have a seat at the table on issues and matters that are important to Black people,” Granger said. “I’m hoping that it would show that we should be considered for what we can bring to the table. “I think so many times our support, or the power that we have, or the influence that we have, is overlooked, and what I’m hoping that this does is that it shows is that it’s not just this group of people, but is that we do have influence and movement behind our organizations.”

Melody McClellan, who lives in O’Fallon, is also a member of the sorority. She said having Divine Nine representation in the White House will be inspiring to witness.

“When you think about it, the Divine Nine was created out of a need to be able to support the community, and that’s what we do,” McClellan said. “And just to have her represent that in who she is is a beautiful thing. And think about how the Divine Nine came together to support her. She brought people out to vote based on that as well. She can be any of us, and I think it provides hope. This provides hope for all of us that are walking on this earth that your dreams are possible.”

Alorton Mayor JoAnn Reed said she was inspired to see a Black woman win a powerful position like vice president of the United States.

“I’m just so mentally happy,” Mayor Reed said. “Just for all women, not just Black women. We’re necessary and we’re valuable in leadership. It’s scripture. We were designed to lead.”

Reed said she hopes Harris’ position can reiterate the need for Black women in male-dominated positions to be respected.

“I’m often treated as a sex object, and I simply regret that,” Reed said. “It’s very hard for me because I am not a single woman, and so I don’t want to be a topic of any locker room conversation. “I just have to be extra careful. Rather than take my leadership and ideals, they take my good looks and sex appeal, and they qualify me on those things, but I don’t live on that. I don’t sit on my brain. I just want to be able to add what I can add and that’s valuable. I think women in powerful positions is a necessary component.”

State Rep. Latoya Greenwood of East St. Louis said she wants Harris’ position to serve as an example for more women in elected positions who may feel discouraged to be more vocal about their ideas.

“It shows us as women who are in public service and in elected positions to keep going and keep representing the people,” Greenwood said. “We don’t have to water down ourselves to be in the room, but just to be there on behalf of the people is what we should be striving for. She has shown us that we are able to do anything that we set our minds to.”

Is representation enough? Before becoming vice president-elect, Harris’ record as a former California prosecutor became a target of criticism directed toward her during the campaign. Her controversial truancy program, which allowed parents to be charged with a misdemeanor if their child missed 10 percent of the school year without a valid reason, along with other “tough-on-crime” policies she supported, became a topic of discussion when she was running for the Democratic nomination for president.

Greenwood said now’s the time to remedy that situation for the Black community, although she understands the context behind why those policies existed.

“I think we have to remember and acknowledge that during that time we did have communities of color being devastated by drugs,” Greenwood said. “It was impacting our communities in such a negative way that I think all of the government at that time supported those policies. “So now we’re in 2020 and we recognize that there were some inequities in the way cocaine (sentences were) handed out and that a majority of the people incarcerated (for that) were Black men. We know that now it’s 2020, so we’re moving forward to rectify that situation.”

For NZinga Medley, Harris’ historic position doesn’t bring any hope. In fact, the East St. Louis native said she was indifferent when she heard the news.

“Basically, I just feel that everything’s the same regardless of who’s in there,” Medley said. “Some people present things better or (they’re) better at appealing to the masses and proving they are favorable. I feel, with most officials in elected positions, everything’s already decided before it gets started and pretty much the same thing is going to happen. Some people just sugarcoat it better.” “I’m afraid that, while the representation’s there and may open doors for Black women in other areas, I think it kind of gives a false impression that we’ve arrived and Black women have arrived.”

Medley, who’s a kindergarten teacher, is a graduate of Hampton University, a historically Black college. She’s also a member of Delta Sigma Theta Sorority, Incorporated. Although she is apathetic toward the election and the news of Harris making history, she said she takes a bit of pride in seeing historically Black college and university and Divine Nine representation in Harris.

But she’s more concerned about what the new administration will mean for her city. First on her list: more investment in underfunded schools.

“I want to keep the faith that there will be a positive change, not just in terms of opening up doors for Black women, but in terms of things actually changing,” Medley said. “Even though I’m indifferent and don’t have a lot of hope, there is this glimmer of hope that something good will happen for our people from her and Biden. “As a teacher you just see that they’re rewarding schools that are doing well and taking funding and the much-needed activities out of those low-performing schools and they’re supposed to be basing funding off the population. A true investment in the foundation of our youth is what’s needed.”