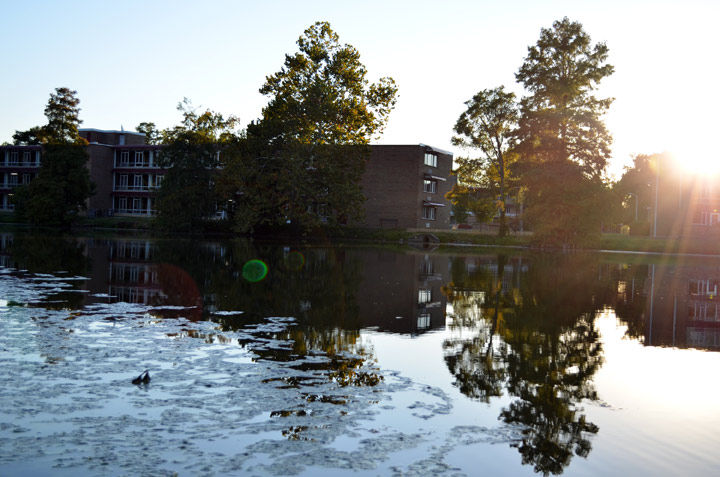 By Ryan Scott and Dakota Bowen

Vibrant foliage and Campus Lake are paramount to the ambiance of the Southern Illinois University Carbondale campus.

The lake, created in the 1880s as a local ice supply, serves a vital role on campus. Purchased by SIUC in 1955, it became a recreational spot popular for boating and fishing after then-university President Delyte W. Morris developed the area with trees and a walking path. Students also used it to cool off by taking a dip in its waters.

About 10 years ago, however, Campus Lake became an eyesore and a health hazard. It contained toxic algae blooms and harmful microbes that posed a health hazard for humans and dogs and had to be drained and refilled.

What happened to the lake brought home to SIU the effects of global climate change, just as torrential flooding and other events have brought them home elsewhere in Illinois. Though far from East Coast hurricanes and California wildfires, the state is no stranger to global warming and no latecomer to studying or coping with its effects. In fact, Illinois is home to the nation’s first program to define the environmental and socioeconomic effects of weather and climate conditions—information that’s proved invaluable in estimating climate change’s future impact.

That pioneering climate program was launched by the Illinois State Water Survey, which also is known for its scientists’ sharing in the 2007 Nobel Peace Prize for their work with the Intergovernmental Panel on Climate Change. This month, the water survey marks its 125th anniversary with seminars around the state, including some this month at SIU.

The university and water survey have long had close ties. State climatologist Trent Ford—newly appointed to the position in August 2019—was an associate professor in the Department of Geography and Environmental Resources at SIU. Other professors in the department who study and teach about climate change also work with the state water survey.

The Illinois State Water Survey was created in 1895 and oversees everything from wells and private lakes to public bodies of water such as Campus Lake. In the beginning, its primary job was mapping where water could be found so Illinois residents might access it.

Another early goal of the survey was to trace where typhoid fever was coming from and how it was spreading. In the 1930’s, the state water survey worked hard to come up with a solution to the water shortages from the Dust Bowl—the drought-stricken Southern Plains region of the United States that suffered severe dust storms during a dry period in the 1930s that killed livestock and doomed crops.

The water survey today focuses on how the climate is affecting the water supply, as well as water contamination and other issues. It also studies the effects climate change could have on the state’s water supply, lakes and rivers.

SIUC professor Ruopu Li said he thinks there could be severe effects to water resources because of irrigation and how that can pollute the water system.

“In the Ogallala Aquifer pipeline pipelines in the middle and southern part, you will see, you know, a lot of stress for the agriculture, so it’s highly without the irrigation. I think the same thing happened to the Central Valley California as well,” Li said.

According to Li, there could be more algae growth, as a result of climate change, that could do harm to the water supply.

Some of these majors, according to sustainability-education graduate student Nick Erwin, include microbiology, fisheries and aquatic conservation, environmental geography and sustainability, engineering, architecture, psychology, and agriculture.

Schauwecker has been coordinating the Green Fund for the last few years.

“She decides where the money from this bottom-up approach goes,” Erwin said.

Funded projects have ranged from events, graduate and undergraduate research, to long-term investments in facilities on campus to ensure a sustainable future for the SIU campus.

“The Green Fund helps to create a more sustainable campus and its multifaceted research and applications, including water quality,” Erwin said.

Such efforts make a difference, according to Duram.

“Every time you turn on the light switch or drive your car you are creating greenhouse Gasses and increasing the planet’s temperature,” she said.

Chloe Neal, a junior at Southern Illinois University, said she has noticed the climate change in Carbondale over the course of just three years at SIU.

“I love Carbondale, I do,” Neal said.“But I do have asthma and allergies. My asthma can act up bad and has landed me in the hospital many times, especially in the summertime.”

The Daily Egyptian News Desk can be reached at [email protected]