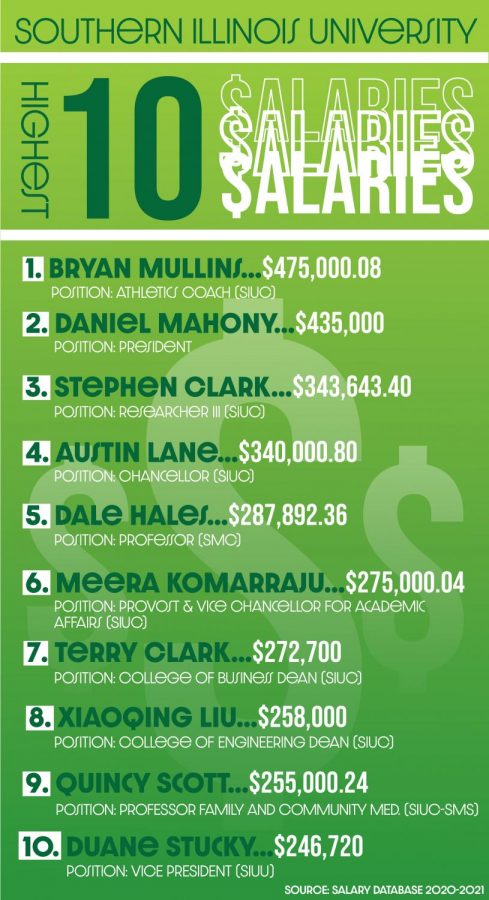 Over 3,200 individuals receive salaries from SIUC, SIU School of Medicine and the SIU System office.

According to the salary database, the highest salary is earned by Bryan Mullins, the head basketball coach for SIUC. Mullins earns a base salary of $475,000 a year as per his contract, not including bonuses.

The third highest salary is earned by Stephen Brent Clark, affiliated professor and researcher III at SIUC. Clark earns a salary of $343,643 per year.

SIUC chancellor Austin Lane receives the fourth highest salary at $340,008 per year, or $3,600 below the next highest earner.

Dale “Buck” Hales, a professor of physiology at SIU School of Medicine, is the fifth highest earner in the database, netting a salary of $287,892 a year.

Terry Clark, dean of the SIUC College of Business, earns the seventh highest salary, at $272,700 per year.

Xiaoqing Liu, dean of SIUC’s College of Engineering, earns a yearly salary of $258,000.

Quincy Scott, professor and director of Family and Community Medicine – Carbondale, earns a salary of $255,000.

The 10th highest earner is Duane Stucky, vice president for financial and administrative affairs of the SIU System. He receives a yearly salary of $246,720.

Editor Rana Schenke can be reached at [email protected].