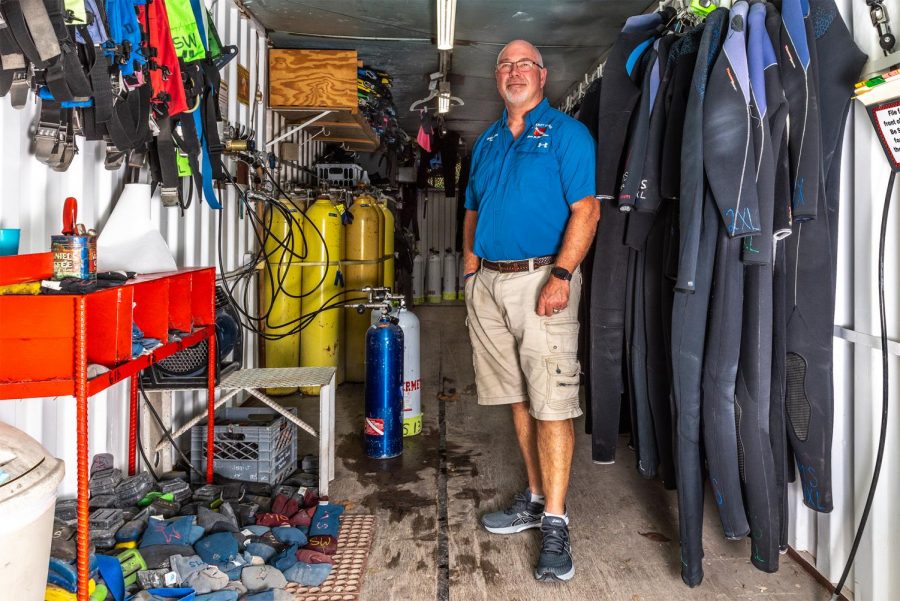 Glen Faith, the owner of Mermet Springs, poses for a portrait in one of the air tank refill stations on-site Thursday, Oct. 22, 2020. “My ideas, if I was going to open up a quarry, I really wanted it to be a scuba destination where dive centers could come, instructors could bring their students, there was professionalism, there was adequate equipment for rental, and air fills were efficient,” Faith said, “We fill probably 3-4 maybe 500 cylinders this past weekend. No one waited more than 10 minutes for an air fill.”

Twenty-four years ago, Glen Faith, retired secretary of police and owner of Mermet Springs, decided to start a 40-acre scuba diving destination outside of Belknap, Ill.

“My goal when I started this facility was not to be another quarry operation. Lots of quarries kind of have a guy sitting on the back of a tailgate of his truck with a can out there collecting money and chewing tobacco,” Faith said.

Faith has added many new amenities that take his diving business to the next level and truly allows people to “Dive in First Class.”

“I started my diving career on our secretary of police dive team so I learned to dive back in 1988,” Faith said.  He completed his first dive training with Pete Carroll at SIU.

After getting transferred to Vienna, Ill., his neighbor told him about a quarry in Massac County. After checking it out, Faith decided to become an instructor and train his own students.

“I figured that if we had just enough people on the weekends to pay the insurance and the bills, had a really cool place to train my own students, then life was good,” Faith said.

Mermet Springs trains people to scuba dive and offers courses from open water beginning divers to courses to become an Instructor-Trainer. The staff train locally and are also a training destination for dive centers who teach the courses at their facilities and then go to Mermet Springs to have open water training.

“Last weekend, over a two-day period, we had more than 500 divers here,” Faith said, “We’ve grown, we have over 50 people on our staff, more than 25 instructors, we’re starting to teach at SIU.”

Faith said that they also have a lot of people with disabilities who come and experience scuba diving in the quarry.

“You’d be amazed how many people we have from the military, missing legs and things like that,” Faith said. “It’s amazing because in the water you’re weightless, and you know, even if they don’t have legs […] they can usually swim. It’s got to be an amazing thing to be able to move again.”

Faith takes pride in always trying to improve the facility. “Safety is the most important thing, my background in law enforcement, you know, it’s about professionalism and safety,” Faith said.

By installing a set of two speakers into the facility, guests hear emergency announcements above water as well as at the bottom of the quarry. Faith said that he can call people to the surface by name in case of an emergency.

There is also a system of ropes and signs in the water in case someone were to get lost on days when the water isn’t as clear.

Faith said that they also have a full-time service technician and spare parts to repair equipment.

“My ideas, if I was going to open up a quarry, I really wanted it to be a scuba destination where dive centers could come, instructors could bring their students, there was professionalism, there was adequate equipment for rental, and air fills were efficient,” Faith said. “We fill probably 3-4 maybe 500 cylinders this past weekend. No one waited more than 10 minutes for an air fill.”

Faith has also added other unique objects for divers to enjoy while in the quarry. Using inflatable lift bags, he has sunk a school bus, motorcycle, fiberglass shark, underwater petting zoo, ambulance, semi-truck, train car, firetruck, 727 passenger jet airplane, and more into the quarry for people to swim around and through.

Although Mermet Springs is a large, 40-acre facility, many people don’t know that it’s there.

“Really we live right by here, like 15 minutes away from here and it’s crazy because we never knew this was here until last weekend,” Haley Robison, a Vienna, Ill. local, said. “I’ve never really seen a place that you can go scuba diving like this before.”

There are six to seven-foot-long paddlefish, catfish, bluegill, rainbow trout, bass, crappie, etc. in the quarry.

Guests can bring packs of hotdogs to feed the giant fish underwater or on the dock.

These fish have also attracted a national audience when Zeb Hogan filmed an episode of Monster Fish for National Geographic at Mermet Springs.

Although the fish have received a lot of publicity, the gem of Mermet Springs is a different underwater attraction.

The jet in itself is enough to draw attention, but the fact that Faith bought it from a Warner Bros. movie set for $1 draws much more attention.

The crew had just filmed the plane “crash” for the movie U.S. Marshals featuring Wesley Snipes and Tommy Lee Jones outside of Bay City, Ill. and were looking for a cliff to film another scene in the movie. In exchange for allowing the crew to use one of the bluffs near his quarry, Faith was granted ownership of the jet.

After paying Warner Bros. $1 and signing a contract, the jet was placed on a barge in Metropolis, Ill.

Faith said that he had seven days to figure out how to get the jet into the quarry before he was charged $1,000 per day to keep the jet on the barge.

To be able to transport the jet, they had to cut it in half and then bolt it back together after getting it to the quarry.

Using lift bags, ropes, and a custom made trailer out of an I-beam, they were able to position the jet into the quarry.

Faith said that he can’t imagine his life without diving and that it is a good way for his family to connect underwater for a couple of hours without having any distractions.

You can see 30-40 feet up and down while looking at the natural rock wall in the quarry.

“Imagine going to the grand canyon and going out on one of those little outcroppings where you walk out and look over, jumping off or stepping off and not falling and just being able to go over the Grand Canyon gliding,” Faith said.