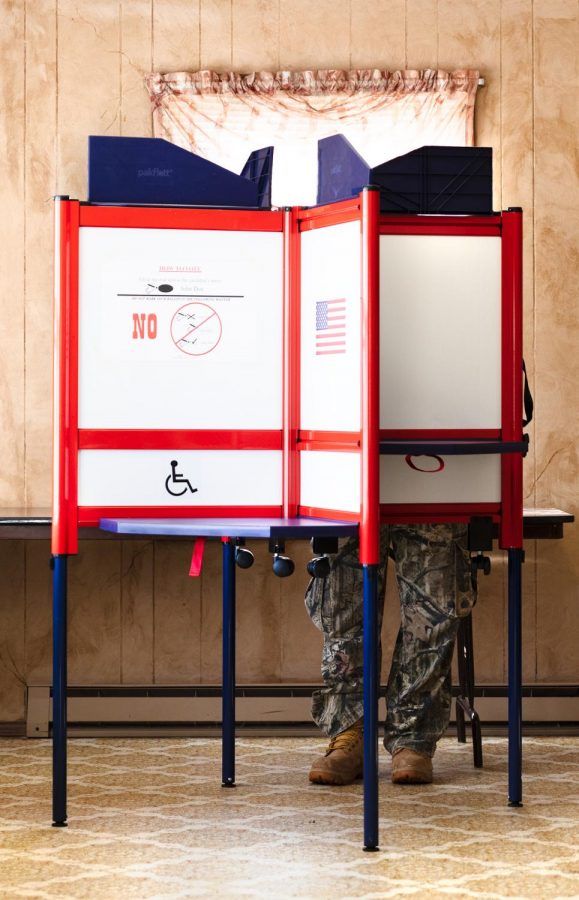 David Hester stands at the polling booth at the Senior Center in Belknap, Ill. Tuesday, Nov. 3, 2020.

River Region Reporter, Slaten Swords, sat down with the director of the Paul Simon Public Policy Institute, John Shaw, over Zoom and asked him about his thoughts concerning the 2020 election.

A transcript of the interview can be found below.

River Region: How is this election different than past elections?

Shaw: Well, I think this has been a hugely different election for a couple reasons. One, for the first time in at least a century, it’s occurring against the backdrop of a global pandemic. The pandemic is hitting the United States at a really acute time now, including in some of the key swing states, where you have COVID just ravaging communities.

You have the backdrop of a pandemic, you have an economic crisis that is easing but is still quite acute, you have the country probably as polarized as it has been in many many many decades.

People do not view this as an election as between two reasonably acceptable alternatives. You know, if you’re a democrat, you prefer your person but you mildly disapprove of the other person. I mean for Democrats, they believe the re-election of Donald Trump would be a devastating set-back to the country. Republicans believe that it’s utterly essential that the Democrats be defeated and President Trump be returned. Very few people are neutral. It’s not like there’s people who have mild preferences. They have very very strong feelings on this election.

So all these things coming together, a pandemic, an economic crisis, very passionately held views, and polls that show a very close race.

And then I guess the final factor is the president of the United States has effectively said, if he doesn’t win, he will dispute the outcome of the election.

So all of these things make this, I think you can say an unprecedented election.

River Region: When should we know the results of this election?

Shaw: You know it’s hard to know. I mean it could be late tomorrow night Tuesday night, or it could be some days. I mean there are several three or four critical states. The final outcome of them may not be known for several days. But if, for example, Vice President Biden is doing better than expected and it seems in some of these states and it seems like he’s gonna win in Florida and Georgia and North Carolina, Wisconsin, Michigan, Pennsylvania. If it appears that he has won those states, we could have a winner tomorrow night declared.  But it could be that this outcome is going to be unknown for several days at least.

You know there’s never before had there been so many mail-in votes. Each state has a different set of rules about when you count these votes etcetera.

The short answer is we could know tomorrow night by about 11 o’clock or it could take us well into the week, if not later, and then of course you have other processes where the electoral college would be to confirm the results and so forth.

So it’s hard to know if this will have a good sense tomorrow night, or whether the outcome will be in dispute for several, several days at least.

River Region: You also brought up, Trump has said that the whole peaceful transfer of powers is up for question. Could you see that stalling the results even longer?

Shaw: I think you know if  Vice President Biden were to win, and you know President declined to concede or signal that he’s not going to cooperate and the transfer of power, I mean obviously the country would go through a difficult unprecedented time that’s never happened before.

You know President Trump’s term expires on January 20 2021. And after that date unless he is sworn in again, he will not be the president of the United States. And even though he’s trying to cloud and complicate that, you know, the Chief Justice of the United States will swear in the next president, you know whatever happens I don’t think it would be in the country’s interest, to put it mildly if President Trump is defeated that he did not accept the results. I mean that has never happened before in our 230 plus year history. it would, you know, obviously, raise tensions even greater. You know, particularly since the President has basically said if he doesn’t want the election is rigged.

That will clearly energize his supporters and, who knows what would ensue from that. We’re entering a very difficult complicated time, and it’s not clear at all, how these next couple of weeks are going to unfold.

Vice President Biden is deeply experienced, obviously. He has good lawyers who have been briefed and are ready to go. I mean he has a transition team so if anyone could move seamlessly into the presidency I think it would be, you know, Vice President Biden. He’s been there. He’s been government service for many decades. But, it’s just, it is unclear and if President Trump, you know, declines to concede or if he wins reelection, a whole different set of circumstances rising.

River Region: You touched on tensions rising.  One of the contentious points is you know the whole mail-in part of it. Why is there so much concern with the mail-in ballot?

Shaw: Well I would say two things. One, the volume is much much heavier this time around, than ever before, in large part because of COVID. And the anticipation that voting on election day you know might be complicated etc.

And frankly, the biggest point of contention has been the President Trump has raised an issue that really hasn’t ever been raised before. I mean, in fact he’s voted by mail, but I think he just, I think he knows that likely the bulk of the mail and votes would be likely be Democrats, you know who will likely support his opponent, so I think he’s raised this issue frankly just as a tactical ploy to complicate things.

I don’t think there’s any evidence at all that mail-in ballots are less credible or legitimate or secure than other voting but I think President Trump has done it largely to kind of throw a smokescreen into the voting process.

River Region: Participation for this election, it seems like it’s going to be higher than before. Do you see it going out that way and then to further that do you see participation further increasing as the years go on or do you see this as kind of a one time deal that is the most important kind of election that people are making?

Shaw: Well I think a couple things. I mean I think interest is high, I mean, as I say, you know, both parties believe the stakes are enormous. And so they’re energizing their base. I mean, I don’t know about you but my phone is blowing up with texts from various volunteers and so forth from different campaigns.

So I mean I think the stakes are perceived as being high. And so the both parties are very energized and so I think that’s going to you know boost turnout, you know it’s complicated by the fact of COVID and people, not you know having some health concerns as they contemplate what to do, you know on election day so you know it’s hard to know if this is part of a trend.

When President Obama was elected in 2008 there was this upsurge in interest and passion. You know, eight years later it had dissipated sharply. Even four years later it dissipated some. Unfortunately, we have a democracy in which about half the people who are eligible to vote typically don’t vote. I think that number will be likely down this time, but we still have a horrible problem of not having people vote, and I don’t think this one election is going to solve that problem. So I think voting will be up this cycle, but I’m not sure that that necessarily suggests a whole new trend in voting participation.

River Region Evening Edition can be reached at [email protected] or on Twitter at @RiverRegionNews.